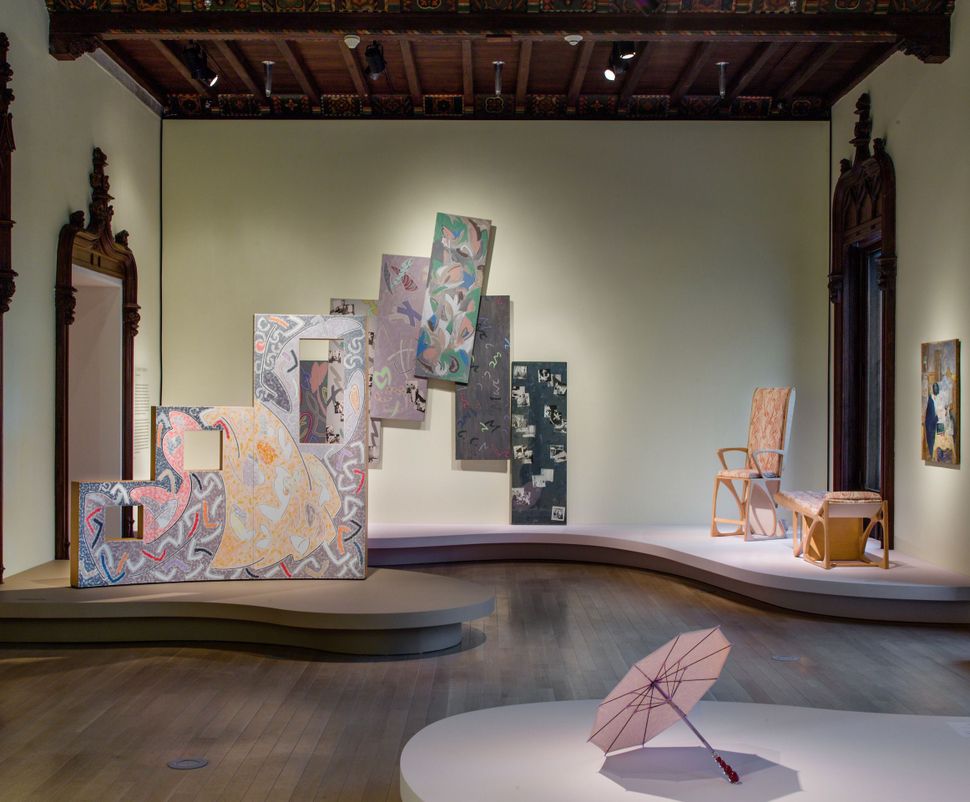 The nicest way to view the Jewish Museum’s new exhibit “Marc Camille Chaimowicz: Your Place or Mine,” the London-based artist’s first solo show in the United States, is alone. As the last straggler at a recent preview showing of the exhibit, I wandered in near solitude through the playfully arranged last section, called “Le Jardin Publique” and designed to resemble one of the winding walks in nearby Central Park.

In “Le Jardin,” whimsically-designed, improbably multifunctional furniture —a high-backed chair, for instance, that becomes a setee when pushed forward to the ground — gives way to a filmy, translucent curtain embroidered with a pattern of drifting bright green leaves. A pair of oil paintings collectively titled “A Charged Frivolity (Fading)” make dreamy companions for a bookshelf holding a set of matching volumes, their spines a mottled grey, purporting to be the “Complete works of Gustave Flaubert.” I realized, looking back through an open passageway, that the artworks on the facing short walls of “Le Jardin” both contain mirrored elements. If I stood in just the right place, I could see my torso in one and my feet in the other. 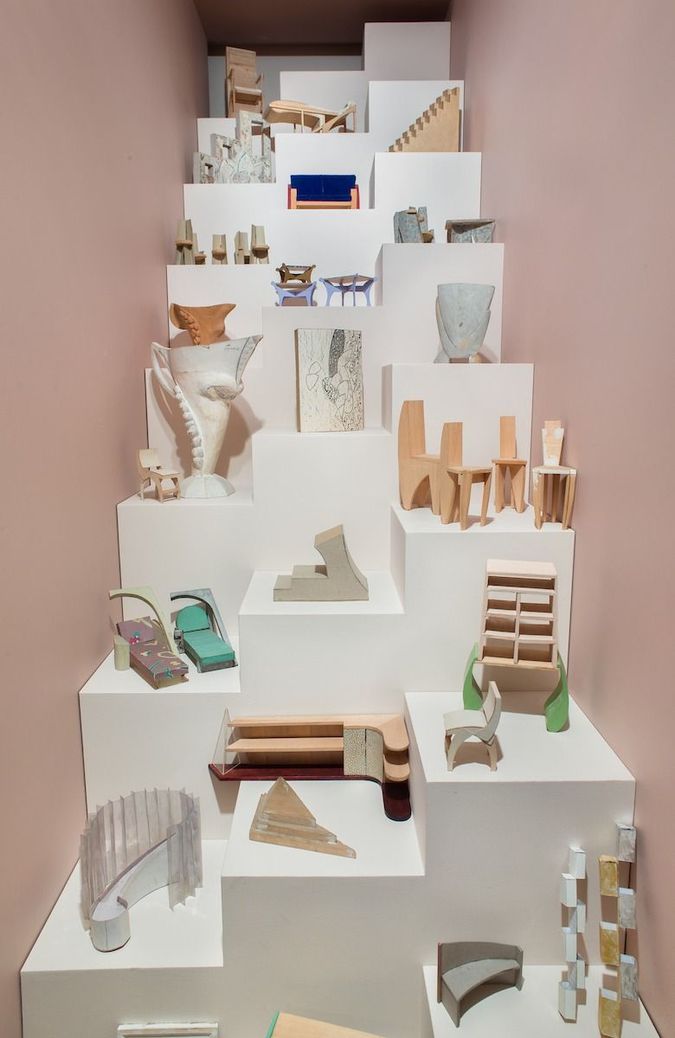 Two bits of myself in two rooms, but the whole person left a mystery: It was just what Chaimowicz might have intended. Chaimowicz’s early studies in painting ended when he left art school to see the 1968 student uprisings in his native Paris; when he returned, he did the rebellious young art student thing and burned his own student canvasses. He shifted tacks, becoming an installation artist first of the outré — a recent New York Times article described his 1972 exhibit “Celebration? Realife” as resembling “the aftermath of an explosion in a dime store or a flea market or a disco” — and then of the domestic.

He designs furniture and wallpaper; he makes carpets and curtains. He assembles photographic collages in which the same rooms are shot from a number of angles, at what appear to be a number of interrelated moments, with various bodies, rarely shown in their entirety, moving through them. A small, recessed exhibition space in “L’Jardin” houses 70 furniture maquettes, or petite mock-ups of designs, imaginative, bright and joyful. The title “Your Place or Mine” is half a joke: Chaimowicz has made the Jewish Museum his place, and visitors, by stepping into the exhibit, accept an invitation to join him. But it’s also a thesis statement. A place belongs to the person who occupies it, Chaimowicz suggests; an exhibition wall text quotes him as saying that design, unlike other forms of art, is “‘de nous, pour vous,’ from us, for you all.” The place he made is yours as soon as you enter it. And it will be someone else’s as soon as you leave.

“Your Place or Mine” is a light show, but in the weeks since I saw it, I’ve come to see it as an interesting choice for the Jewish Museum. That museum, by virtue of its mission, will never be able to stage an exhibit without having that exhibit be understood as a statement on Jewishness. That inevitability is one the Museum occasionally embraces too heartily; “Modigliani Unmasked,” the temporary exhibit that most recently graced the galleries now occupied by “Your Place or Mine,” was compromised by its curator’s wishful insistence on seeing Jewish influences where, simply put, they were not.

By contrast, there’s little beyond Chaimowicz’s name and background that marks “Your Place as Mine” as a specifically Jewish exhibit, which makes it all the more effective as such. It leaves room for visitors to meditate freely on what it means to occupy a Jewish place — a question that is, I would imagine, at least implicitly on the minds of many of those who visit the Jewish Museum — and, what’s more, a Jewish place that doesn’t demand a reckoning from its inhabitants. It asks a question: If this is your Jewish place, how do you want to live in it? This may be a minor cause for angst, but Jewish artistic institutions only infrequently allow their visitors to think in such purely aesthetic terms. Everything links to broader and more cutting questions, of history and moral obligation, of religion and tradition.

Chaimowicz’s work rarely does so, although certain entries in his collage series “The World of Interiors,” take on a winking, if not Jewish, sociopolitical inquisitiveness. (See a text-heavy page of a magazine partly obscured by a postcard of a lingerie-clad woman; Chaimowicz is playing with your focus, deliberately, and wants to know what you make of it.) He is interested, instead, in the possible inflections of emotion prompted by artistic ideas. What will viewers feel, if they enter a room composed just so? How can you make them attune to the particular quality a room takes on in the absence of a familiar body? How can an object create joy?

In “Le Jardin,” I felt a loosening of creativity, an almost childlike curiosity. I spent some time determining how much of myself I could see in those mirrors — likely more time than was appropriate — then headed for the exit. A light snow fell outside. A security guard struck up a conversation.

“It’s nice to see the sky,” she said, looking out at the park from the Museum’s large windows, which are often closed for exhibits. I agreed, and lingered for a moment before leaving. When I did, she also stepped momentarily into the hall. And in our wake, the space we left behind was changed.