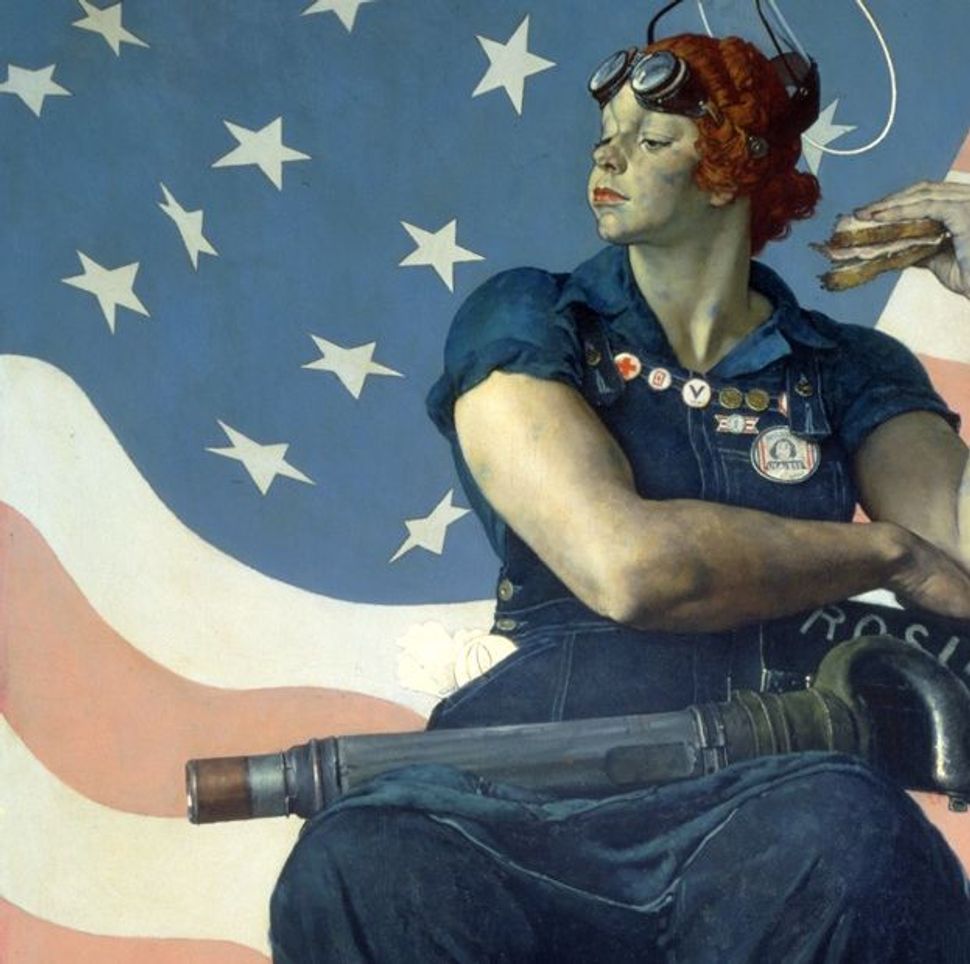 At the end of World War II, fascism seemed to have met its well-deserved end, a result far from inevitable when the conflict began. The New York Historical Society exhibit “Rockwell, Roosevelt, & the Four Freedoms,” open through September 2, reminds visitors how fragile democracy appeared at the time. While American men served overseas, women’s support of the war effort was also essential, and the most striking image advocating for women joining the war effort was that of Rosie the Riveter.

The Rosie of Norman Rockwell’s 1943 painting “Rosie the Riveter” has become a well-known symbol of feminine strength, but she first entered American consciousness in the music and lyrics of Jewish composer John Jacob Loeb and his collaborator, Redd Evans. Rockwell’s Rosie is distinct from the Rosie of J. Howard Miller’s productivity poster, made in the same year, which exhorted women workers “We Can Do It!” Rockwell’s Rosie is statuesque, her powerful pose the same as that of the prophet Isaiah in Michelangelo’s Sistine Chapel. She is wearing denim coveralls and the safety gear needed for her dangerous work, embodying the same new reality for American women that Loeb and Evans celebrated in their 1942 song “Rosie the Riveter.” Rosie’s deeds were legendary, as she worked day and night shifts to replace male workers: “Berlin will hear about/Moscow will cheer about/Rosie the Riveter,” Evans’s lyrics cheered. Yet most everyone knew a real Rosie and could identify with her commitment in “manning” the production lines. So popular was Loeb and Evans’ song that Rockwell acknowledged the titular Rosie in his portrait of the idealized female war worker, painting her name on his redheaded, muscle-flexing subject’s lunch pail. In 1943, that painting became a magazine cover, and Rosie entered American homes on the cover of The Saturday Evening Post. 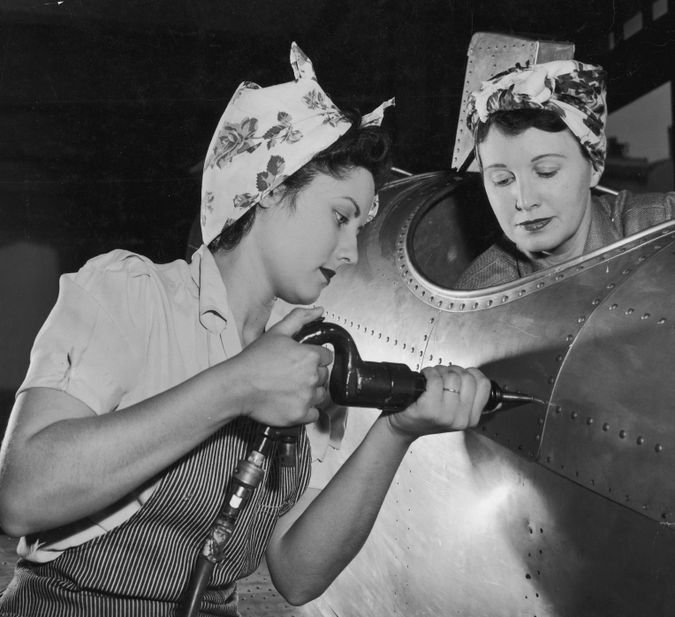 “Rosie the Riveter” was performed by several artists, including The Four Vagabonds and The Smoothies, complete with simulated riveting sounds. (Riveting is the process of joining two sheets of metal with a small cylinder, used for manufacturing aircraft and other complex structures.) Loeb and Evans begin on a note of class warfare, comparing upper class women who spend their time “Sipping dry martinis/munching caviar,” unfavorably to the blue-collar Rosie, who is “putting them to shame” by working around the clock to help win the war. Her talents are formidable. Not only does she have unfailing energy and commitment, she can outwit any foes while pounding away with her tools: “Rosie keeps a sharp lookout for sabotage/Sitting up there on the fuselage.” In fact, she is reliably more productive than her male counterparts in spite of her smaller stature: “That little frail can do/More than a male can do.” No wonder that after the War, as American women were told to close up shop and return home, many resisted, eventually leading to the start of the second wave of the feminist movement.

As for Rosie’s personal life, she has a boyfriend who is serving his country in the Marines. Rosie’s job is equally important, because without her vigilance, he could not hope to survive: “Rosie is protecting Charlie/Working overtime/on the riveting machine.” Just as Rockwell’s Rosie casually holds a sandwich, rests her riveting tool on her lap, and tramples on a copy of Hitler’s “Mein Kampf,” the Rosie of Loeb’s song is a multi-tasker who never takes a break. Rockwell’s painting shows a muscular woman, her chest covered with badges for civilian service. Loeb’s Rosie is gratified when her efforts to meet quotas are acknowledged with a coveted award given by the military to workers who contributed the highest level of production: “When they gave her a production ‘E’/She was as proud as a girl could be.” She even subverts stereotypes of women’s supposed instability, which was thought to render them unfit for work: “Everyone stops to admire the scene/Rosie at work on the B-Nineteen/She’s never twittery/Nervous or jittery/Rosie the Riveter.” 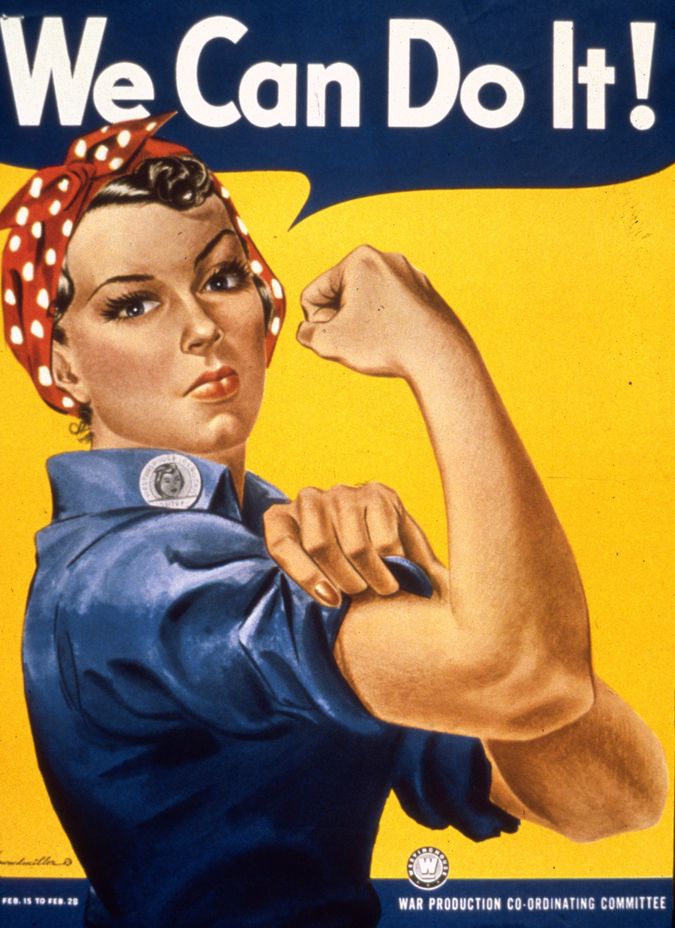 J. Howard Miller’s “We Can Do It!” poster. Image by MPI/Getty Images

Until the attack on Pearl Harbor in December 1941, most Americans were reluctant to take sides in World War II, although Jews were much less likely to be isolationist than their fellow citizens, especially as news of Nazi atrocities became public. After Pearl Harbor, popular culture focused relentlessly on winning the war, with movies, posters, magazines and songs encouraging women to abandon the passive domestic roles previously expected of them and get to work, mostly through manufacturing munitions and other supplies crucial to sustaining the war. It was in this charged atmosphere of change that Loeb and Evans’s song hit the airwaves, assuring both women and men that women’s new roles were not a threat, but just an extension of American pragmatism and optimistic attitudes. Rosie was prepared to prove that giving up high heels and nylons was not a rejection, but an expansion, of her feminine role, as she produced munitions both for the U.S., and its allies: “What if she’s smeared full of oil and grease/Doing her bit for the old Lend-Lease/She keeps the gang around/They love to hang around/Rosie the Riveter.”

Did Loeb’s Jewish background play a role in his co-creation of Rosie? The composer was from Chicago, where his father, Jacob Moritz Loeb, was a prominent businessman and philanthropist. The elder Loeb was a founder of the Chicago Hebrew Institute and served as vice-president of the Jewish Welfare Board, an organization that would serve the needs of Jewish soldiers and veterans in both World Wars. According to the Universal Jewish Encyclopedia of 1942, he was involved in adding Hebrew language to the public school curriculum and succeeded in having a school named after Theodore Herzl. Yet the degree to which John Jacob Loeb’s Jewish identity influenced his work during the War remains unknown. “Rosie the Riveter’s” upbeat melody and lyrics don’t appear to reflect the existential fear American Jews felt of Naziism, especially compared to the dire wartime works of Jewish artists like Ben Shahn and Arthur Szyk. Regardless of exactly how intensely he perceived the Nazi threat, Loeb made his stance clear by creating Rosie, who, for all her lighthearted appeal, is still out to crush the Axis.

After the War, Loeb continued to write songs, including, with co-writer Carmen Lombardo, the classic “Seems Like Old Times” in 1945, memorably revived by Diane Keaton in Woody Allen’s “Annie Hall.” As for Rosie, true to her hardworking roots, she never retired. Even today, her mention evokes a visceral emotional recall to an era when Americans were fighting to preserve freedoms and women were just beginning to carve out new roles for themselves in that struggle. Rockwell’s decision to name his painting after Loeb and Evans’ tough working girl is a testament both to the song and the vitality of its message: Freedoms can disappear without the support of women.