Q&A: Alan Brody on His Depiction of Jewish Women During WWII 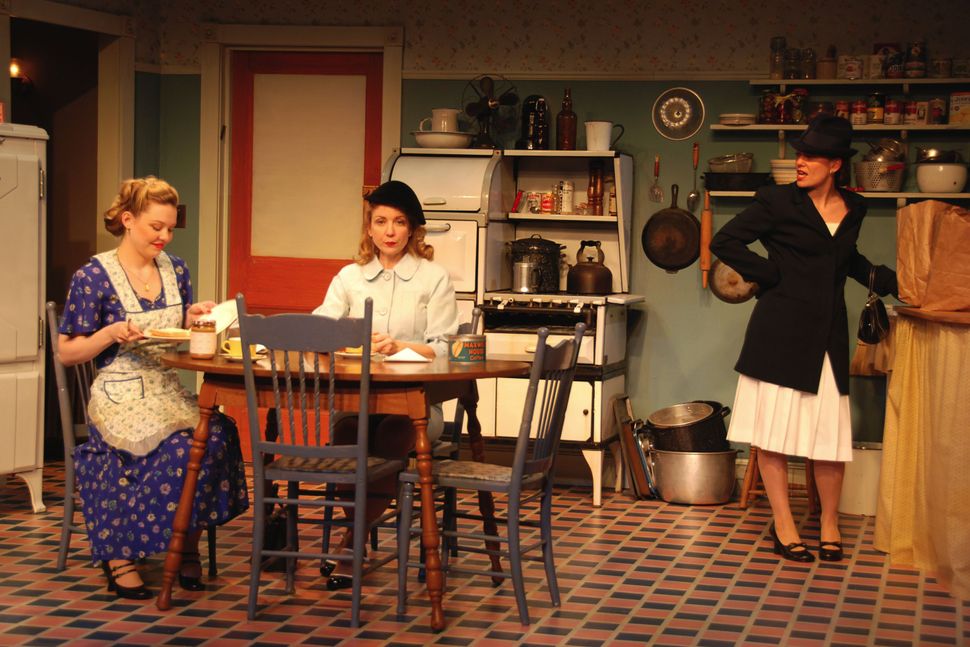 A scene from ?The Housewives of Mannheim.? Image by New Jersey Repertory Co.

In his new play, “The Housewives of Mannheim,” Alan Brody tells the story of four Jewish women living in a Brooklyn tenement during World War II. With their husbands gone to fight the war, the women begin to break out of their domestic shells and discover their inner lives are much more complicated than they had imagined.

Elissa Strauss: The entire play takes place inside a Jewish women’s kitchen. Why did you chose this setting?

Alan Brody: “The Housewives of Mannheim” is a memory play. I grew up in an apartment house in Flatbush that was very much like the extended community these women live in. The kitchen, of course, was the center of that community. I find that the memory of childhood places is a rich source for the imagination. As a kid, I believed that everything of significance happened in the kitchen. Will I knew there were things happening in other places, too, but I wasn’t allowed there. As a 10-year-old, I believed that my mother and all her friends were most fully themselves in the kitchen — not just because it was a place of nurture but it because it was social place, too.

The characters in the play use the relative freedom bestowed upon them by their husbands’ absence in order to explore their own desires and needs. How was this a period of change for American Jewish women — and for American women in general?

I think it was complicated time, especially for Jewish women because of what we all were learning about what was happening in Europe and their sense of identification with their sisters and their families there. But for all American women, it was a time of shifting consciousness. It’s generally talked about in terms of “Rosie the Riveter” and all the discoveries about independence she represented. But there was a deeper and richer level about the way women identified themselves that happened. During the early part of the Second Wave of feminism, in the late sixties and early seventies, I team-taught a course, called “Images of Women in American Film” with a feminist critic. Our students were the children of the women I write about in “The Housewives of Mannheim.” In revisiting the films that starred Bette Davis, Joan Crawford, Marlene Dietrich, Barbara Stanwyck, Carol Lombard, etc., I discovered that, no matter how the film ended — usually with marriage or reconciliation — the spirit of those movies resided in the images of financially independent women of strength and control over their own bodies. My students were the children of these women and were playing out the suppressed desires that had caught the imagination of their mothers. This was in 1971 and that revelation has stayed with me — and informs the play.

Growing up in Brooklyn, did you know women like the characters in the play?

The characters in “The Housewives of Mannheim” are all based on women I knew — and felt great affection for — when I was a child. I had been trying to find the vehicle for realizing them for a long time.

This play is part of a trilogy. What comes next for these characters?

The next play, “Victory Blues,” deals with what happens when the men come home. The third play, “Are You Popular,” deals with their children in their early teens in high school and the effects of the flight to the suburbs when they are displaced from the world they knew in the city. As I worked on the trilogy, I realized that I was writing something of a cultural history of America from a Jewish-American perspective. I hope I treat all of them with the deep affection and sense of humor I felt for them.

Q&A: Alan Brody on His Depiction of Jewish Women During WWII