A 92-Year-Old Holocaust Survivor Was Haunted By Hitler. So He Started Dressing Up As Him. 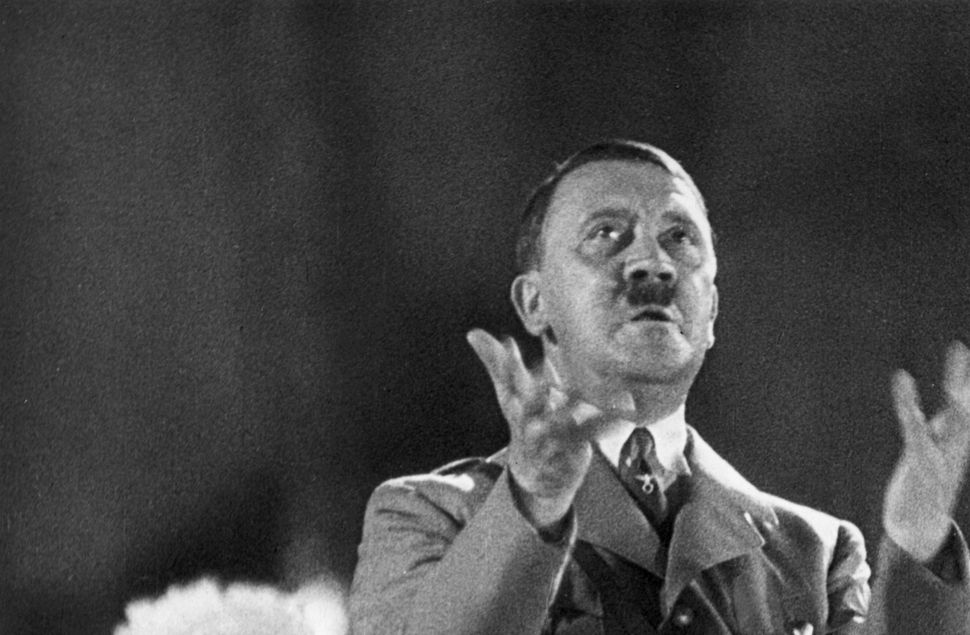 There is no one way to grieve or process a tragedy of an unimaginable scale. Still, few displays of grief are as curious as that favored by the 92-year-old Israeli artist Dov Or-Ner, a Holocaust survivor who appears in public dressed as Adolf Hitler.

Or-Ner, a veteran sculptor and painter whose parents died in the Holocaust, began using the Führer in his work as early as 2006. That year he displayed a series of paintings of Hitler at a Tel Aviv art gallery in a show called “My friend Hitler.” The exhibit was controversial, Israel’s YNet News reports, and the police showed up to shut it down. In the end, the artist and the authorities sorted it out and the show continued. But Or-Ner’s obsession with his subject only grew.

A short time after the exhibit, Or-Ner developed an alter ego, Bud Ranrua — an anagram of his Hebrew name — who presents as a happy doppelganger of Hitler, complete with painted-on black hair and a toothbrush mustache. (Less in keeping with Hitler’s aesthetic is the black-and-white robe depicting abstract human figures, and cinched at the neck with a brooch that looks like a huge human tooth, that Or-Ner wears as the character.) At first the character was limited to his creator’s outings in the world. Or-Ner would go to a Tel Aviv bus terminal, or walk around his kibbutz, where he wouldn’t be bothered or even recognized.

“There are no violent reactions,” Or-Ner told YNet. “Normally people talk to me and ask me why I’m doing this thing, and what does it mean.”

Or-Ner isn’t quite sure of what his answer to that question might be. “Even I don’t really know how to explain it,” Or-Ner said. “It’s a character that lives with me, and we get along mostly. When I’m in this character I feel good, 50 years younger.”

In December of last year the artist Gil Yefman raised Bud Ranrua’s profile, including Or-Ner’s character in his exhibit “Kibbutz Buchenwald” at the Tel Aviv Museum of Modern Art. Yefman named the exhibit for a real kibbutz established by Buchenwald survivors in 1949 and since renamed Netzer Sereni. A central part of the show is a video showing Or-Ner dressed up like Ranrua, accompanied by Yefman, who adopts his own persona — that of a Black woman named Penelope. The duo pose for pictures in front of images of the Buchenwald concentration camps, and Ranrua drops a seed into a pile of rubble, where it sprouts into a large tree. The pair previously worked together in these characters in their 2016 video project “Third Dress,” filmed at Kibbutz Yad Mordechai.

Or-Ner’s contribution to the collaboration is rooted in an early memory. The artist told YNet that his first recollection of Hitler comes from 1939, when as a 12-year-old he heard a radio broadcast of the dictator in his home in Paris. “It sounded like the barking of a wounded dog,” Or-Ner recalled to YNet. “This voice remained within me for years. It really bothered me, physically.”

Soon Hitler’s reign of terror forced Or-Ner and his parents to retreat to a remote village, after which his parents were deported to a death camp. Or-Ner lived out the war in the streets and returned to Paris after the end of the hostilities, staying at a home for orphans and eventually making Aliyah in 1953. Hitler’s barking was muted for some time, but about 15 years ago it returned. This time the voice encouraged his late career art.

“I simply purged Hitler from myself,” Or-Ner told YNet.

A 92-Year-Old Holocaust Survivor Was Haunted By Hitler. So He Started Dressing Up As Him.