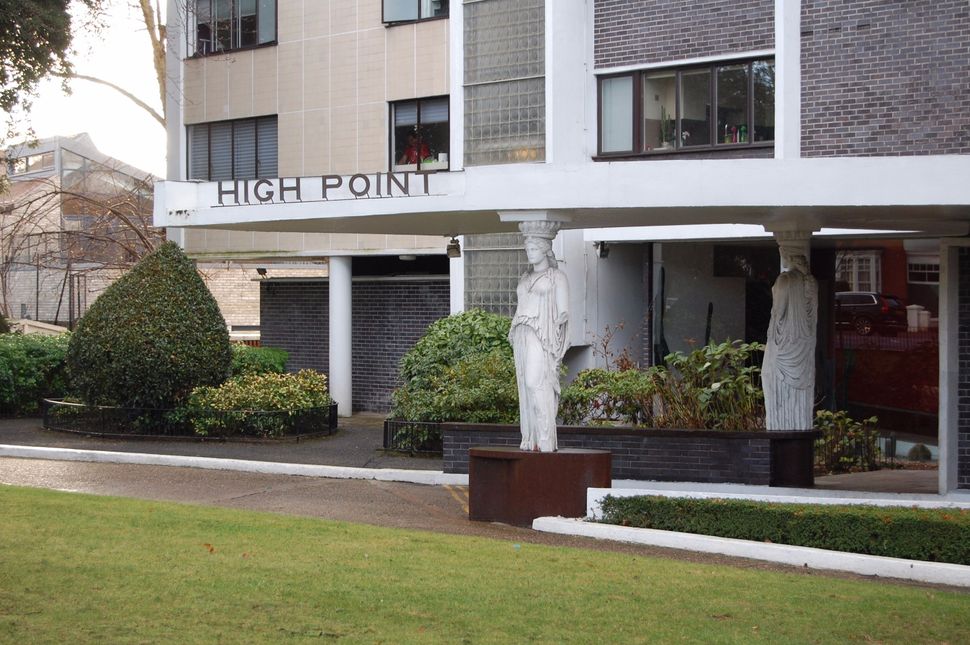 The entryway of Highpoint II uses caryatids in its design.

On the face of it, there’s not much that’s Jewish about Highpoint II.

The pre-World War II apartment complex, located in the Highgate suburb of London, is a sequel of sorts to architect Berthold Lubetkin’s groundbreaking Highpoint I from 1935. The first building was the apogee of modernist architecture with its white concrete, flat roof, geometrical design and interconnected windows leading out to rectangular balconies. Highpoint II, completed by Lubetkin in 1938, largely looks of a piece with its predecessor six feet away.

But Bronx Community College’s Professor Deborah Lewittes, author of “Berthold Lubetkin’s Highpoint II and the Jewish Contribution to Modern English Architecture,” believes Highpoint II is in fact a “hinge” between Lubetkin’s emblematic international style and his later dynamic facades. One major departure from his earlier development is immediately apparent: At the building’s entrance, residents and visitors are confronted with caryatids, female figures in traditional robes that take the place of columns.

Caryatids are a fixture of Greek architecture, and were anathema in 1930s modern architecture, a school that eschewed classical influences. What would drive Lubetkin, a Russian Jewish modernist émigré who began his career in Paris and established himself in London, to make such a choice? The Caryatids were copied from the British Museum, as SUM, a City University of New York affiliated site, reports, and Lubetkin often pointed to his British experience in explaining the inspiration for them. However, Lewittes’ book suggests his reasons for implementing them goes deeper. Much as the be-robed figures assume the function of conventional columns, their use at Highpoint II stands in for a painful history of Europe leading up to World War II – a history Lubetkin never discussed, even with his children.

Lubetkin was born in 1901 and arrived in London in 1931 by way of Paris, where he worked in the atelier of architect Jean Ginsberg. With his design of the Highpoint buildings, the Penguin Pool in Regent’s Park Zoo and the Finsbury Health Centre, Lubetkin helped to establish an architectural style that would inform the English avant garde in the late ‘40s and early ‘50s. Unique among his peers were his political ideas.

“He brought radical socialist theories to England (from his background in Russia), and he was a prolific writer,” Lewittes told the Forward. “[Writing] unto itself was not unusual, but he was blunt and critical, even of his colleagues.”

One thing he was never forthcoming about was his faith. Lubetkin kept his Jewish heritage a secret his entire life, wary of English society’s prejudice. His associates may have known, but it was never discussed.

“England was a safe haven for refugees from Nazi Germany, but at the same time, England was profoundly anti-Semitic and xenophobic, and Lubetkin worked within that conflicting world,” Lewittes said.

In England Lubetkin was protected from the Holocaust, but not from its impact. Lewittes believed he was well aware of what was taking shape in mainland Europe in the ‘30s.

“For him, ‘being quiet’ about his Jewishness was not hard, but at the same time, it was a society that was profoundly against who he was; foreigners were being sent to internment camps left and right, and he knew what was happening back on the continent,” Lewittes said.

Lubetkin’s parents would die at Auschwitz and next to nothing of their life remained when fog of war lifted. But Lubetkin’s daughter, Louise Kehoe, discovered the truth of her father’s history after his passing. She wrote in her memoir about finding a photograph of her grandparents’ bombed home in Warsaw taken by Lubetkin after the war. In the wreckage were destroyed caryatids.

But Lewittes doesn’t interpret Highpoint II’s caryatids as being solely motivated by Lubetkin’s nostalgia. For her, these out-of-place Greek ornaments are an assertion of something more profound, but no less autobiographical.

“I don’t see the caryatids as a return to historical architecture per se, but as a vocal response to the demand to be quiet, both as a Jew and as a modernist, in a society that hated both,” she said.