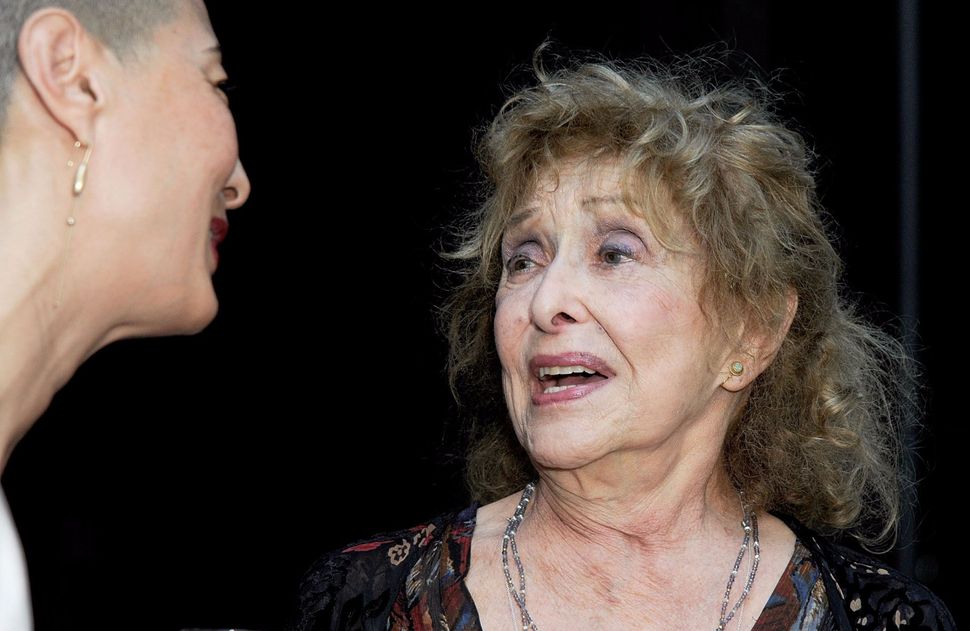 Carolee Schneemann, a boundary-shattering visual, film and performance artist has died at the age of 79; her often messy, always provocative mark on the culture survives in figures as diverse as Marina Abramović, Lena Dunham and Lady Gaga.

ArtNews reported Schneemann’s passing, confirmed to them by a New York representative and her dealer P.P.O.W. Gallery. In her 60-year-career, Schneemann produced a range of art that confronted taboos and embraced body-positivity well before that term entered common usage. Her famous 1964 film, “Meat Joy,” described by Schneemann as a “ritual for my starved culture,” showed eight dancers in their underwear, rolling together over a mess of sausages, mackerel and blood.

But it was the use of her own body as subject and canvas that produced her most daring work. In 1973 she first performed “Up to and Including Her Limits,” in which she hung naked from a tree surgeon’s harness and struggled to mark the nearby walls with crayon. The vulnerable display has been read as a commentary on the difficulty faced by women in making their mark in the art world. Even those who have never heard Schneemann’s name may recognize something of the performance from the harnessed acrobatics of Maude in “The Big Lebowski” (the Coens said the artist informed the character).

Born in 1939 in Fox Chase, Pennsylvania to a doctor father and homemaker mother, Schneemann pursued art in defiance of her parents’ and instructors’ wishes. Schneemann recalled to the artist Pipilotti Rist in a 2017 interview that her teachers at Bard College told her, “You’re very talented, but don’t set your heart on art. You’re only a girl.”

Despite these doubts and her suspension for nude self-portraits, Schneemann got her diploma from Bard. She went on to earn her MFA from the University of Illinois Urbana-Champaign alongside her then-partner composer James Tenney, with whom she made on the 1967 film “Fuses” which showed them having sex.

The couple moved to New York after finishing their studies and there Schneemann helped found the influential Judson Dance Theater at Judson Church, where she would go on to film “Meat Joy” and other projects.

Not everyone was receptive to Schneemann’s work, with feminist critics often labeling her a narcissist. She responded creatively to a filmmaker critical of her work in 1975’s “Interior Scroll” in which she removed a long, thin document from her vagina and read its text – including a harsh response to the filmmaker – aloud.

As a young woman in a man’s art world, and what’s more one inclined to extreme displays, Schneemann recalled being rejected by a “every gallery” she submitted to in the ‘60s and late ‘70s.

But later years saw her star rise with a 1996 survey at the New Museum in New York. In the new millennium, Europe was host to a full retrospective of her work at the Museum der Moderne Salzburg in Austria that premiered in 2015 before a New York homecoming at MoMA PS1 in 2017. That same year, Schneemann was awarded the Golden Lion for Lifetime Achievement from the Venice Biennale exhibition in Italy.

The name of Schneemann’s 2015 retrospective, “Kinetic Painting” points to her dynamism as an artist, and while most remember her more for her daring films and displays of public nudity than for painting, Schneemann, never one to buckle to the critics, had other ideas.

“I’m a painter,” Schneemann said in 1993. “I’m still a painter and I will die a painter. Everything that I have developed has to do with extending visual principles off the canvas.”