Haunted by ‘monsters,’ a Jewish artist sees the Dark Ages in modern times 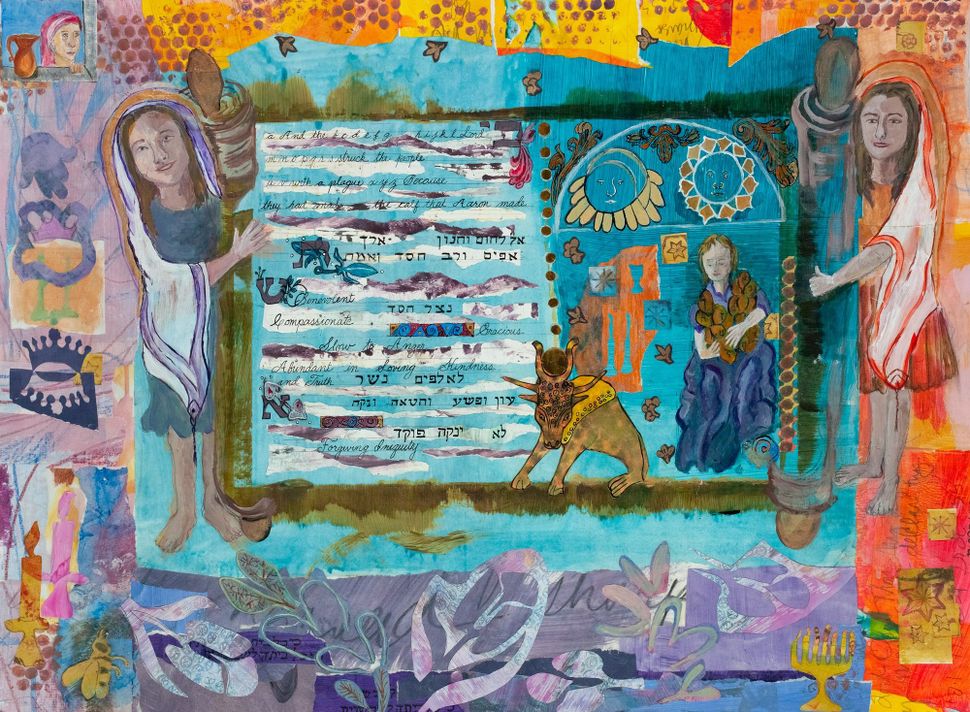 Ki Tisa: Kassap’s painting shows twin sisters becoming B’Nai Mitzva on the Shabbat following Purim in which the Torah portion Ki Tisa is read. While there is joy in the piece, there a sense of looming danger, as symbolized in the lung-shaped flowers that surround the Torah scroll. By Karen Kassap

Even as Karen Kassap cocooned with her family while the world shut down last March, the world insisted on intruding — the pandemic, racial strife, politics.

And so, with no particular project in mind, the multimedia collage artist began snipping, gluing, and painting her way through her feelings. Slowly, a canvas depicting two ruby-red monsters against an emerald green emerged. “Medieval Monsters,” one of several works in her Pandemic Series, explored her personal response to what she described as the chaos of the world outside, from a deadly respiratory virus to the Black Lives Matter protests.

“The pieces started out as almost journal entries,” Kassap said, sitting in her Connecticut studio, the sun already casting long shadows in the waning light. “There was just so much happening in the world. It was so overwhelming and deeply emotional. It was because of the outside world that we had to be locked away and I started wondering how I could represent that through my work.” 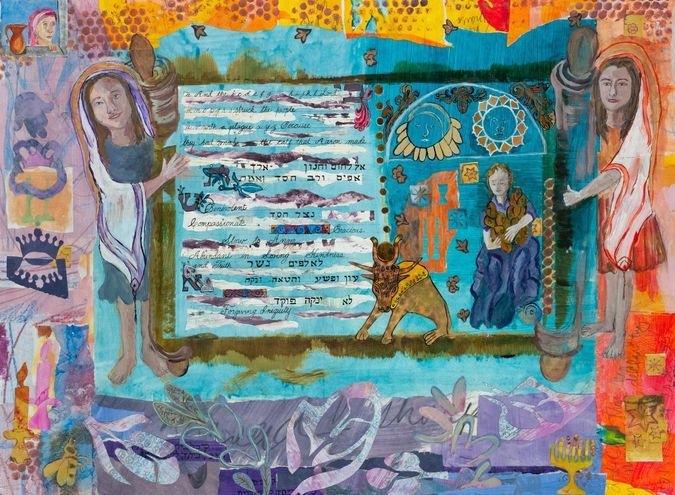 Ki Tisa: Kassap’s painting shows twin sisters becoming B’Nai Mitzva on the Shabbat following Purim in which the Torah portion Ki Tisa is read. While there is joy in the piece, there a sense of looming danger, as symbolized in the lung-shaped flowers that surround the Torah scroll. By Karen Kassap

The works in “Karen Kassap: Medieval Modern,” now on display at Koslowe Gallery in Westchester Jewish Center, reflect Kassap’s identity as an observant Jewish woman and ask the question: “What good is an omen if you can only see its meaning by looking back?”

“Ki Tisa,” based on the last Shabbat service Kassap attended before the onset of the 2020 quarantine, shows twin sisters becoming B’Nai Mitzva on the Shabbat following Purim in which the Torah portion Ki Tisa is read. While there is joy, there is also a sense of looming danger, as seen in the lung-shaped flowers that surround the Torah scroll.

“Usually we notice if something bad happens. And we think, if only we had recognized it at the time. But usually we don’t realize what we were seeing until we look back,” she said. “COVID started during Purim, a holiday of masks. Then, suddenly, everyone had to mask up. And we had a president who couldn’t be a good leader. Omens!”

Aside from the masks, there was the daily counting of the dead, the sick and the positive case rates, Kassap said. Additionally, although antisemitism was already on the rise before, it seemed to worsen during the pandemic.

“The way Jews were blamed for COVID-19 just as they were for plague,” she said. “I kept thinking of medieval times, of people not understanding science then and the way people weren’t trusting it now. Yes, there are things about the virus that maybe we didn’t understand at the beginning, it’s a new disease. But we know about microbes and vaccination and diseases, so it was confusing to me that people didn’t — and don’t — trust science. It felt like we were going back to the Dark Ages.” 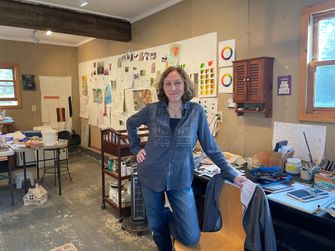 Evolution: While she studied black and white photography at the International Center for Photography. Karen Kassap found herself gravitating to collage. By Cathryn J. Prince

When she’s not working in her studio, Kassap, who is an attorney, also volunteers for the Apostle Immigrant Services and works as a facilitator for the ADL Words to Action program.

She grew up in a creative home. Her mother painted and drew. Her father, an engineer, favored weaving and pottery. While she studied black and white photography at the International Center for Photography she found herself gravitating to collage.

“I love the idea of cutting apart sources of already created images and then putting together in a different way to draw the viewer in. That’s what I like about collage, the idea that the more you look the more you see,” she said.

Her studio is like that. The more you look the more one see.

Nestled between jars of paint brushes and pens, is a jar of bleached white seashells. A tray of odds and ends vies for space among stacks of papers and post cards. Photographs are pinned to the wall next to color swatches. An unpainted pitcher with a floral motif sits on a pottery wheel. 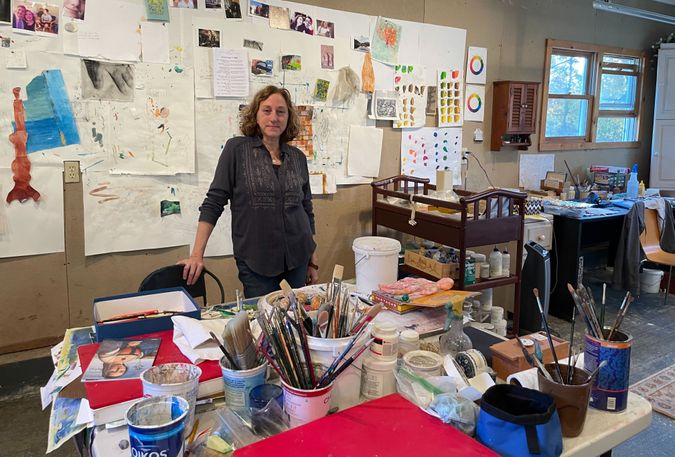 In Her Studio: Karen Kassap, who also works as an attorney, in her Connecticut workspace. By Cathryn J. Prince

On an easel rests a nearly-finished portrait of her husband, Cary Caldwell. In a nod to Renaissance and Medieval portrait artists who incorporated icons to suggest one’s profession and interests, Kassap painted three birds in the corner to signify their three children as well as Caldwell’s interest in music. A stack of books topped with a globe represents his concern for the world outside his own as well as his scholarship and a caduceus on his watch shows he’s a physician.

“I had thought about using a skull as a symbol of the medical sciences and a memento mori, but he is a hopeful person as well as a healer,” she said.

In “Black Wedding” a bride and groom stand together under a black marriage canopy. Only instead of a medieval city in the distance, this union takes place during COVID-19. It is a symbol for both the pandemic and for marriage.

Sometimes called a cholera wedding or a plague wedding, a Black Wedding is an Eastern European superstition. The marriage usually took place between two marginalized people in the presence of the dead. The community would sponsor the wedding as an offering of sorts, a way to help bring God’s attention to the suffering from the plague. 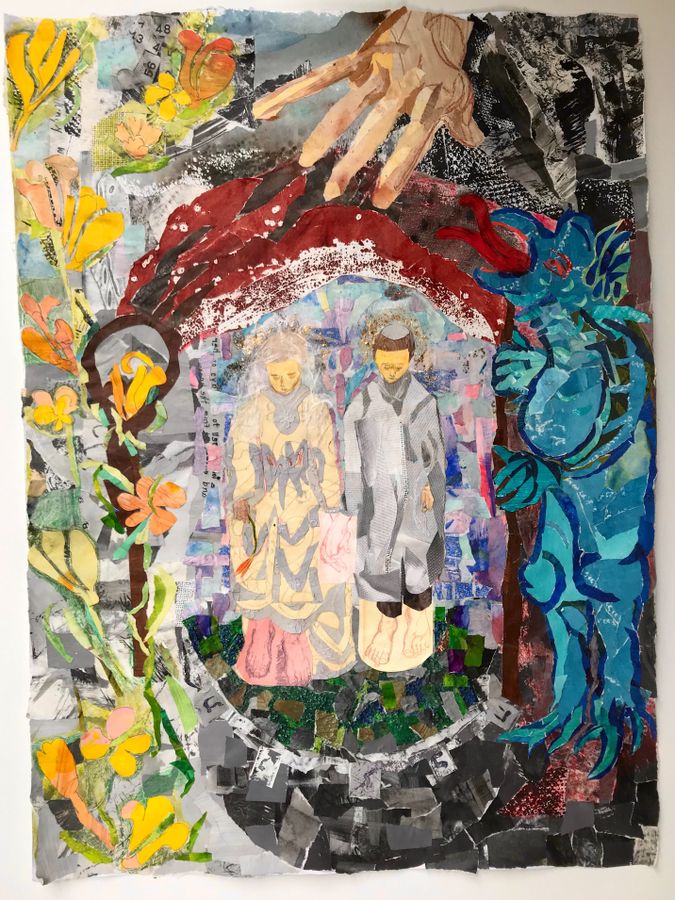 Black Wedding: In this painting, a bride and groom stand together under a black marriage canopy. Only instead of a medieval city in the distance, this union takes place during COVID-19. It is both a metaphor for the pandemic and for marriage. By Karen Kassap

While most Black Weddings occurred centuries ago, one did occur in the U.S. during the 1918 flu pandemic and most recently in Jerusalem during COVID.

“This was an old Jewish superstition, but during COVID I found a bigger question in the idea of it. Is marriage a blessing or is it a curse? Can you make the world a better place?” Kassap said. “It spoke to the feminist in me — the idea of taking on the burden of the world through marriage. The idea of marriage being a leap of faith.”

Karen Kassap’s work is on display through mid-January at the Koslower Gallery in Westchester.

Haunted by ‘monsters,’ a Jewish artist sees the Dark Ages in modern times