3 Brothers Survived The Holocaust In A Cave. Can They Survive Revisiting It? 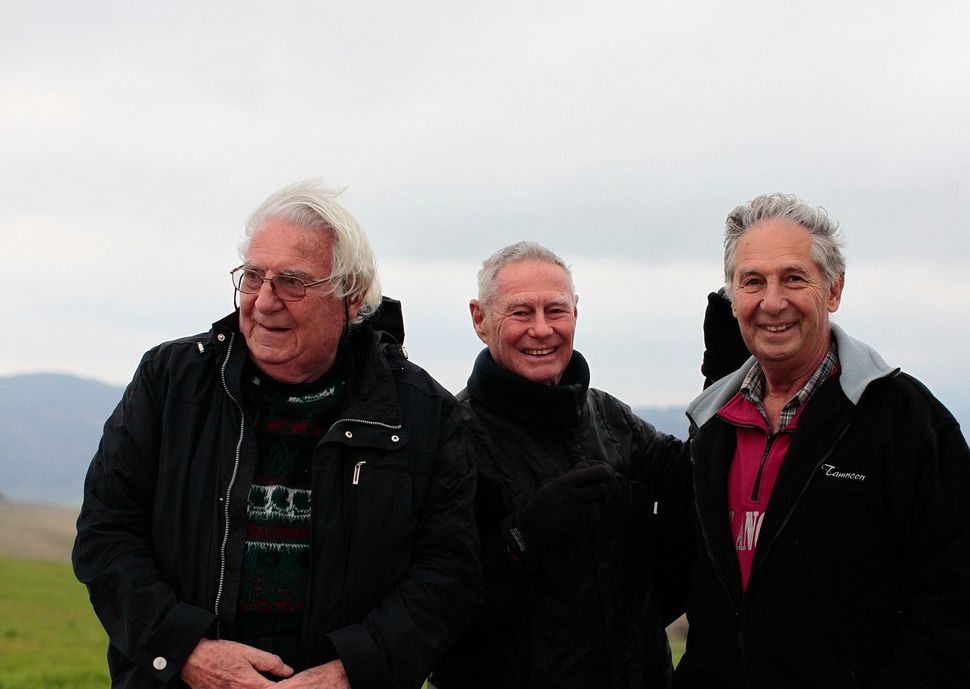 “Shalom Italia” is not your typical Holocaust movie. The documentary, which airs July 24 as part of the POV series on PBS, is as much a fascinating family drama and rumination on memory as it is about surviving the war.

Emmanuel, Andrea, and Bubi Anati, brothers born to an extended, respected and prosperous family in Florence, were forced to abandon their home during the second World War. At first, they fled to a summer house in Campoli, but soon had to leave that, as well. They ended up spending several years living in a cave in the Tuscan hills.

After the war, the trio moved to Israel. Decades passed, and eventually the youngest brother, Bubi, decided the brothers should return to Italy to find the cave.

Director Tamar Tal Anati, who won an Israeli Academy Award for “Life in Stills,” heard about the trip during a family dinner – she’s Bubi’s daughter-in-law – and immediately “knew that was going to be my next film.”

In a FaceTime interview from Tel Aviv, Anati added, the pronouncement seemed a surprise to everyone at the table, because as with many survivors, the brothers didn’t talk about their wartime experiences.

The dynamic between the brothers is as engrossing as their quest. Emmanuel, 84, the oldest, is a world-famous archeologist and a world-class curmudgeon. His reaction to the journey: It was “six years of misery. Why search for it? I don’t want to remember.”

Andrea, 82, who holds a Ph.D in physics, is the complete opposite: Always cheerful, whistling classical music while he plays air flute or air violin and adopts ballet poses. His memories of the cave, unlike Emmanuel’s, are positive.

“Sure, why not [go]? Those were wonderful times,” he recalls in the film. “We lived in the woods, played Robin Hood and collected mushrooms. We were all together. I had fun in the Holocaust.”

Bubi’s outlook lies somewhere between those of his brothers. A decade younger than Emmanuel, he takes on the role of the pesky little brother who pushes everyone forward. He now lives half the year in Italy and is busy converting the drafty old building the brothers use as the home base for their quest to a bed and breakfast.

During their search, the brothers get lost, enjoy sumptuous feasts, celebrate a Shabbas meal, and visit the ornate Florence synagogue. But it becomes obvious they have no idea where the cave might be. And that’s not all they’ve forgotten.

Bubi tells the group he’d recently run into a woman who remembered him from the war years. She claimed her family had hidden the Anati family valuables, periodically pawned some, and used the money to purchase food for the Anatis. None of the brothers remember this, and Emmanuel is skeptical. “It sounds like she made it up. We had no jewelry.”

Of course, they find the woman and the memories start to flood back. After several false starts, they also eventually find the cave. It is a touching discovery, prompting Emmanuel to say:

“Now, after 70 years, I have the courage to remember again. I’ve simply erased this terrible memory from my mind.”

Bubi recalls how, fearing discovery, the boys were required to stay silent throughout the war. Now, he screams, “I can yell and if the Germans hear they can kiss my a**.”

The film is interesting, captivating and heartwarming. But it leaves too many questions unanswered.

There’s no indication in the film, for instance, of what the family‘s life was like in pre-war Italy, although judging by their residences in Florence and Campoli, the Antonis must have been wealthy. Director Anati told me the boys’ father ran an architectural firm and the family was “very well established in Florence.”

“They also held high-ranking positions in the army and were very involved in Florence society,” she added.

But what happened to their various properties? Were they were able to reclaim them after the war? The film never answers either question.

Similarly, how did the brothers get to Israel and achieve success? Did they have families? Emmanuel is shown early on walking down a beach with a woman. His wife? An assistant? Andrea says his wife died as the result of a mugging in her 70s. Did any of the brothers have children?

At film’s end, Bubi, accompanied by a group of people is back at the cave putting up a plaque describing the site and thanking local residents who helped them survive. The people surrounding him are unidentified, but one youngster in the scene calls him “Grandpa.” That’s followed by a scene, presumably back in Israel, of a large Seder. Again, the participants are unidentified. Family? Friends? I wish I’d met them earlier and heard their take on the trip.

You can make a good documentary leaving some questions unanswered. You just can’t make a great one.

3 Brothers Survived The Holocaust In A Cave. Can They Survive Revisiting It?