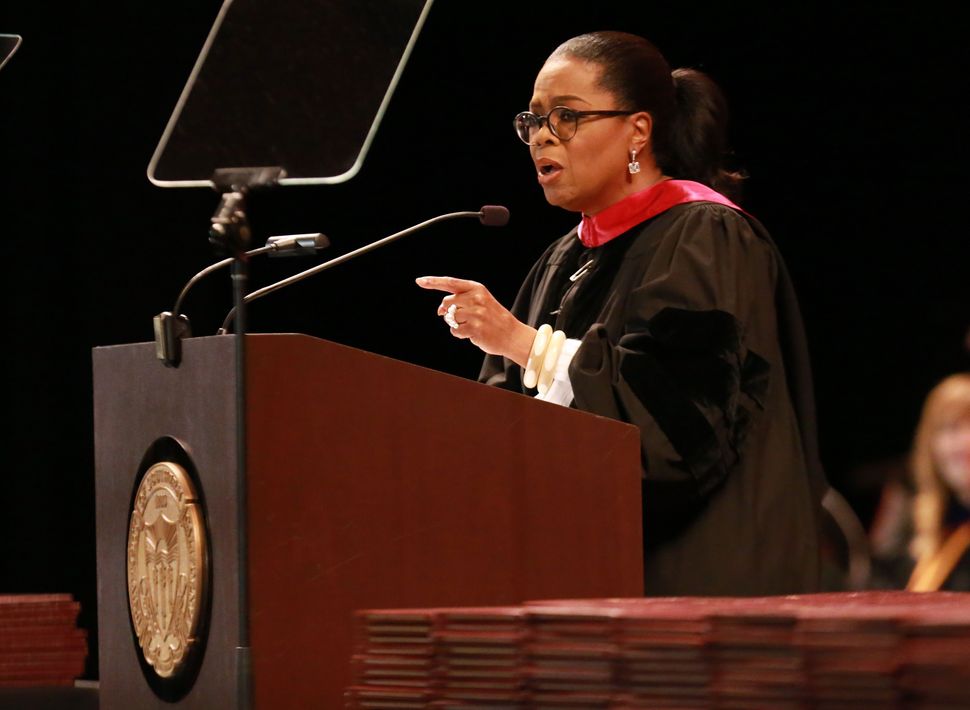 Oprah gave a pitch-perfect commencement speech at my school’s graduation, a mix of motivation (“Be the truth. Be. The. Truth.”) and motivation shtick (“Invest in a quality mattress. And don’t cheap out on your shoes.”). The exhortation that won the biggest rise from the thousand USC Annenberg students: “Vote. Vote. Vote.” Their cheers almost made me forget that most of them probably won’t.

California — which provides most of the students for The University of Southern California — is closing in on 20 million registered voters. That’s a record number for the state, and an impressive three-quarters of its voting-age population. But as many as two-thirds of California’s registered voters – more than 13 million people — won’t vote in the June 5 primaries.

Nationwide, 40 million Americans who voted in the 2016 presidential election won’t be voting in the 2018 midterm election. Some voters may (wrongly) feel that off-year primaries are too parochial or lackluster to care about, but that’s a voter chunk the size of the entire population of Canada deciding not to vote in races that will determine the nation’s course for the next two years. Especially dispiriting is the millennial demographic. Of Americans aged 18 to 29, only 37% say that they’re definitely going to vote in November.

Clearly Oprah’s got her work cut out for her.

She used two arguments to persuade her audience — the whole country, really — to vote, vote, vote.

One is moral: Good citizens vote. It’s our duty. “People died for that right,” she told the students. “I think about that every time I cast a vote. So don’t let their sacrifice be in vain.”

The other is instrumental: Voting makes office-holders accountable. It throws the bums out. “Pay attention to what the people who claim to represent you are doing and saying in your name,” she said, “and if they’ve not done right by you, if their policies are at odds with your core beliefs, then you have a responsibility to send them packing. If they go low (thank you, Michelle Obama), … we go to the polls.” The students loved that.

They’re good arguments. I’ve been hearing and making them since high school. I don’t want to get on Oprah’s bad side, but it doesn’t look like they’ve been working.

Since Jimmy Carter was elected in 1976, the highest voting-age turnout was only 58%, when Barack Obama won in 2008. At America’s best, then, nearly 82 million eligible voters didn’t vote — the population of Germany.

We say that Reagan’s 1984 victory was a landslide, but he won just 31.3% of the voting-age population. With seven out of 10 voting-age Americans not voting for him, what kind of mandate is that? Our turnout sucks by international standards, too: Compared to recent nationwide elections in 35 developed democracies — the OECD member nations — U.S. turnout in 2016 ranked 28 — just below Estonia.

So why aren’t more Americans voting?

To start with, some people want to vote, but can’t. In additition to mischief like misdirection and bullying, some states have instituted deliberate voter suppression strategies. Purporting to protect elections from pretend voter fraud, partisan majorities in a number of states have reduced turnout by making it harder for political, racial and demographic minorities to register and to vote.

Gerrymandering has also maximized the power of some voters and minimized the impact of others by creating, for example, large party majorities in two neighboring districts rather than two marginal seats. And though the origin of the Electoral College isn’t partisan, its effect is: Low-population red states select more electors per voter than high-population blue states. But even if those inequities were taken off the table, I wonder whether we’d get Swedish- (82.6%) or Israeli- (72.3%) sized turnout.

Americans agree in principle with the moral argument for voting: Asked what actions are very important to take to be a good citizen, more people picked voting in elections than anything else. But I think that answer needs to be discounted by Americans’ trust in government, which has sunk to historic lows. It fell off a cliff during Vietnam and Watergate, and it hasn’t broken 20% for the last five years.

You can’t blame Americans for being turned off by electoral politics. Campaigns sleaze makes us want to take a shower. That’s what it’s designed to do: nauseate your opponent’s voters into staying home. Our perverse campaign finance system, unique among democracies, is an open sewer. Campaign coverage has been weaponized. The business model of news media and social media – capturing and monetizing our attention – has hooked us on melodrama, addicted us to outrage and made us sitting ducks for propaganda and disinformation, both domestic and foreign, whose prime purpose is to suppress turnout. No wonder we want to flee the info-tainment freak show.

If people believed that voting could clean the stables, they’d swarm to the polls. But there’s a bumper sticker about the paradox of trying that: “Don’t vote – it only encourages them.” Less than a third of millennials “think that running for office is an honorable thing to do,” the Economist points out, citing a Harvard study, “while two-thirds think that politicians mostly go into public service for selfish reasons.” Vote them out, Oprah says. But does it really matter who represents you, if the place you send the new ones is the same cesspool that fouled the ones you sent packing?

Americans may have given up on the circus, but we haven’t given up on one another. A study by the Google Civic Innovation Team details Americans’ “complicated relationship with civic duty” — and it’s more complicated than voting or not. De Tocqueville marveled at “the associations that are formed in civil life and which have an object that is in no way political” by “Americans of all ages, all, conditions, all minds.” Nearly two centuries later, Google mapped a broad “ecosystem of institutions and individuals working hard to make our civic life more inclusive and meaningful.”

We volunteer, we raise money for causes, we sign petitions, we attend community meetings, we work on neighborhood problems, we feel that we matter – but “politics” is not the name we give that.

When I vote, I have no illusions about the consequence of my voting. There is zero chance that my vote will change the outcome of the election. Yeah, I know: “If everyone felt that way….” But there is also zero chance that anything I say or do will change how anyone else feels, let alone how everyone else feels, about whether to vote or who to vote for. Nevertheless, I will vote in June, and in November, and in as many more elections as my future will allow.

So will a staggering percentage of other Jews. Though we make up only between 2% and 4% of the total presidential vote, Jews have the highest voter turnout of any ethnic group. Eighty-four percent of Jews say they vote always or nearly always. In 2008, 96% of Jews voted, some 30 points higher than black turnout.

What accounts for it? Age, income and education may play a role; so might experience or memory of anti-democratic and anti-Semitic regimes, and the obligation to be a good citizen-steward of social justice policy, and of the U.S. relationship with Israel. I see myself in all that, but for me there’s something else as well, a sort of Jewish version of Pascal’s wager.

A few years ago, on Yom Kippur afternoon, I led a seminar between the Mincha and Yizkor services, one of several offered at my Reform congregation, Temple Israel of Hollywood. My rabbi invited me to pick a topic. I chose this: “If I’m Not So Sure I Believe in God, What Am I Doing Here Today, Anyway?” A hundred people, maybe more, showed up, so it was more like a town hall than a study group. People came to hear how other people, and how they themselves, answered the question. The most common answer: “It makes no sense.” The second most common: “It’s the right thing to do.” The third: “You never know.” By the end, pretty much everyone was saying, “All of the above.”

That’s how I feel about voting. You never know. It doesn’t make sense. But even without making sense, it’s the right thing to do.

If democracy is America’s civil religion, maybe Election Day should be a holiday — a civic Holy Day, a day to do something you should, even if the reasons why you should are unreasonable or difficult to explain. Short of making voting compulsory (not such a radical idea), giving people the day off could turn out to be the most practical way to boost turnout.

Just before Oprah urged our Annenberg graduates to vote, she gave a nod to the presidential speculation her Golden Globes acceptance speech launched:

I hesitate to say this because the rumors from my last big speech have finally died down.

She couldn’t have been too worried, because she put it on her website. I’d be thrilled if Oprah runs for president. George Clooney, too. Plus someone I’ve never heard of, like the obscure state senator from Illinois who electrified the country with his keynote at the 2004 Democratic Convention. Whoever runs, whoever wins, I just want enough Americans to vote to make that victory, and our democracy, meaningful.