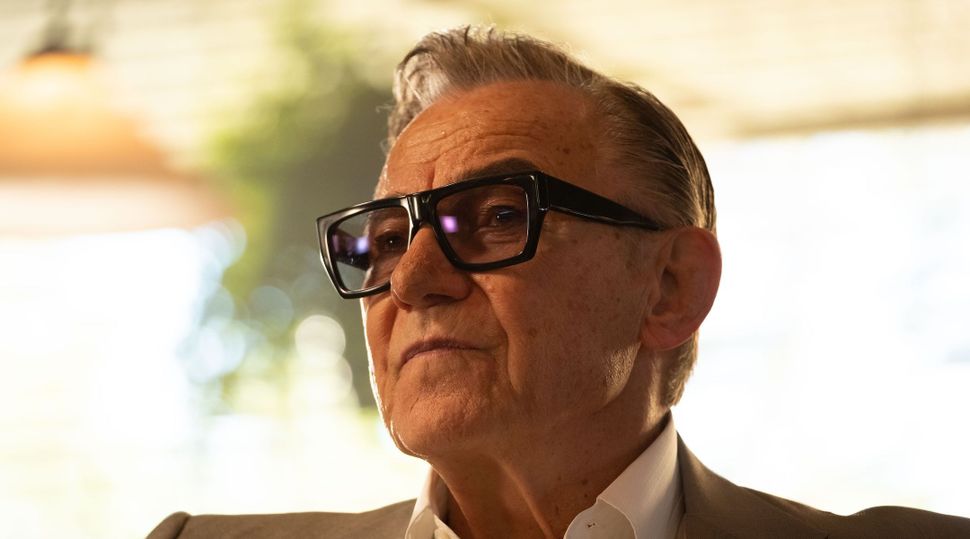 After ordering tongue sandwiches and “an assortment of pickles” at a Miami deli, the terminally ill Meyer Lansky asks his handpicked biographer why he wants to write his story.

When Lansky says he’s dodging the question, Stone admits the real reason: “I need the money.”

It would perhaps be cynical to reduce Harvey Keitel’s appearance in this hackneyed biopic of the famed “Mob’s Accountant” to that same need. For one thing, it seems unlikely that the payout was especially big. And Lansky, referred to in the film somewhat ludicrously as the “most notorious gangster in American history,” seems like a role Keitel has been waiting his whole life to play.

Keitel was trained by Lee Strasberg, who was nominated for an Oscar for playing a Lansky approximation in “The Godfather Part II,” and made his career playing a number of Italian heavies (and a few priests) while more ethnically-appropriate wise guy parts waited in the wings — and often went to his regular co-star, Robert De Niro. In a rare instance of playing Jewish, he was Mickey Cohen in “Bugsy,” opposite Ben Kingsley’s Lansky. It makes a certain belated sense that Keitel would jump at a chance to play the criminal mastermind in winter. It’s a shame that the writer-director, Eytan Rockaway, couldn’t make a film worthy of his star’s performance — or one that’s sufficiently interested in its subject.

If you don’t know about Meyer Lansky, prepare to be told — by Lansky at a deli; by FBI agents hounding him; by Lansky in a video interview applying for Israeli citizenship; and, most thuddingly, by his inconsistently-accented and entirely fictional biographer, Stone, played by Sam Worthington, who introduces Lansky’s criminal enterprises and associates through narration over flashback scenes that could, with no small effort, handle exposition themselves.

The flashbacks are actually about half of the film, with John Magaro playing the younger Lansky on sets that would be right at home in a History Channel reenactment. In these sequences, Lansky himself is fed information. Once, by an Army man who enlists his help by saying “as I’m sure you’re aware” Nazis are sneaking things through the docks. Later, an envoy from Golda Meir visits one of Lansky’s casinos to say “as you know, our people have been slaughtered in Germany.” (Don’t worry, he rolls up his sleeve to show his numbered tattoo as violins swell and Lansky makes everyone empty their pockets for the aspiring Jewish state, referred to anachronistically, pre-1948, by the name Israel.)

Rockaway, whose father Robert interviewed Lansky for a book on Jewish mobsters, seems quite interested in underlining the fact that Meyer Lansky was Jewish, and that his care for landsmen was frequently violent.

As a young bootlegger working with Lucky Luciano (introduced to the strains of “Funiculi Funicula”) and Bugsy Siegel, Lansky sends a message to a meeting of an unnamed Nazi group. There’s an eyeball-gouging as a Polish immigrant takes the stage, flanked by swastikas to say “I am Jew. You have something to say to me?”

Rockaway is not alone in wanting to stress Lansky’s Jewishness. A 1999 HBO biopic, scripted by David Mamet and starring Richard Dreyfuss, features many of the same beats, from Lansky’s brutal memories of the pogroms to his betting money for the family Shabbat challah on a dice game. Rockaway subtracts much of Lansky’s rise from the earlier film’s formula and adds little, save a montage of murders set to “Hava Nagila” (a lot of ethnomusicological cringe here) and fleeting glimpses of his home life. But every time there is a moment to linger on Lansky’s concern for his son Buddy, who had cerebral palsy, it’s undercut by a scene with Stone.

A quarter of the movie is given over to Stone, a person who never existed, and his dealings with the feds and a woman in his hotel (Minka Kelly, who swims and has an ex who was a drug dealer and no other distinguishing features). There’s some attempt at parallelism here, as Stone lets Lansky’s paternal platitudes tug at him as he weighs his obligations to his kids and his loyalty to his source. It doesn’t work on the level of a narrative device and Stone barely even works as a character.

Is there something to be salvaged from this maudlin mess of a film, which fails to unearth a complex man’s contradictions? Keitel, framed by thick tinted glasses and topped with a fedora, gives a solid performance. He has the gravitas to anchor the movie. But you sense he may not have had more than a couple of afternoons to finish the job.

Keitel deserves better, and, while there’s little to commend the guy for, Lansky does too.