Singing Across Israel for Women’s Dignity 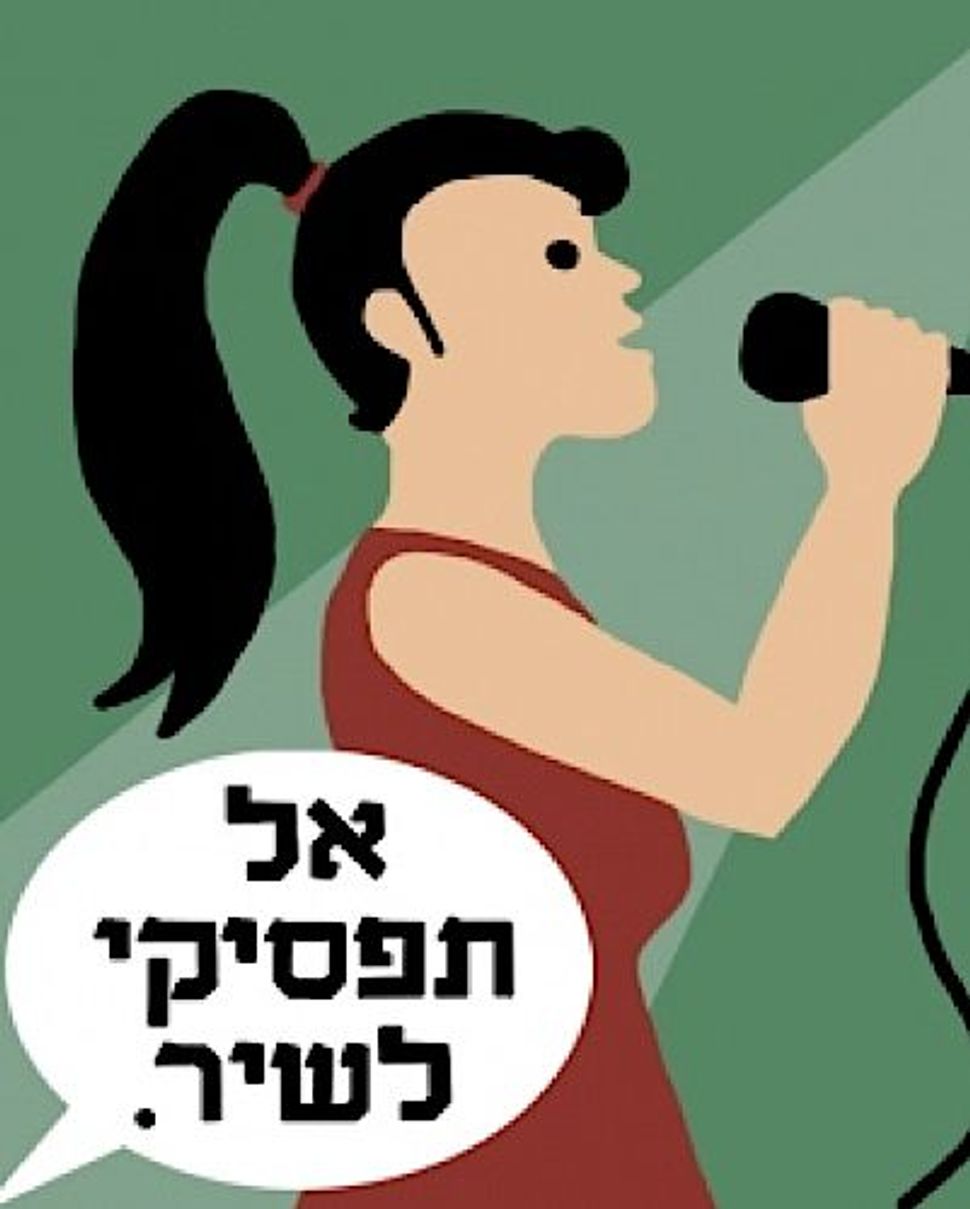 Good news — Israeli women are fighting back against those who would hide and silence them.

Recent developments for women in Israel have been worrisome and depressing, as readers of this blog are well aware. There has been increasing gender separation on buses and on public streets, harassment of young Beit Shemesh girls whose only crime is attending their school, trouble in the Israel Defense Forces with religious officers walking out of ceremonies in which women are singing, as well as the disappearance of women from Jerusalem billboards.

For Hila Bunyovich-Hoffman, a Tel Aviv woman who has a master’s degree in gender studies, works as a technical writer and blogs about women’s issues, it has all become too much. She decided that someone had to take action. On her Hebrew-language blog and on a Facebook event page she created, she announced a Tel Aviv street protest in which a group of women would stand in public and sing, to make their voices heard.

The tidal wave of response to her initiative has been “unexpected and overwhelming,” she told The Sisterhood in an interview.

Shortly after she announced the Tel Aviv event, scheduled for November 11, simultaneous protests in Jerusalem and in Haifa were organized, and a fourth event, in Beersheva, is now being put together.

What took her from merely blogging about gender issues to organizing a real-life protest? She said:

I have been writing about all of these issues for a long time; the frustration has been building in me. The whole subject of women’s singing was the last straw. I took singing and was in choirs most of my life. When someone says: ‘Shut up. You can’t sing, because you are a woman’ — that hits me on such a basic level, I had to do something about it.

Triggering her outrage in particular was the response of Israel’s chief rabbi to the controversy regarding women’s singing in IDF ceremonies, in which he recommended female singing be avoided to protect religious male sensibilities, citing the law which compares a women’s voice to “nakedness” or, as she points out — is more literally translated as sound that is “pubic.” In a long, impassioned post on her blog, translated here, Bunyovich-Hoffman declared:

The time has come to say it loud and clear: when people say that ‘a woman’s voice is pubic,’ they are likening a person to a sex organ. When people make a show of leaving the room when another person is singing, they are expressing disgust and rejection, as though the singer were leprous, unclean, not legitimate. When a man advocates for the singing of males only, he is disgracefully dehumanizing 51% of the population and saying that women are not human. He determines, in effect, that women are the sum of their sex organs, and denies us a basic form of self-expression. Worse yet, as an influential leader, courted by the greatest military generals wearing (temporary) religious attire, he directs others to think and act just as he does.

And that founding principle, where women can always and forever step aside, because their role is sidelined — is not acceptable to me.

She didn’t set out to create a mass protest. Originally, she said, “the idea was to take a few good friends and go somewhere with a guitar and sing in order to spread awareness, maybe do a flash mob or something along those lines.” But the media attention and tremendous flood of support to the event she created on Facebook quickly made it clear that this would be no small-scale protest. (As of this writing, more than 700 people on Facebook have confirmed their attendance.)

She compares the unexpected response to the social protest movement that swept Israel this past summer:

Daphne Leef was one woman who took a few friends and did something by pitching a tent in Tel Aviv, and it exploded. And now, in the U.S., there is Occupy Wall Street movement is gaining the same kind of momentum. It is like we have reached some kind of tipping point around the world: there is a critical mass of people who have just had it, it is a tidal wave of awareness. We woke up.

Bunyovich-Hoffman and her supporters are now busy putting together a songbook with appropriate tunes for the protests. She wrote in her blog that the underlying message of the event should be simple and clear, telling those who plan to participate:

If anyone asks you what that crazy event is that you’re attending, please remind them that the craziness is the current situation — not in protesting against it. We’re not going to stage a provocation, but rather to maintain sanity. We are here to remind people that granting consideration to people who want to humiliate and hurt others is insanity, and we will no longer permit it. We are here to remind everyone that women are people.

Singing Across Israel for Women’s Dignity