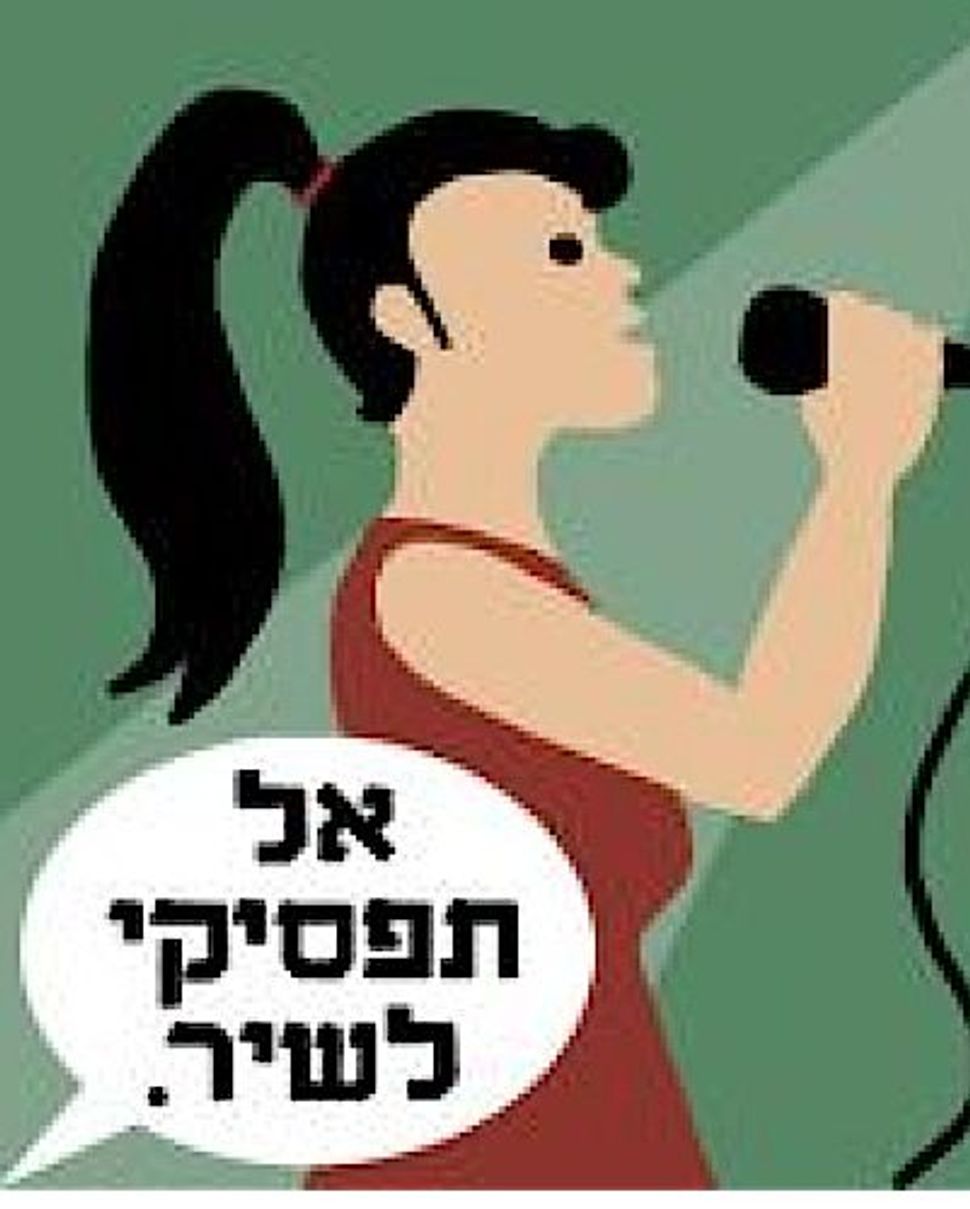 It was small, low-key and the participants numbered in the hundreds, not the thousands. But a crowd of Israeli women took to the streets to speak out — or, more accurately, sing out — against the continuing attacks by religious extremists on women’s right to be seen and heard freely in the public square.

The November 11 action was a long time coming. Too long. As Sisterhood readers know, for months the situation has become increasingly disturbing. There has been: bus segregation, harassment of schoolgirls in Beit Shemesh, streets free of females in Mea Shearim during Sukkot, soldiers walking out on ceremonies that include women singing in the IDF and women soldiers being excluded from Simchat Torah celebrations, in addition to disappearing and defaced images of women on Jerusalem billboards. None of it is new.

Astoundingly, until now, no Israeli women’s organization took the initiative to organize a public event of any kind to express the anger and frustration of Israeli women at these developments. So the 11-11-11 singing protest, created single-handedly by intrepid blogger Hila Benyovich-Hoffman, and promoted on her Facebook page, finally brought some objection to the public square was sorely overdue.

At the singing protest, held in the country’s four major cities, women stood and sang so that their voices wouldn’t be ignored.

The events weren’t loud or angry. Participant Rachel Neiman described the Tel Aviv event as, “in a word, mellow — more a sing-a-long, less a protest.” But they were still covered by the media. More importantly, they drew the attention of political leaders, some of whom, like opposition leader Tsipi Livni and Meretz MK Zehava Gal-On actually showed up.

That same day, a full page of fury against the behavior of the ultra-Orthodox when it come to women, was printed in the central section Friday Yediot Aharonot, Israel’s largest-circulation paper of the week. Dana Spector, whose breezy Carrie Bradshaw-esque columns normally deal with fashion, weight loss, parenting, sex and her personal life, devoted her space to detailing her outrage at the injustices.

She wrote it as an open letter to the extreme Haredim who advocate repressing and hiding women. She wrote:

What drives us crazy is that the very same people who forced us to study how we are the chosen people, how we take care of the weak and should be compassionate are those who are now willing to bully a woman simply because she is wearing short sleeves and will send a brutal modesty squad to threaten her…you have to know that we are furious at you because we are disappointed in you.

Gender issues have now moved beyond the Israeli and Jewish press, and become international news, hitting the major newswires and other publications, including the Associated Press and The New York Times.

Reuters then also decided the story was newsworthy. Other outlets, like the Los Angeles Times and the British Guardian had correspondents file their own reports.

Is the increased attention having any impact? It’s too early to tell. One sign that public pressure is exerting political influence is the fact that Jerusalem Mayor Nir Barkat, who was accused of siding with the Haredim over their gender segregation on Mea Shearim sidewalks, has spoken out publicly against defacement of billboards with women on them, with the Israeli press reporting that the mayor sent a letter to the district police commander saying:

We must make sure that those who want to advertise [with] women’s images in the city can do so without fear of vandalism and defacement of billboards or buses showing women.

Ynet reports that ultra-Orthodox Radio Kol Berama, which holds a government license and excluded women from its programs, bowed to public pressure that included a heated Knesset debate, and will now allow women to call in for an hour each Sunday morning.

An hour per week of call-in time on an obscure radio station may not seem like a great victory, but after the last several months of depressing developments, any progress toward hearing and seeing women in the ultra-Orthodox sector has to be seen as an encouraging sign.