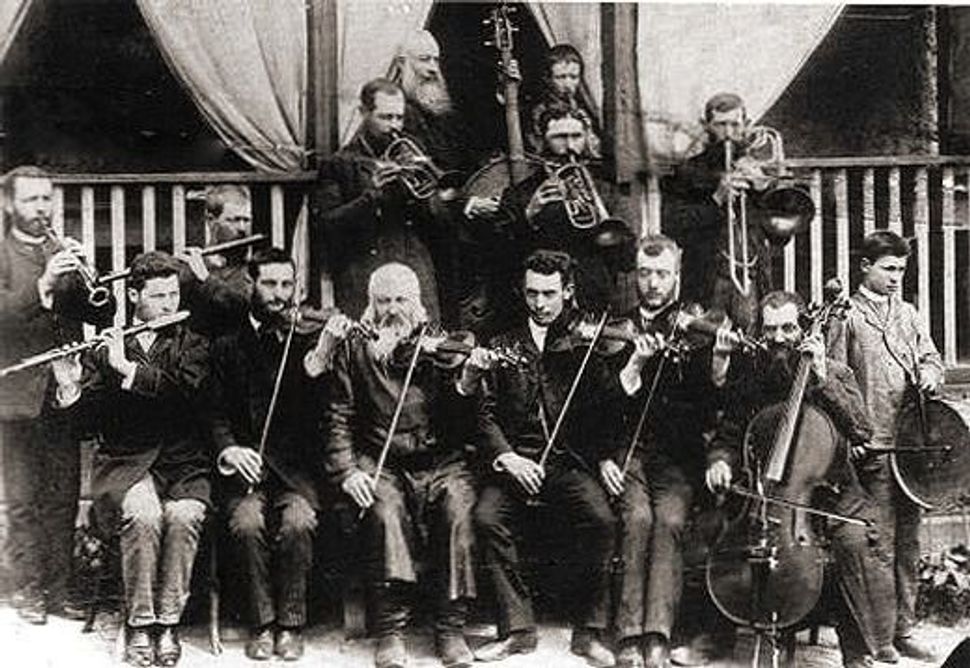 Ever since the beginning of the klezmer revival in the 1970s, music critics and musicians have wondered just how close to its European roots the music they were performing is.

The musicians of the 1970s had access to only two sources from which to learn: the few still-living musicians, such as clarinetist Dave Tarras, and the recordings of musicians such as Naftule Brandwein, Abe Schwartz and Shloimke Beckerman, which had been made in America five decades earlier. There were very few klezmer recordings that had actually been recorded in Eastern Europe and the few that were available remained the provenance of a tiny circle of musicians and scholars. As a result nobody really was sure what the music had sounded like before it came to America.

That situation has drastically changed thanks to the new album “Chekhov’s Band,” which presents 24 klezmer songs played by professional ensembles and recorded all over Eastern Europe between 1908 and 1913. The album, recently produced by the record label Renair, collects recordings released by Gramaphone across the Russian Empire, primarily on their label Zonophone. All of the records had lain in the EMI Music Archives in Hayes, England, untouched for many decades.

In fact, it was only recently that anyone even knew that the klezmer records were there, since the millions of recordings at the Archives had never previously been catalogued. Thanks to the tireless work of discographer Alan Kelly, who single-handedly catalogued the entire archive over the course of some 40 years, Michael Aylward, an expert in old Jewish recordings, was able to seek out specific titles that he knew of from record company catalogues.

Aylward was able to track down a large number of recordings that few others imagined still existed. Before he could hear them, however, he first had to deal with the EMI’s strict policies regarding where and how the recordings could be digitized. After years of delays the project to digitize the recordings was realized thanks to Renair producer Julian Futter, who made a deal with the Archives that allowed the material to be released.

“We spent so long researching the files at EMI that when we finally were shown the actual discs we were blown away by their pristine condition,” Futter recalled in an email to the Forward. “They had not been handled or played since the day, over 100 years ago, when they arrived at His Master’s Voice headquarters outside London. We felt like Carter when he opened Tutankhamun’s tomb — we were astonished at the sound quality and at the variety of the music which had been recorded.”

While some songs on the album sample famous Yiddish folk songs, others relate to events well outside those typically associated with Jewish folklore. In “606 Dance,” a band led by a loud trumpet or cornet performs a song in honor of Preparation 606, the first effective treatment for syphilis. The fact that the song was recorded in Odessa helps to explain its subject matter. Thirty of the 36 licensed brothels in the port city were owned by Jews, making Preparation 606 a cause for celebration among klezmer musicians, many of whom worked as entertainers in the same brothels.

Other songs on the album hearken back to older klezmer traditions. The most famous klezmer musician of the 19th century was Aron Moyshe Kholodenko, known as Pedotser. Although Pedotser died in 1902 without having been recorded, two of his compositions can be heard on the album.

Looking over the detailed descriptions of the songs in the album’s liner notes, it is easy to be struck by the diversity of influences upon klezmer music.

“This collection gives us a much broader view of where klezmer music was on the eve of World War I,” said Joel Rubin, a professor of music performance at the University of Virginia and a leading authority on the history of klezmer. “You can really hear that the assumption that klezmer music had gotten totally corrupted in America is not true. In fact, what we see is a back and forth taking place between the artists in Europe and America with some amount of direct contact between them.”

One of the biggest difficulties in producing the album was choosing which material to select. “There is not a single dud track in this compilation,” Futter claimed. “In fact we had a major problem in deciding what to leave.”