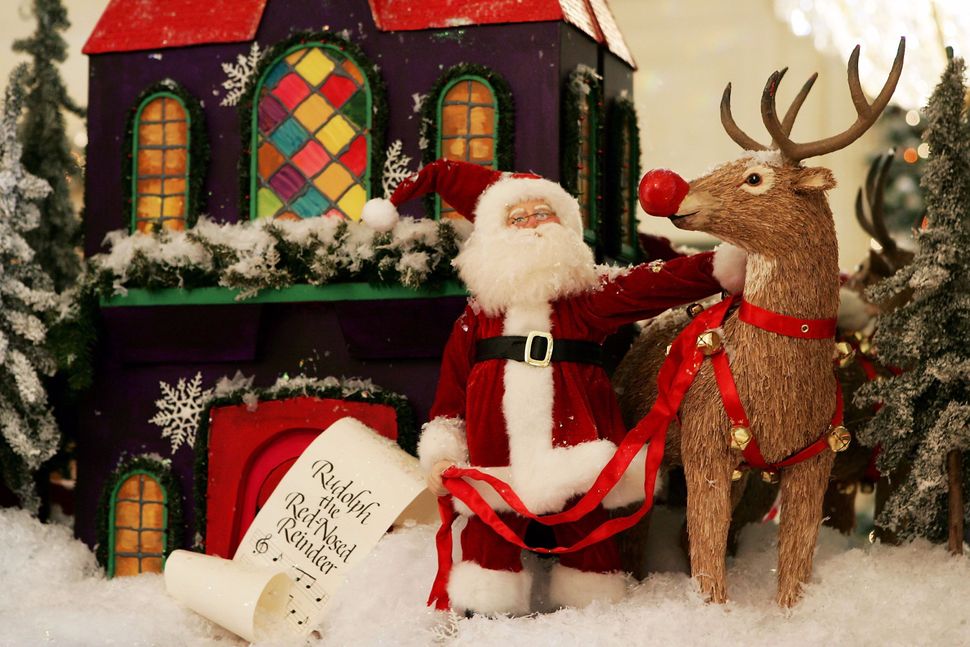 Maybe you find yourself quietly humming along to Christmas songs, not wanting to attract attention to yourself out of a sense of embarrassment or guilt.

Maybe you find yourself at this time of year overwhelmed or oppressed by the onslaught of overplayed Christmas ditties pretending to be “holiday songs.”

Maybe you secretly love Christmas songs but can’t confess your addiction out of a sense of having betrayed your forefathers or your co-religionists.

Well, I’m here to bring you the good news: Christmas songs, in large part, are actually Jewish. “Run Rudolph Run,” “Silver Bells,” “Holly Jolly Christmas,” “I’ll Be Home for Christmas,” and, of course, the (Jewish) mother of them all, “White Christmas” – all written by Jews.

It’s no secret that the number-one Christmas song of all time, “White Christmas,” came from the Jewish pen of Irving Berlin (along with “Easter Parade”). Nor is it breaking news that “The Christmas Song (Chestnuts Roasting on an Open Fire)” was written by Jewish singer Mel Torme and Robert Wells (born Robert Levinson).

But it goes much deeper than that. Some estimates put the ratio of Christmas songs to Jewish composers at 50 percent. An examination of the top 10 or top 20 most popular Christmas songs puts it even higher, close to three-quarters.

A Jewish songwriter named Johnny Marks was a veritable one-man assembly-line of popular Christmas tunes. Marks was responsible for “Rudolph, the Red-Nosed Reindeer,” “Rockin’ Around the Christmas Tree,” “A Holly Jolly Christmas,” and “Run Rudolph Run,” made famous by Chuck Berry. Marks’s output also included “Jingle, Jingle, Jingle,” “The Most Wonderful Day of the Year,” “We Are Santa’s Elves,” “The Santa Claus Parade,” “The Night Before Christmas Song,” and at least a dozen others.

Curiously, Marks’s Jewish brother-in-law, Robert Lewis May, created the character of Rudolph the Red-Nosed Reindeer in a 1939 promotional coloring book published by Montgomery Ward, the department store. That’s how Marks came to write the song about the reindeer, which cowboy singer Gene Autry took to number one on the pop charts in 1949. The record eventually sold a total of 25 million, remaining the second best-selling single of all time until the 1980s. Nice going, Johnny Marks.

“Sleigh Ride” features lyrics by Mitchell Parish, who was born Michael Hyman Pashelinsky in Lithuania. “I’ll Be Home for Christmas” was written by Buck Ram (born Samuel Ram) – who also wrote “Only You” and “The Great Pretender” – and Walter Kent (born Walter Maurice Kaufman). “(There’s No Place Like) Home for the Holidays,” made famous by Perry Como and the Carpenters, was co-written by Al Stillman (born Albert Silverman), who also co-wrote “Chances Are,” the Johnny Mathis signature tune. “Santa Baby” was a seasonal hit in 1953, written by Joan Javits (the niece of Senator Jacob K. Javits) and Philip Springer, and originally recorded by Eartha Kitt.

“We Need a Little Christmas,” written by Jerry Herman (born Gerald Sheldon Herman), was first performed by Angela Lansbury in the 1966 Broadway musical “Mame.” Showbiz was bred into Herman; his parents performed at summer resorts in the Catskills.

When part-time Shabbos goy Elvis Presley was in need of a good Christmas tune, he knew just where to turn. “Santa Claus Is Back in Town” was written by Jewish songwriting duo Jerry Leiber and Mike Stoller. “Santa Bring My Baby Back (To Me),” also a hit for Presley, was co-written by Brooklyn-born Jewish songwriter Aaron Schroeder (who wrote seventeen songs for Presley, including five that reached number one) with African-American songwriter Claude Demetrius.

One of the most popular annual TV reruns is the 1965 special “A Charlie Brown Christmas,” produced by Lee Mendelson. Mendelson hired jazz pianist and composer Vince Guaraldi to score the cartoons, and wound up co-writing “Christmas Time Is Here” with Guaraldi, a tune covered by everyone from Anita Baker to Tony Bennett to Sarah McLachlan to Mel Torme to Jewish bluegrass banjoist Bela Fleck.

“Santa Claus Is Coming to Town” got its big break when it was first aired on a radio program hosted by Eddie Cantor (born Edward Israel Itzkowitz) in November 1934. My favorite rendition of the song is the live concert recording by Bruce Springsteen and the (very Jewish) E Street Band, recorded at C.W. Post Auditorium in late 1975. I may be partial to that version because I was in attendance at that show.

One of my all-time favorite performances of a Christmas song is the bizarre duet on “Little Drummer Boy” by Bing Crosby and David Bowie, recorded for Crosby’s 1977 Christmas TV special. The story goes that when Bowie was told he and Crosby were going to sing “Little Drummer Boy,” he objected, saying he hated the song. Three songwriters – Larry Grossman, Buz Kohan, and Ian Fraser – scrambled to come up with a counterpoint number, “Peace on Earth,” that Bowie would sing simultaneously with Crosby’s “Drummer Boy.” The results were both surreal and brilliant — and I’m pleased I was able to find a way to work this one into this article.

And if you want to go all out, you can always listen to some of the Christmas albums made by Jewish artists, including Neil Diamond, Kenny G (two), Barry Manilow (three), Bob Dylan, Michael Bolton, Neil Sedaka, and Broadway star Idina Menzel (born Idina Kim Mentzel, to Helene, a therapist, and Stuart Mentzel, a pajama salesman, in Syosset, Long Island).

To make your Christmas listening easier and pain-free, I’ve put together a Jewish-Christmas playlist on Spotify that you can access here. All the songs on the playlist were either written by Jews or performed by Jews or have some Jewish connection. I threw in a few surprises, too.

Seth Rogovoy is a contributing editor at the Forward and the author of Bob Dylan: Prophet Mystic Poet (Scribner, 2009).