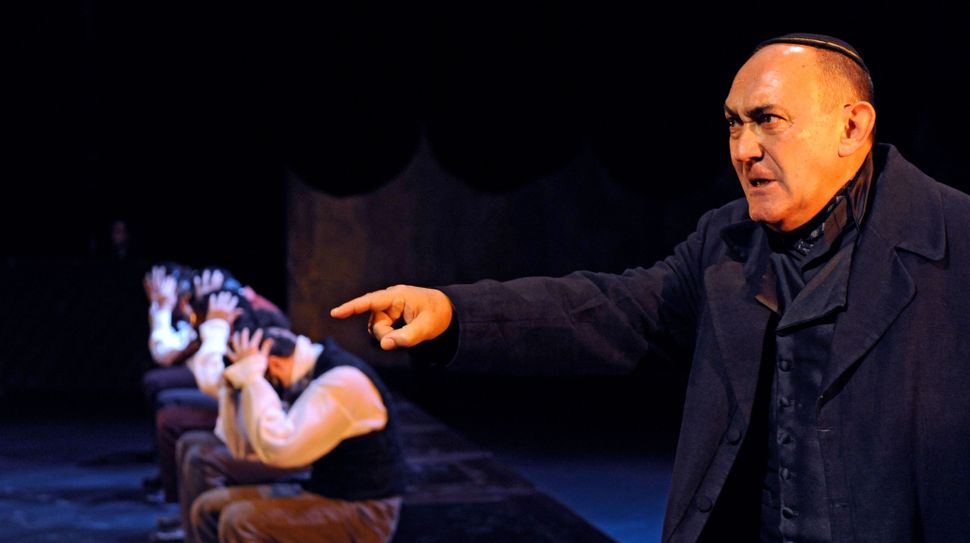 Arturo Querejeta in a 2015 Madrid production of “The Merchant of Venice.” Image by Quim Llenas/Getty Images

In May 1943, at Vienna’s Burg theater, the Nazi party staged its most famous production of Shakespeare’s “The Merchant of Venice.” It starred Werner Krauss, a man so anti-Semitic that he is said to have asked Joseph Goebbels to make a public announcement clarifying that he was not Jewish, but rather habitually played Jewish caricatures as a form of civic service.

The Burg production is widely seen as the culminating event of what had been, for the Third Reich, a propagandistic obsession. According to a 1993 New York Times article by the theater critic John Gross, the Nazis staged “The Merchant of Venice” 20 times in 1933, and a subsequent 30 times between 1934 and 1939. In the latter year, when the Nazis banned work by playwrights from the Reich’s enemy nations, Shakespeare was the sole playwright to escape the ban, although some of his plays — “Othello,” for instance — were included in it.

In a photo of the production housed at the British Library, Krauss’s Shylock is plump and well-clothed, a cruel joke given that at the same moment he was captured, most of Europe’s living Jews were emaciated and freezing. How simple to forget, if a Jew was portrayed as wealthy, warm and well-fed onstage, that the Jewish people outside were being systematically exterminated.

As Shylock Krauss stoops and snivels; his body perfectly conveys the impression of physical and moral weakness. Looking at the photograph, and thinking of the Reich-era history of the play that provides its context, it is easy to feel outrage alongside grief. How could Shakespeare, whose mind was both beautiful and rigorous in seeking nuance, have created something so easily used for evil?

Most of the time, the man was too good at his work to stumble into the traps of bias that often ruin lesser artists. “The Merchant of Venice” is one of the plays in which his judgment appears most questionable, a subject scholars have debated for centuries. Harold Bloom, one of the most eminent Shakespeare scholar of recent decades, comes down against the bard on this point. “How does one estimate the lasting harm done by Shakespeare’s and Dickens’s egregious Jews? Himself a usurer, Shakespeare must have known how much he had invested in Shylock,” Bloom wrote in The New York Times in 2010. “Is that why he punishes the Jew with such ignoble humiliation?” (He later added that “the humanizing of Shylock only increases his monstrosity.”)

Stephen Greenblatt, another prominent figure in Shakespeare studies, has seen reason to agree with Bloom. “Jews in England in the late 16th century existed principally as fables and as figures of speech, and Shakespeare often reflected and furthered this circulation, apparently without moral reservation,” he wrote in The Times in 2004. “Not only does Shylock have many villainous qualities, but the average reader must also get the notion that Shylock is a typical Jew, and this is what Jews are like,” wrote the scholar Herbert Bronstein in a 1969 paper in Shakespeare Quarterly.

Yet the last century and a half of performances have tended almost unilaterally towards sympathetic portrayals of Shylock. Even Werner Krauss played a less grotesque Shylock, if not a more sympathetic one, prior to the rise of the Nazis; he once played the role in a production directed by the Jewish Max Reinhardt, which Peter Marx describes as taking the form of an “apolitical” comedy. And Greenblatt, in a 2017 essay in The New Yorker, took a somewhat different view on the anti-Semitism in “The Merchant of Venice,” considering whether the text might be more “a pessimistic vision… of the prospect of mutual tolerance” than an expression of biased scorn toward its Jewish antagonist. Shakespeare, he wrote, apparently intended to write “The Merchant of Venice” as “a straightforward comedy.” Tough luck: Per Greenblatt, the difficulty was that Shakespeare “[found] himself increasingly drawn into the soul of the despised other.”

Even if Shakespeare’s empathy for Shylock was not enough to sway the play away from anti-Semitism, it was enough to make Shylock more than a canard. Every scholar I have cited has written of the power of the speech in which Shylock asserts his humanity, a speech no true anti-Semite would be capable of writing: “I am a Jew,” Shylock says. “Hath not a Jew eyes? Hath not a Jew hands, organs, dimensions, senses, affections, passions; fed with the same food, hurt with the same weapons, subject to the same diseases, healed by the same means, warmed and cooled by the same winter and summer as a Christian is?”

Could Shakespeare’s evident, if patchy, empathy for Shylock be the reason the play so invites anti-Semitism? After all, it is more fulfilling to hate the person who you see as having humanity than to dismiss a person who appears to be a shell. When Shylock loses his case to collect his debt from Antonio, the Christian merchant who has agreed to forfeit a pound of flesh to him, he asks “Shall I not have barely my principal?” or the amount of his initial investment in Antonio’s ventures. His plea is met with a taunt of “Jew.” Principal-principle: The pun is clear.

It is Shylock’s claim to his Jewish principles, as much as his demand for compensation, that earns him scorn. Rather than grant Shylock his principal, the Duke of Venice, hearing the two men’s case, invokes a law that dictates extreme financial punishment for “an alien” who makes an attempt on the life of “a citizen.” Antonio suggests a less dire fiscal penalty, in exchange for an added spiritual one: Shylock must convert to Christianity. The Duke readily agrees. So does Shylock, who is even more readily mocked for his decision.

Does the play approve of this hasty conversion? Greenblatt, in 2004, wrote “the mockers are probably the least likable characters in ‘The Merchant of Venice’… their grating words are repeatedly registered as embarrassing, coarse and unpleasant.” They also betray the Christian ideal of mercy, of which Antonio has just made a dubious demonstration. One, Gratiano, says he would rather see Shylock escorted “to the gallows, not the font.” The text looks more unkindly on Gratiano’s dismissal of his Christian values than Shylock’s abandonment of his Judaism, spelling out the former and leaving the latter to happen largely offstage. The play urges, in this climactic scene, a commitment to principles. For Jews, those principles have always included that of rigor in interpretation. “The Merchant of Venice” will never stop requiring that its readers, audiences and critics reckon with its problems and prejudices. It is sure to be used as propaganda in the future, again and again. But does that mean we should reject it? Shakespeare was always a step ahead of us. The answer is in the play.