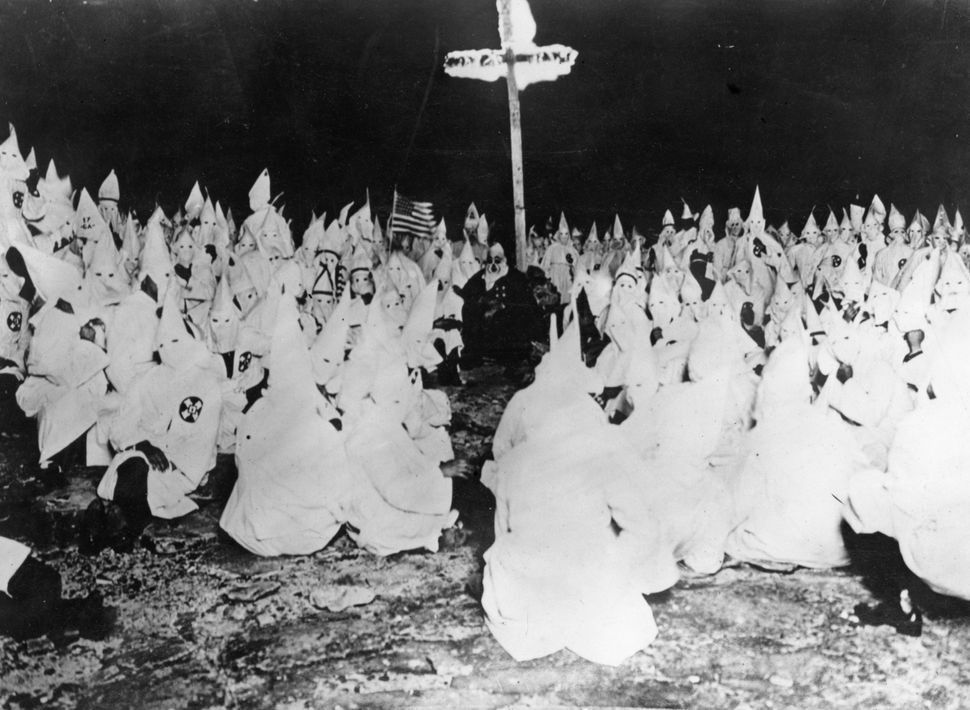 A midnight meeting of the Ku Klux Klan in 1922. Image by Getty Images

Last month, the Neo-Nazi site the Daily Stormer called for a “troll storm” against Jews in Whitefish Montana, the hometown of “alt-right” white nationalist leader Richard Spencer. A grassroots campaign against Spencer’s brand of white nationalism had been simmering here for months and recently came to a head.

Andrew Anglin, who runs the Daily Stormer website, has even called for an armed march. But Anglin’s efforts so far have focused on aggressive trolling, a tactic he has employed before.

Many people are receiving threats, mostly via email. One meme depicted a local realtor being crushed by a steamroller, driven by “alt-right” icon Pepe the Frog. “Go choke on a shotgun and die,” read another message. “You would all be of greater worth to society as human fertilizer than as citizens.”

This trolling from Neo-Nazis, rallying around “alt-right” figurehead Spencer, is the most concerted online effort since the election pushed the “alt-right” into the spotlight.

Their tactics are similar to those of an older generation of white supremacists — but altered for the Twitter era.

“That this site can post this and people are getting hate mail and death threats, it shows you the ability of this movement to mobilize with the digital age,” said Kelly Baker, author of “Gospel According to the Klan.”

The alt-right harnesses “troll culture and call-out culture,” Baker said, in a way that is somewhat similar to the “scare tactics” used by the Klan in the 1920s, such as mounting boycotts against Jewish shop owners or burning crosses on lawns. “They would try and intimidate business owners who didn’t agree with the Klan’s positions.”

And while digital harassment is often been seen as “ephemeral” — threats that pale in comparison to things like marches or demonstrations — online trolling similarly aims to silence criticism.

“The alt-right has been able to mobilize, using things like memes, which people don’t quite take as seriously as they should,” said Baker. “There would be more outrage of they were burning crosses in lawns.”