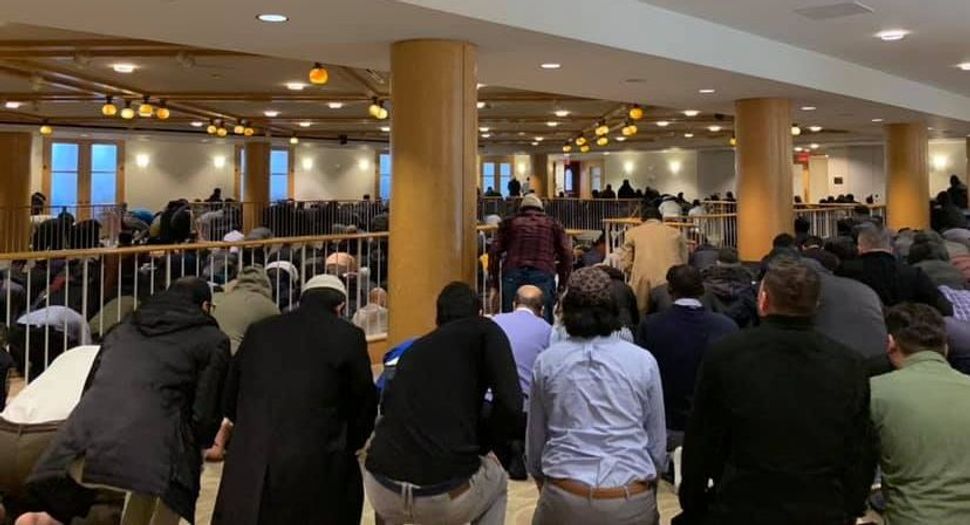 Central Synagogue, a historic New York congregation, opened its doors to the congregants of a nearby mosque after damage from a recent fire in their building prevented them from holding Friday prayers. Friday is the holiest day in the Muslim week, and Muslims traditionally gather for prayer in the early afternoon, called Jummah.

Central’s act of hospitality comes one week after a massacre of Muslims at two mosques in New Zealand. In the wake of the attack, Jewish communities around the world visited local mosques in acts of solidarity, forming welcome lines and holding supportive signs.

The mosque, the Islamic Society of Mid-Manhattan, was temporarily closed two days ago after a fire started in a restaurant occupying the first floor of its building. FDNY officials told local media that the mosque was not damaged in the fire. The mosque is just one block east of Central Synagogue in midtown Manhattan.

On Friday afternoon, the imam of the mosque had been hoping that the fire department’s investigation of the building would be done in time for Jummah. Outside the mosque, several members of Central Synagogue had already gathered to welcome them in, as they had done last Friday.

When it became clear that the growing crowd of congregants waiting to go inside would likely be turned away, the Central members invited them to the synagogue, according to Rabbi Stephanie Kolin, a rabbi at Central.

Over the next several minutes, over 600 Muslims walked a block east to Central, and filed into the synagogue’s indoor pavilion, leaving their shoes in the hallway. A facilities manager at Central located a hand-washing station for the Muslim congregants, since hand-washing is a part of Jummah prayers. Kolin said that the entire space was filled with supplicants.

“It was one of the most beautiful sights I’ve seen in my life,” she said, adding that many people in the room were in tears in response to the religious solidarity on display in the moment.

Kolin said that the Islamic Society’s imam spoke about how he had had a plan for how to conduct that day’s prayers, marking one week since the New Zealand massacre. But, he said, “Allah had a better plan.”

In a sermon, the imam called the prayers “one of the most blessed moments of my life in New York.” He told the attendees that this was a moment they would talk about with their children and grandchildren. He said the moment showed that “light can come out of darkness.”

Watch the imam’s sermon below.

Rabbi Angela Buchdahl, the leader of Central, posted on Facebook that the moment was one of her community’s holiest moments.

There have been many other instances of Jewish-Muslim solidarity. In 2017, a synagogue in Victoria, Texas, gave a local Muslim congregation the keys to their building after their mosque burned down in a fire. Also in 2017, a Jewish community in Florida helped fundraise to rebuild a mosque damaged in a hate-fueled arson attack.

Kolin said that having the Islamic Society pray in Central was deeply powerful.

“I feel like I’m still integrating it,” she said. “I’m still a little shaking from the spiritual power of what happened.”

Kolin said she spoke at the end of prayers at the invite of the Islamic Society’s leader, and spoke about how the attack on the mosques in New Zealand and the attack on the synagogue in Pittsburgh are part and parcel of the same violent ideology.

“These attacks on our communities are one and the same,” she said. Kolin’s words at Central were met with a round of applause from the Muslim guests.

Watch an excerpt of Rabbi Kolin’s speech below.

During Kolin’s speech, the imam led his congregation in call in response.

“Do you love this beautiful experience?” “Yes!”

Then he asked his congregation to bless the synagogue and its rabbis, and they did.

This article has been updated with additional information.