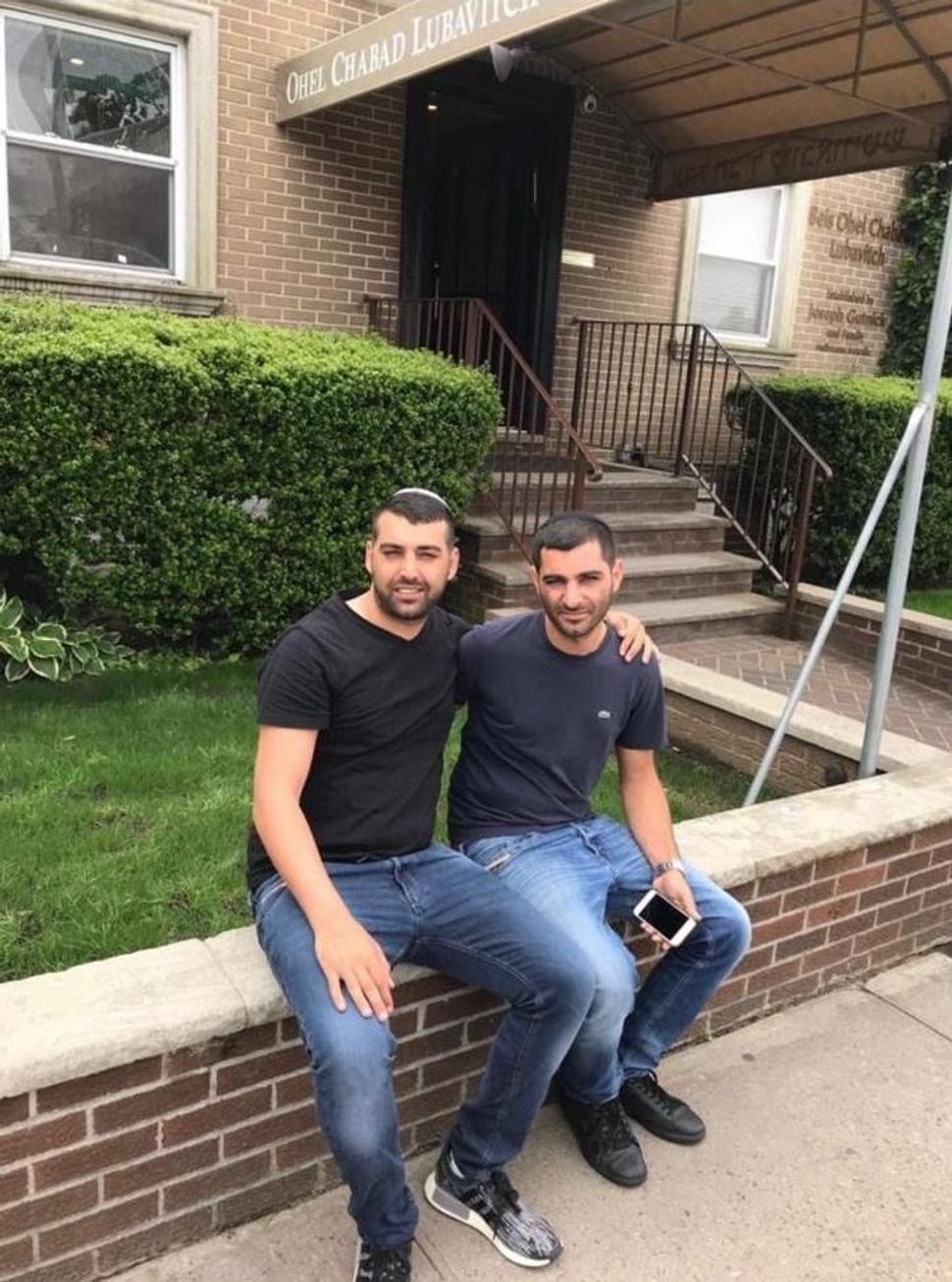 Jake Peretz, left, and Almog Peretz, right, in front of a Chabad center in New York several months ago. Image by Courtesy of Jake Peretz

Two of the three people injured in the Poway synagogue shooting are related.

The young girl injured in the Poway synagogue shooting Saturday is the niece of the Israeli man who was injured shepherding several children to safety out of the sanctuary, according to the man’s brother.

Almog Peretz, 34, managed to rush several chidren out of the sanctuary in the seconds after the shooter walked in and shot the rabbi in his hand. It’s not clear if one of the children he grabbed was his niece, Noya Dahan, who was taken to the hospital to be treated for injuries related to the shooting.

Jake Rotem Peretz, 36, brother of Almog and uncle Noya, spoke to the Forward by phone from his home in Queens, New York. He says he has not spoken directly with his family members, but has been receiving text message updates along with the rest of his family from his sister, Eden Dahan, the mother of Noya.

Jake said that Almog is a selfless person, and he was not surprised to learn that Almog had herodically rushed several children out of an emergency exit.

“He’s not scared of nobody,” Jake said. “He has a good heart. He doesn’t care to die to save kids. He loves children.”

“I knew it would happen someday,” Jake continued, “if he was somewhere [where there was a shooting], he would be the first help.”

“If one of the girls had been wounded – it would have been on my conscience,” Almog told Israel Hayom. “There have been some very touching conversations, everyone here has commended me and strengthened me, cared for me – and thanked me.”

Jake, Almog and Eden are three of six siblings; the other three live in Israel, according to Jake, who is the oldest. They were raised in Sderot, Israel, a town roughly half a mile from the border with Gaza that has endured rocket fire for years from militant groups in the Gaza Strip.

“We left Sderot because of qassimim,” Jake said, referring to Qassim rockets in Hebrew.

In recent months, Almog has been living in his sister’s guest house, between going back and forth to Israel. They often go to the sister’s house for Passover, Jake said, and this year was no different.

Jake and his wife and child only just returned from Poway on Thursday. Jake said that it was due to a mistake on his part that his return flight was Thursday, and not Sunday, the day until which they had originally planned to stay.

“I’m going to do birkat hagomel, because if I was there, 100% I would have been at the synagogue,” Jake told the Forward, referring to the prayer traditionally said after surviving a near-death experience or a long journey.

He said he still hasn’t finished unpacking his suitcase. Now they’re considering flying back to Poway to be with their family.

Jake said he knows the synagogue well from all the times he has attended for holidays and other Shabbats. He is friendly with the other Israeli family there, the Almogs, as well as the rabbi, who was shot in the hand and is stable according to news reports. 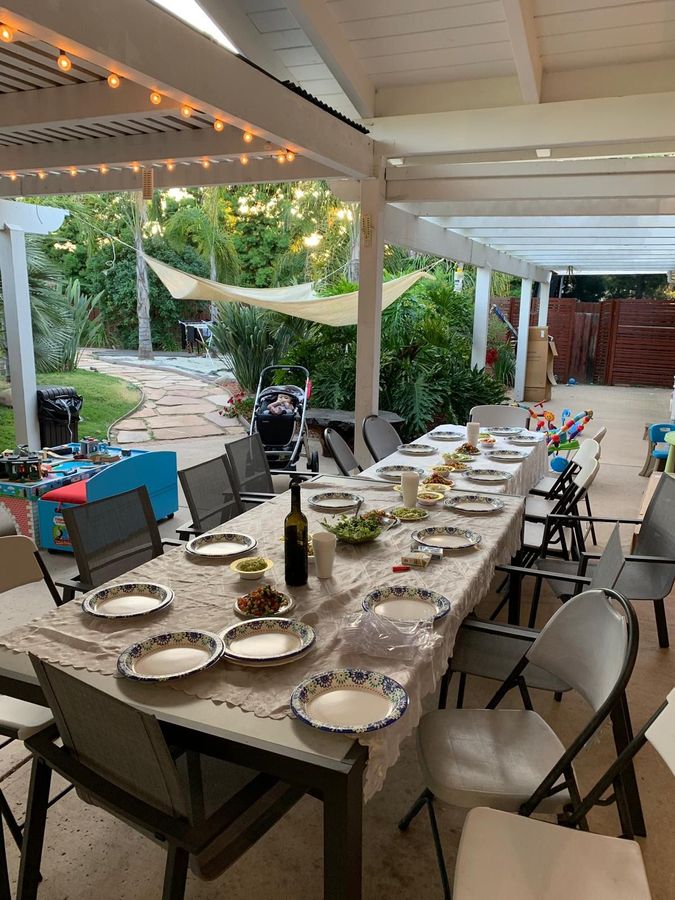 The Dahan/Peretz seder table. Image by Courtesy of Jake Peretz

The Peretz family is Sephardic, and a video of the seder Jake shared with the Forward shows the family enjoying a backyard seder as Middle Eastern pop music blares. Two-liter bottles of Coca-Cola and juice, as well as large pots of food, dot the table, filled in by many other smaller plates of salads and appetizers. The grill is going strong in the background.

Almog can be seen dancing to the music with Noya — just one week before he tried to save her from a shooter in their synagogue.

Jake spoke to the Forward in an obvious state of distress. He has not been able to speak directly to his family members yet. He said that he and his wife are unsure what to do right now.

Jake shared a photograph that Almog had sent to him: His brother, up and walking around the synagogue, with a slight smile on his face. 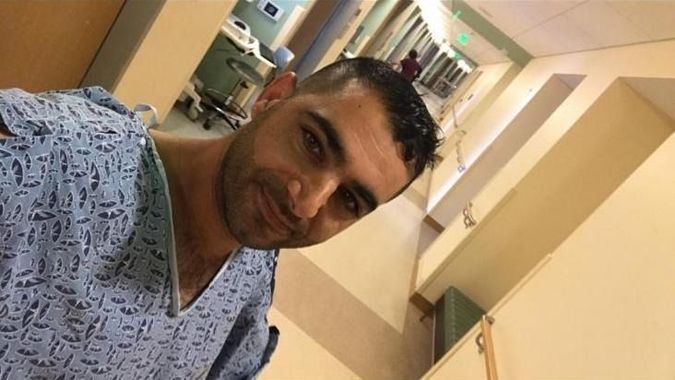 Almog Peretz in the hospital on Sunday. Image by Courtesy of Jake Peretz