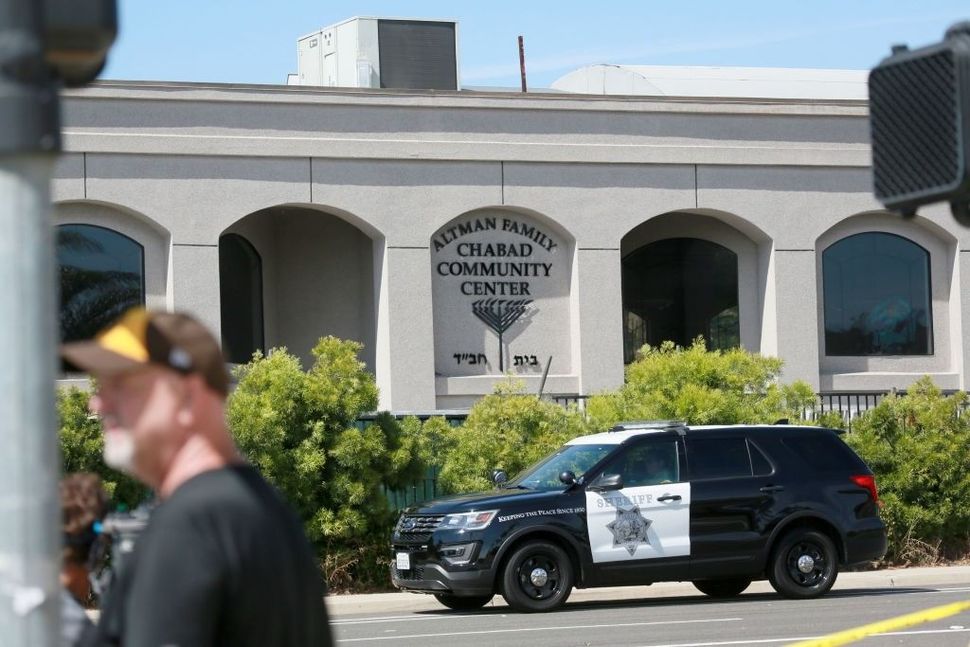 Neighborhood residents and members of the media stand before the Chabad of Poway Synagogue after a shooting on Saturday, April 27, 2019 in Poway, California. Image by SANDY HUFFAKER/AFP/Getty Images

The family of the man accused of conducting a mass shooting at a California synagogue aren’t planning on paying for a lawyer for their son, the Associated Press reported Tuesday.

Nineteen-year-old John Earnest will be arraigned on Tuesday and charged with felonies in connection to the synagogue shooting, as well as the arson of a nearby mosque last month, for which a manifesto issued in the shooter’s name took credit. An attorney for the Earnest family, Earl Plott, told the AP that they likely won’t be helping their son with his legal representation, and so Earnest will probably have to use a public defender.

The family issued a statement on Monday expressing their “great shame” that their son, who allegedly killed one person and injured three more, is “part of the history of evil that has been perpetrated on Jewish people for centuries.”

Earnest reportedly lived with his parents while studying nursing at California State University, San Marcos. Earnest was a varsity swimmer and acclaimed student and pianist at Mt. Carmel High School in San Diego. “Crowds would be cheering his name,” during his piano performances as talent shows, former classmate Owen Cruise told the AP. “Everybody loved him.”

Earnest’s father is a popular physics teacher at Mt. Carmel; on the morning of the shooting, Earnest’s father was hosting a study hour in his home and provided cookies for the visiting students, Cruise said.

“He was very close to his dad,” the classmate said of John Earnest. “He always hung out in his classroom, came to see him at lunch. He always seemed like a nice guy … He didn’t seem like the type of person who would go off the deep end.”