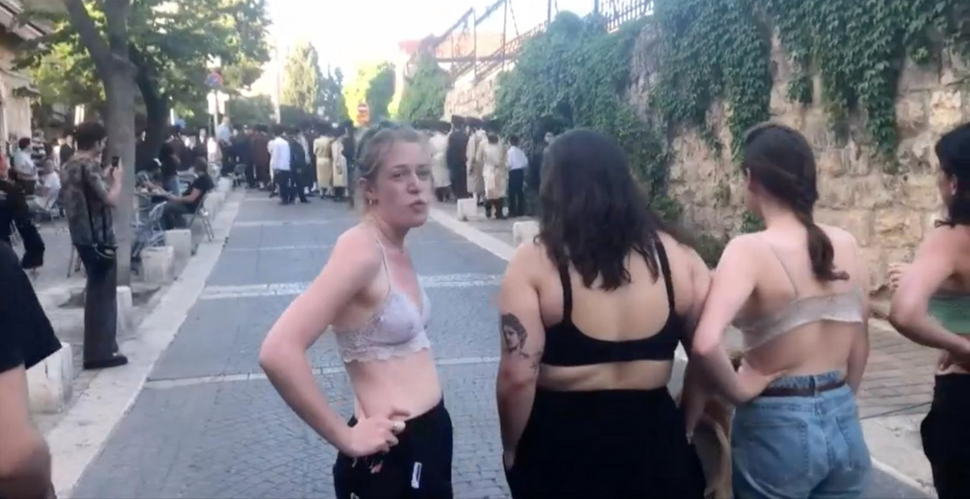 A protest and counter-protest in Jerusalem over the Eurovision Song Contest being held over Shabbat. Image by BBC

Hundreds of ultra-Orthodox Jews clashed with police in Jerusalem over the weekend in protest of the Eurovision Song Contest final, which was held on Shabbat.

The impassioned crowd blocked Haneviim Street and stopped traffic on Saturday, The Times of Israel reported. Protestors attacked officers responding to the demonstration, and one was arrested.

The protestors, shouting “Shabbes” in Yiddish, claimed the scheduling of the international contest was a “desecration” of the Jewish day of rest, the BBC reported. A small group of women held a counter-protest by taking off their shirts, revealing their bras and causing the protesters to go elsewhere. Orthodox Jews live by strict modesty codes and are forbidden from looking on immodestly-dressed women.

Ultra-Orthodox Jews protested and blocked roads in Jerusalem against what they see as violations of Sabbath.

Women responded by taking off their shirts, which promptly scared the religious protesters off. Story by neighbourhood correspondent @tombateman https://t.co/wv3XoVgBR1 pic.twitter.com/AHtnfSxsXP

Eurovision was held in Tel Aviv this year. The final began after Shabbat ended at sundown, but preparation took place throughout the day.