How The Shabbat Dinner Is Becoming Trendy 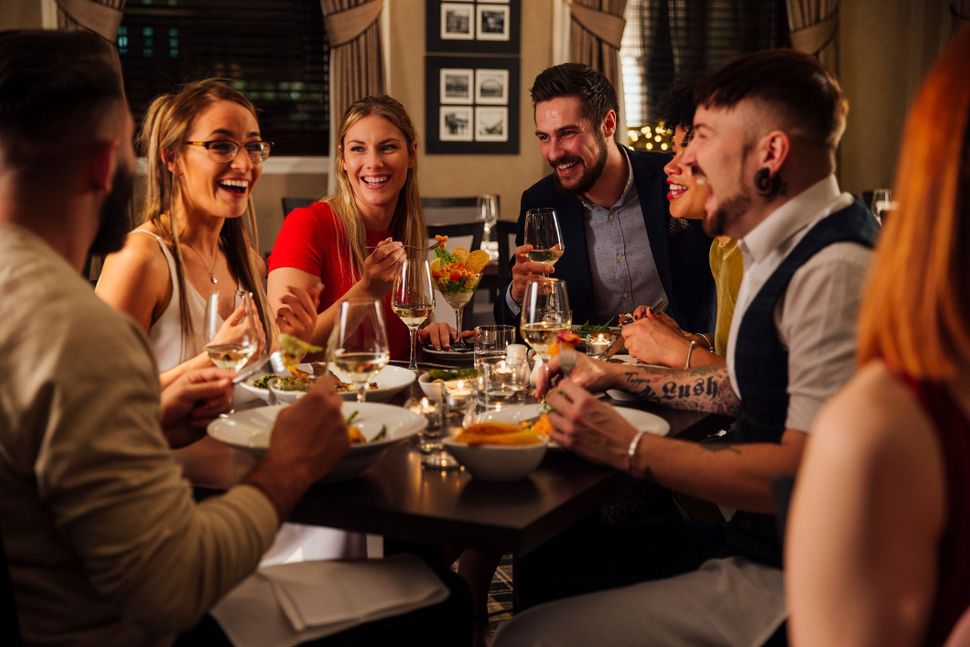 Shabbat, that traditionally religious, meditative bookend of the working week, seems to be undergoing something of a renaissance.

“The concept of spending quality time with friends and family while taking a break from scrolling on Instagram—is for everyone,” Ariel Okin wrote in a 2017 Vogue article, ‘How To Host A Shabbat Dinner And Why You Should – Even If You Aren’t Celebrating’. “It is an ancient antidote to our modern ailments.”

Ancient antidote indeed. If you believe the press, all the cool Jewish (and even some non-Jewish) millennials, Hollywood celebrities and trendsetters are hosting and attending Shabbat dinners. In an exchange of emails between Natalie Portman and Jonathan Safran Foer, later published in the New York Times, Portman wrote: “Shabbat is such a lovely idea that I’m trying to revive in my life. We aren’t allowed to move a book from one place to another on Shabbat, or turn on a light, or buy something — because those things would show the passage of time. And Shabbat is the one day when we can stop time.”

Mila Kunis recently told the Jerusalem Post: “We (Ashton Kutcher and I) do Shabbat at our house. At Shabbat, you have a sip of wine. Friday mornings, my daughter wakes up and I say it’s Friday, she says, ‘I can have wine!’”

A few months earlier, Ashton Kutcher posted a Shabbat photo and message on his Instagram feed; it acquired 4,000 likes in under an hour.

Meanwhile Madonna, a follower of Kabbalah, was widely criticized for wishing her followers what some have called an inauthentic “Shabbat Shalom!” by tweeting her sentiment on a Saturday afternoon.

Most recently, Shabbat has come to the White House, too, when Trump administration officials ended their first week in office in 2017 by attending a Shabbat dinner at the home of Ivanka Trump and Jared Kushner. The couple’s whereabouts on Shabbat are now being closely followed by the international media.

Due to the nature of tech addiction and social media, Shabbat is perhaps more relevant today than in any other period of history.

Today, many are using Shabbat as a concentrated time to unplug from their digital devices. Irene Michaels, an expert in Holistic Health at Saint Catherine University in Minnesota, conducted research which found that unplugging during Shabbat led to participants feeling healthier both physically and emotionally, as well as more socially connected.

Those feeling lonely – and particularly those looking for a match — often look to Friday night dinners as a solution.

“I live in central London and I’m single. I’m looking for someone Jewish but I feel like I’ve exhausted JSwipe. So almost every Friday I go to a Shabbat dinner for young professionals hosted by the Center for Jewish Life or my shul”, says Cara Harris, 35, an accountant who came to London from San Francisco for work. “I’ve met a few good guys through these and it’s always an interesting evening. And if I don’t meet a guy, it’s a fun night out with delicious food and a comforting ritual to close out the week. Shabbat dinner shouldn’t just be for families; singles appreciate them too,”

Lauren Adilev, 50, from Neve Daniel, Israel, met her ex-husband at a Shabbaton (a Shabbat dinner organized by either a shul or an organization, typically taking place in a hotel or at alternate family’s homes). The dinner is typically followed by an oneg (party) with some mingling and sometimes a lecture on a Torah portion. “I didn’t go to meet anyone,” she says. “I was there to get off the couch. I liked the event, there were nice people. 19 weeks later, I got married to one of the men I met that night.”

For those not necessarily looking for love, but who live alone and are simply looking for some company when lighting candles on a Friday night, there are plenty of options: Shabbat isn’t just for the family anymore.

A new documentary making the rounds at Jewish film festivals, Wendy’s Shabbat, tells the story of senior citizens living in Palm Desert, California who usher in the Sabbath with a meal together in their local Wendy’s, by candlelight, with challah and wine served alongside chicken nuggets and fries. Kosher, hardly; but sincere, sweet and meaningful – very.

Singles and seniors finding community through Shabbat dinners are in very good company. For many American Jewish college students, Shabbat has become the cornerstone of their Jewish engagement; Shabbat dinner being a regular social event on many campuses, with organizations like Bring Back Shabbat and Hillel spearheading the movement.

“Hillel would host either a Shabbat and sushi or Shabbat and pizza event, followed by a Q and A session,” she says. “I really enjoyed these; it felt like the first time I was able to have my own religious experience. Growing up, I always felt like Shabbat dinner was something I was doing for my mom or to accompany friends. Attending Shabbat during college was the first time that I was deciding that this was something I wanted to do only for my own benefit. These dinners were a part of what led me to make the decision to convert to Judaism.”

Bring Back Shabbat was founded as a Birthright follow-up program and currently operates on 26 college campuses in North America. “There’s a real need and interest in Shabbat on campus,” says Lily Stute, Bring Back Shabbat’s director. “Shabbat can mean different things to different people: for some, Shabbat is an opportunity to share a grandmother’s recipe with friends while others are excited by facilitating a conversation to debrief a long week. Most students are just happy to unplug, light some candles, and talk over an old fashioned, homemade dinner.”

Others find an opportunity for a women’s retreat, in the Shabbat experience.

Rachel Pearl, 45, from Queens, New York, considers herself fairly conservative in her approach to keeping Shabbat. Still, she hosts a group of women, and only women – no girls, boys, babies or men allowed – for Shabbat dinner on the first Friday of every other month. She’s married with one son; she sends her men to her husband’s parent’s house on the nights she is hosting her female friends.

“Some people find it strange that I kick Asher (my husband) and Jon, my boy, out of the house, to have my female friends over,” she says. “But we find such solidarity and nourishment by being together, celebrating our unique role in Shabbat while at the same time being able to step away, for a few hours, at least, from our roles as wives and mothers. Asher thinks it’s great for our marriage, actually – I’m attending to my own spiritual needs, and that can only be a good thing for the two of us.”

Others at Rachel’s synagogue are starting to follow her lead and host their own dinners just for women. And it’s clear that a movement is underway elsewhere, too: Women-only overnight Shabbat retreats are now being held all over the U.S, many organized by regional branches of Chabad Lubavitch.

And it’s not just for Jews, either.

Many hosting a Shabbat dinner don’t feel obliged to restrict attendance to those that are Jewish. Kylie Ora Lobell, editor of Jewess Magazine, 29, from Los Angeles: “As a convert, I find it very important to have all sorts of people at my table,” she says. “We want to show our friends who are not as observant as we are what it is like.”

Shabbat diversity goes deeper than Jewish or not: straight, gay or in between, the all-inclusive Shabbat doesn’t discriminate. Al Rosenberg, director of marketing and communications at OneTable, an organization which helps those in their 20s and 30s to find and to host Shabbat dinners, recently wrote a piece for the new Jewish millennial woman’s magazine, Alma: ‘How I Created a Monthly Queer Shabbat and You Can Too.’ In it, she writes: “If a queerdo like me can host a Shabbat dinner, then so can you.”

As pop star Katy Perry recently told Cosmopolitan magazine: “I wish there was a thing like Shabbat for the whole world, but not particularly religious-based.” It looks like Katy’s wish might just be starting to come true.

How The Shabbat Dinner Is Becoming Trendy