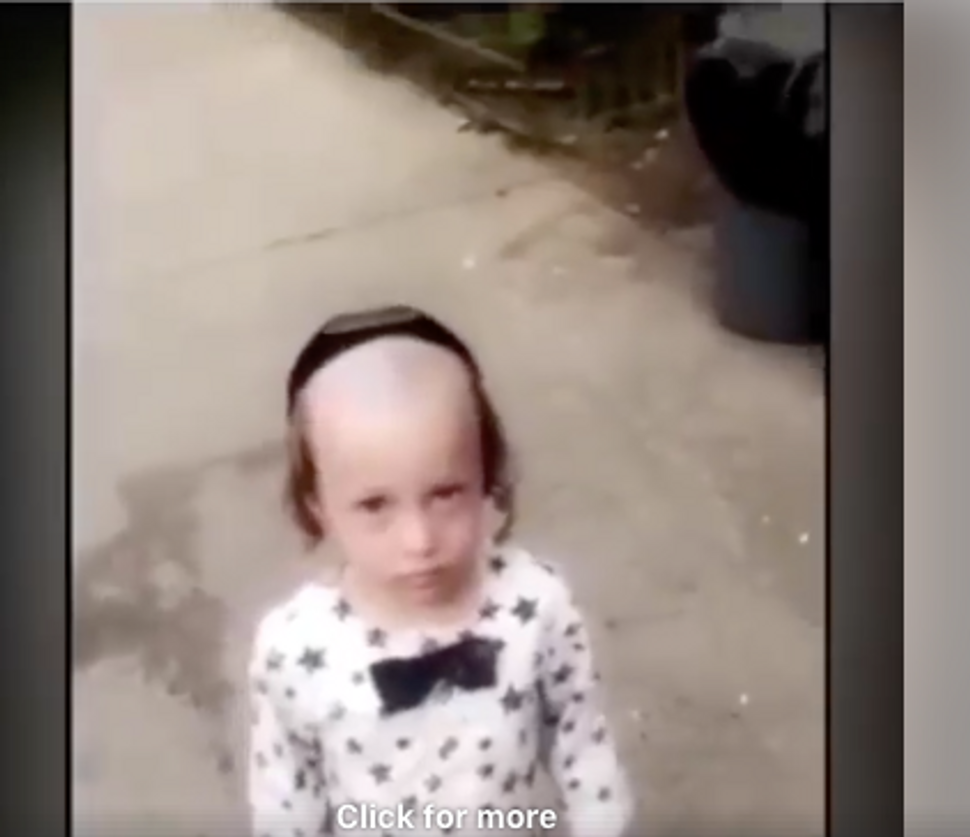 This is not the first time that the video of the Hasidic boy has surfaced the internet. Image by Facebook

Almost exactly a year ago, Quai James became internet infamous when a video surfaced of him taunting a young Hasidic boy on the streets of Brooklyn. The initial clip, which gained over a million views within its first days of hitting the internet, featured him saying, “I’d be crying if I looked like that too, bro. That’s f**ked up what they be doing to y’all.”

The incident prompted discussions within the Jewish community about anti-Semitism and the power of social media. But it became even more impactful after James realized his mistake and tried to make amends.

But even though James deleted his video last year, it found itself back on Twitter over the weekend.

Because the internet is a cesspool from which nothing can ever escape, that viral video from last year mocking a Hasidic child resurfaced – and got more than 10,000 retweets before the account was deleted pic.twitter.com/MqenIZmVmK

The Forward reported on this story from the beginning. Here’s what you need to know:

Viral Video Of Grown Man Taunting Hasidic Boy Gets Millions Of Views
The video, first found on Facebook, was criticized all over social media. “If you make a video like this or laugh at it you are absolute garbage,” one user wrote on Twitter at the time.

Man Apologizes For Viral Video Taunting Hasidic Child
Soon after the video went viral, James posted a clip to his Twitter account, apologizing for what he said about the child.

Good afternoon to everyone watching .. I’m truly sorry for my actions .. @FonrougeGab pic.twitter.com/HaO4cwGaWN

Quai James Does Teshuva At Jewish Soup Kitchen
Close to two weeks after the scandal, James was seen volunteering at Masbia, a Jewish soup kitchen in Brooklyn. “I myself reported the original clip to Twitter,” Masbia executive director Alexander Rappaport said at the time. “But I have something to learn from Quai, and that is how to sincerely apologize.”

Early morning @quaijames came to #volunteer at #Masbia of #Flatbush on the invitation of our supporters and volunteers on @Twitter to serve people in need and to learn how to further bridge the gap between communities. pic.twitter.com/WQ96i4eWNI

He Went Viral For Mocking A Jewish Child’s Hair – But Will Be Remembered For His Heartfelt Apology
As the scandal was occurring, James stopped by The Forward to talk about the video and the aftermath of the incident.

How Internet Culture Gave Us A Video Of A Hasidic Boy Being Taunted
In an opinion piece, writer Ben Faulding discusses how the nature of the internet and the introduction of the since-defunct app Vine led to videos such as the one James recorded.