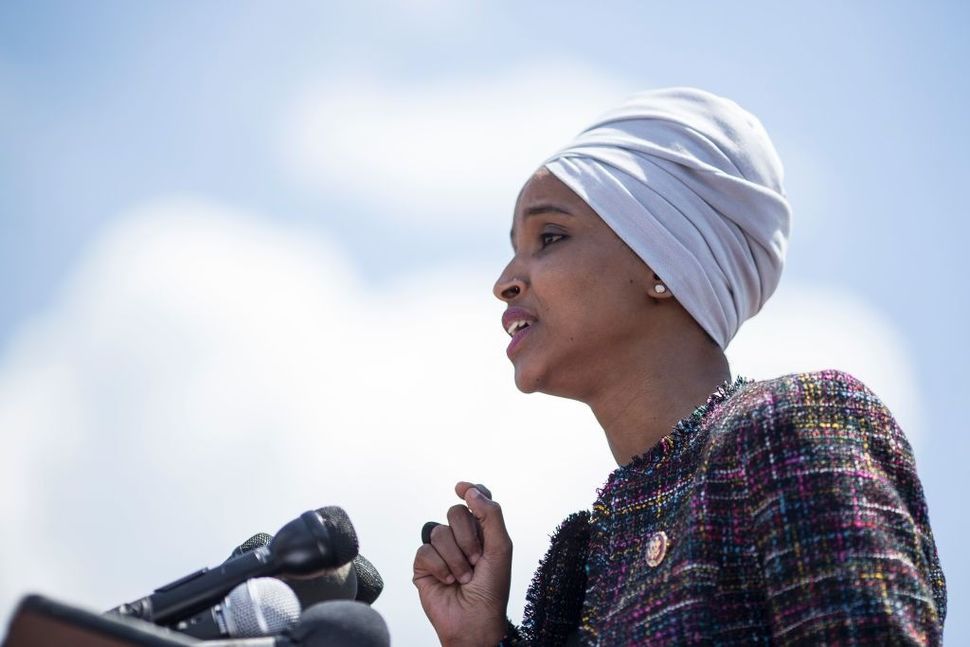 Rep. Ilhan Omar (D-MN) speaks during a rally to express solidarity with immigrants on May 16, 2019 in Washington, DC. Image by Zach Gibson/Getty Images

Rep. Ilhan Omar plans to join the new Congressional Caucus on Black-Jewish Relations, a spokesman confirmed to the Forward on Thursday.

Omar, a Democrat from Minnesota and one of the first Muslim women elected to Congress, had already praised the creation of the group on Twitter. “Last month, [Rep. Jan Schakowsky] and I joined together to talk about the common threat of white nationalism faced by Muslim, black and Jewish-Americans,” she wrote on Wednesday, linking to their joint CNN op-ed. “Glad to see colleagues follow through in working on the things that unite us and not divide us.”

The black-Jewish caucus was announced on Monday at the annual convention of the American Jewish Committee. “The African-American and Jewish communities have a history of standing together for the promotion of social justice and civil rights,” said Democratic Rep. Brenda Lawrence of Michigan, one of the co-founders. “There are very few segments of America that have invested themselves in these struggles as much as these communities,”

The formation of the caucus has to be approved by a congressional committee before members can join, but this is a formality and is expected later this week or early next, congressional sources told the Forward.

The new caucus, which was designed in part to combine resources to fight the shared threat of white nationalism, attracted some criticism on the Jewish left, as well as Women’s March leader Linda Sarsour, because caucus co-founder Rep. Lee Zeldin of New York has held fundraisers with two former Trump advisors with ties to white nationalists: Steve Bannon, who once called his website Breitbart “the platform of the alt-right,” and Sebastian Gorka, a longtime member of a Hungarian group with historic Nazi ties.

Those activists also took issue with the fact that Zeldin, one of two Jewish Republicans in Congress, is the most zealous congressional critic of Omar, and has pushed for Congress to expel her from the House Foreign Affairs Committee and pass a resolution condemning her by name.

“Just to be clear, my endorsement of the caucus and willingness to unite our communities against the threats of White supremacy isn’t an endorsement of Zeldin’s bigotry!” Omar tweeted on Thursday. “Linda’s point still remains valid but my hope here is that Zeldin can learn and grow.”

Zeldin hit back a few hours later. “This new Caucus is a positive, bipartisan push to build bridges between 2 groups,” he tweeted at Omar. “Be helpful, accurate & better. Unite; don’t divide or try to poison like this latest personal attack. This is bigger than us & we have to be better than this.”

Omar apologized earlier this year for comments about Israel that many in the Jewish community — including Jewish peers in Congress — found anti-Semitic. She has also continued to face criticism for her support of the boycott, divestment and sanctions (BDS) campaign against Israel, which some consider anti-Semitic in its focus on the Jewish state.

A spokesman for the American Jewish Committee, which helped organize the caucus, was optimistic about Omar’s inclusion.

“This is a caucus of the House of Representatives, therefore membership is open to all members,” AJC director of media relations Kenneth Bandler said in a statement. “Hopefully, the caucus, as it plans its future activities, will sensitize Rep. Omar to the importance, history and achievements of Black-Jewish relations in our country. That would be the best possible outcome.”

Other co-founders of the caucus include Reps. John Lewis, an African-American Democrat from Georgia and civil rights icon; Debbie Wasserman Schultz, a Jewish Democrat from Florida and former chair of the Democratic National Committee; and Will Hurd, a Republican from Texas and one of two black GOP members of Congress.