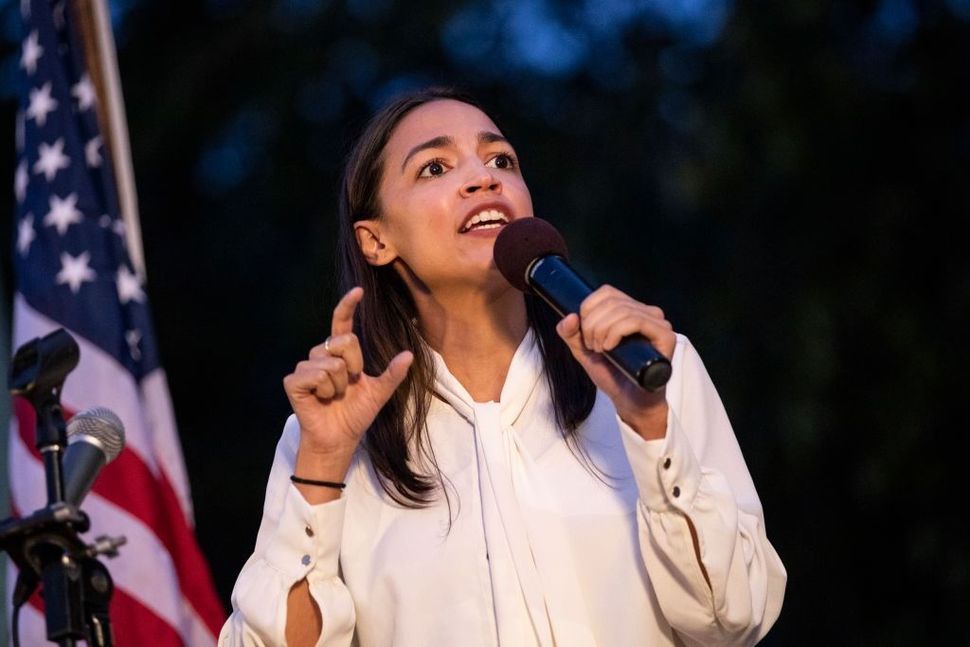 Rep. Alexandria Ocasio-Cortez speaks during a vigil in Brooklyn for the victims of the recent mass shootings in El Paso, Texas and Dayton, Ohio, August 5, 2019. Image by Drew Angerer/Getty Images

Rep. Alexandria Ocasio-Cortez announced Thursday that she would not travel to Israel in protest of the country’s decision to bar fellow Reps. Ilhan Omar and Rashida Tlaib from entry.

“Netanyahu’s discriminatory decision to ban members of Congress from Israel harms int’l diplomacy,” Ocasio-Cortez tweeted. “Visiting Israel & Palestine are key experiences towards a path to peace. Sadly, I cannot move forward w scheduling any visits to Israel until all members of Congress are allowed.”

Israel announced Thursday that they were invoking a law allowing them to ban supporters of the Boycott, Divestment and Sanctions (BDS) campaign against Israel.

Omar and Tlaib are the only two members of Congress who have said they personally support the campaign. But 14 other House Democrats, including Ocasio-Cortez, voted last month against a symbolic resolution condemning BDS, and Ocasio-Cortez is a co-sponsor of Omar’s competing resolution defending Americans’ right to boycott.

Ocasio-Cortez had been criticized by some Jewish groups during her primary campaign for saying that the Israeli army’s killing of Palestinians trying to breach the Gaza border was a “massacre.” Soon after her upset primary victory, she promised in a PBS interview to “learn and evolve on this issue.”

In December, her office told the Forward that she had “no plans” to go to Israel or anywhere else in the world.

Congressional delegations to Israel and the West Bank, usually organized by the pro-Israel lobby AIPAC, are common for new members of Congress. More than 40 House Democrats, many of them freshmen, participated in one such trip earlier this month.

Ocasio-Cortez, Omar and Tlaib are all members of the so-called “Squad,” a group of first-term, progressive Democratic congresswomen of color who have been the subject of racist invective from President Trump.