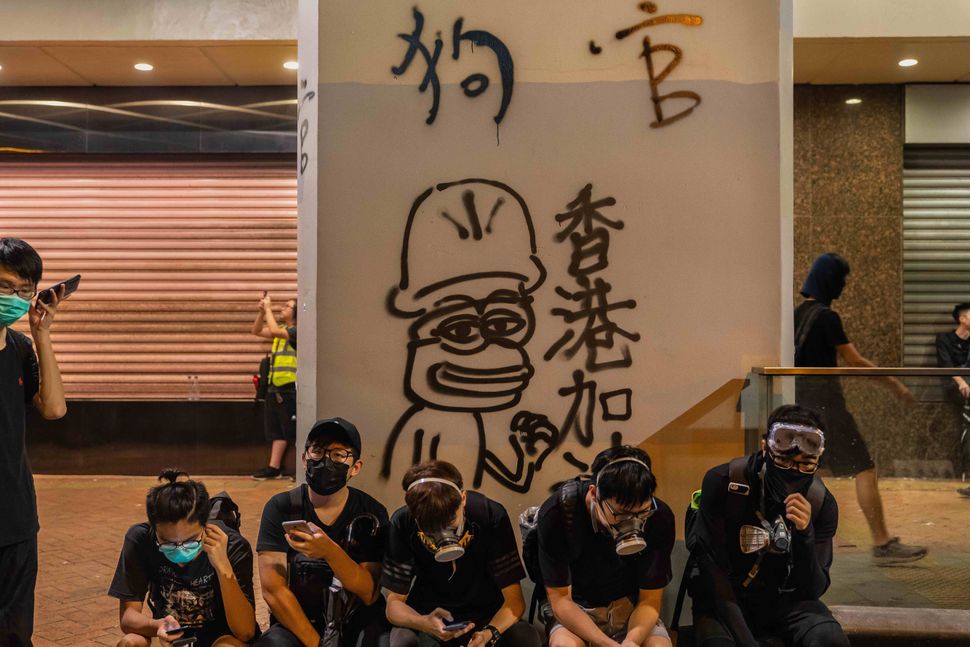 Pepe the Frog graffiti outside the Central Government complex in Hong Kong, August 18, 2019. Image by Getty

By the middle of the frenetic summer of 2016, the alt-right had become a term on everyone’s lips. The Forward published a list of must-know terms and symbols used by the alt-right for its cultural warfare on liberal ideals and racial diversity. At the bottom of that list: Pepe the Frog, an uncannily part-human-part-frog cartoon often used as a stand-in for Donald Trump, or depicted gassing Jews or shooting immigrants trying to cross the border.

That September, the Anti-Defamation League labeled Pepe a hate symbol.

Three years later, and Pepe has landed in Hong Kong amid a summer of pro-democracy protests. But Pepe isn’t there as a hate symbol: Rather, he is a kind-of mascot for the largely leaderless movement. Many protesters had no idea of Pepe’s fraught early career as an internet meme.

“It has nothing to do with the far-right ideology in the state,” one person wrote on an anonymous forum used by protesters. “It just looks funny and captures the hearts of so many youngsters. It is a symbol of youth participation in this movement.”

Pepe has become a protester. A pack of special emojis for Telegram, the secure messaging service, features Pepe in a yellow hardhat, similar to the one worn by many protesters. He has also been depicted as a journalist, with “PRESS” written on his hat, and a first-aid worker.

“To me, Pepe is just a Hello Kitty-like character,” Mari Law, a protester, told the Times.

Pepe had rosier origins, as well. He was created as a simple internet cartoon character. In 2017, Pepe’s creator, Matt Furie, symbolically killed off Pepe in a comic strip, as a protest against Pepe’s appropriation by the far right. Furie and the ADL had tried to team up to #SavePepe with a failed social media campaign.

“I think we can redefine Pepe in this movement,” Law said.