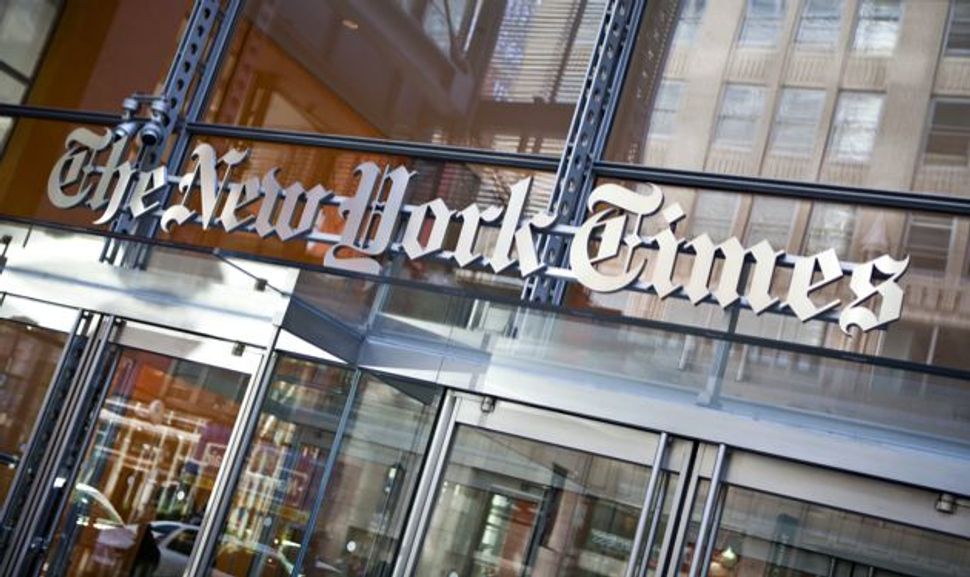 An editor at The New York Times has apologized for having written several anti-Semitic and racist tweets.

Tom Wright-Piersanti is a senior staff editor at the Times, according to his LinkedIn profile. In the years 2008-2010, Wright-Piersanti wrote several offensive tweets, which were first uncovered by the right-wing website Breitbart.

On New Years’ Day 2010, Wright-Piersanti tweeted, “I was going to say ‘Crappy Jew Year,’ but one of my resolutions is to be less anti-Semitic. So… HAPPY Jew Year. You Jews.”

The previous month, during the Jewish holiday of Chanukah, Wright-Piersanti shared a picture of a car with a lit menorah on its roof and wrote, “Who called the Jew-police?”

“I have deleted tweets from a decade ago that are offensive,” Wright-Piersanti tweeted after the Breitbart article was published. “I am deeply sorry.”

The tweets referencing Jews were indeed deleted after Breitbart published its article, but other racially offensive ones are still visible. “There are four indian guys with mohawks in this one class, and each one is a douche in his own awful way. I hate mohawk Indians,” Wright-Piersanti wrote, also in December 2009. “I don’t hate Mohawk Indians, though. I love those guys. I just hate Indians with mohawks. Different indians, different mohawks,” he wrote a few minutes later.

And in November 2009, he tweeted, “Two high-voiced indian guys keep calling each other ‘dawg’ and they aren’t doing it as a joke. Fuck THAT shit.”

The New York Times said it was investigating. “We are aware of these tweets, which are a clear violation of our standards,” Times spokeswoman Danielle Rhoades Ha told the Forward by email. “We are reviewing next steps.” (Full disclosure: Jodi Rudoren, who will begin her role as editor-in-chief of the Forward next month, is currently a Times employee.)

Wright-Piersanti did not respond to a request for comment by publication time. Many of the tweets were written while he was in college, according to his LinkedIn timeline, which states that he graduated from Rutgers University in 2009 and began working for the Times in 2014.

Ironically, one of the figures that Breitbart turned to for comment in their article was former White House adviser Sebastian Gorka. “Since Walter Duranty’s apologia for the murderous Soviet regime, to the rank anti-Semitic cartoons of 2019, the New York Times has become a cess-pit of hatred and bigotry,” Gorka said.

The Forward exclusively revealed in 2017 that Gorka had decades-long associations with a Hungarian group that had allied with the Nazis during World War II.

The Times apologized in April for publishing an anti-Semitic cartoon in its international print edition.

This is the second time this month that the Times has had to deal with controversy regarding one of their employees’ tweets. The newspaper demoted deputy Washington editor Jonathan Weisman, who is Jewish, earlier this month after he wrote a series of racist tweets over the preceding two months.