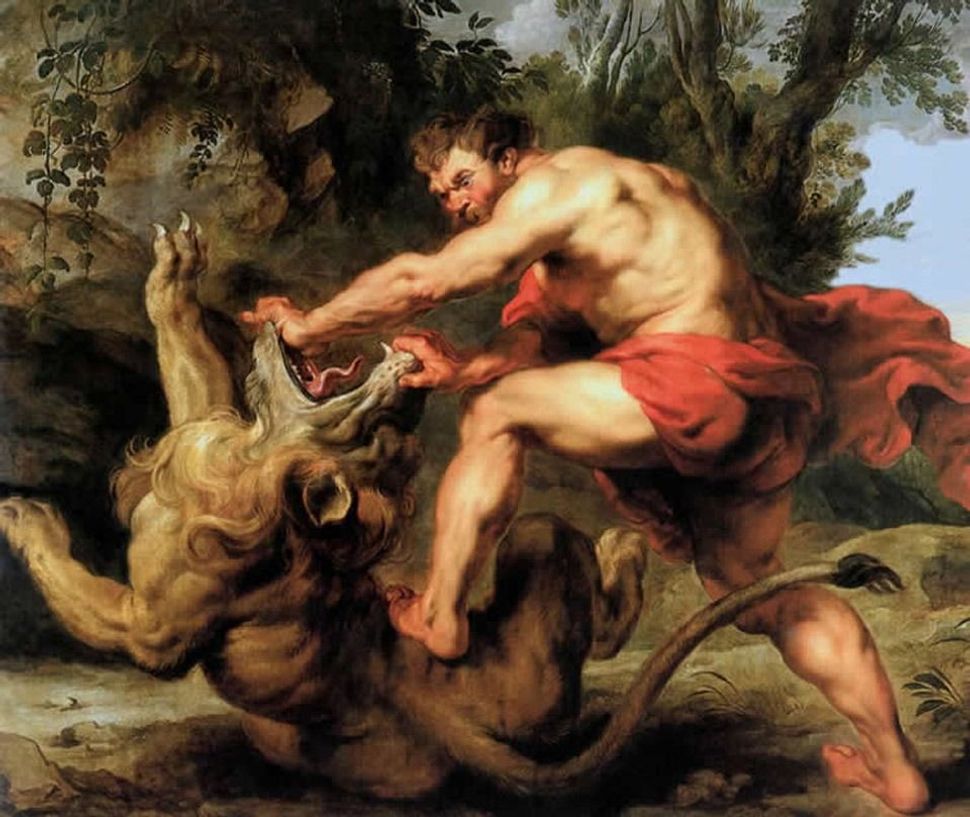 A painting of the biblical “judge” Samson, by the Flemish painter Peter Paul Reubens. Image by Wikimedia

On Thursday afternoon, BuzzFeed News reported that the Department of Justice had sent a routine email to a large group of DOJ staff that contained a link to a blog post from VDARE, an online haven for white nationalist, anti-immigrant and racist pseudo-intellectuals.

In response, Ashley Tabbador, head of the union the National Association of Immigration Judges, wrote a letter to the DOJ, saying that the post’s inclusion in the email was a violation of the DOJ’s “ethical standards and legal principals.”

The blog post in question referred to American judges as “kritarchs,” as do many other posts on VDARE. The term, used in “a negative tone,” Tabaddor wrote, “is deeply offensive and Anti-Semitic.” The term, she wrote, is a reference to Ancient Israel, and specifically to the period described in the Hebrew Bible’s Book of Judges, when the leaders of the loosely confederated tribes of the people of Israel, who served as the de facto arbiters of law, were called “judges.” Kritís means “judge” in Greek, and the suffix “-arch” means “rule,” so “kritarchy” means “rule of judges.”

“VDare’s use of the term in a pejorative manner casts Jewish history in a negative light as an Anti-Semitic trope of Jews seeking power and control,” Tabaddor wrote.

The story was widely picked up by media outlets, including the Forward. Most took it for granted that the term “kritarch” was anti-Semitic, while many Jews on social media noted how unique it was to be informed of an anti-Semitic term that they had never heard of.

But the history of the term is obscure. While two Bible scholars who spoke with the Forward confirmed that the term appears to be Greek, neither had heard the term before. (Both suggested that omission was possibly due to the fact that they were not scholars of Greek.) The Forward was not able to reach further academic experts despite dozens of calls and emails. (It’s August.) The word “kritarchy” has a few references, mostly legal and not biblical in nature, on Google Scholar, and is found in “The Big Book Of Words You Should Know To Sound Smart” (2015) and an early 20th-century edition of Webster’s.

Tabaddor, when reached by the Forward, declined to comment.

Webster’s gives an example of the use of “kritarchy” taken from a book by the 19th century Romantic poet Robert Southey, which was the earliest usage of the term that the Forward could locate. “And very possibly there may be German professors of Divinity who in like manner trace the Jewish history before Samuel to the Lays of Samson, Jephthah, Gideon and other heroes of the Kitrarchy, of Joshua, and of Moses, and so of the Patriarchs upwards,” Southey wrote.

So: How did this word really get from Southey to VDARE?

The first usage of the word on VDARE’s site is in their publication of a column by the supply-side — i.e., lower-taxes-and-fewer-regulations — economist Paul Craig Roberts. In 1995, Roberts co-authored a book about the 1954 Supreme Court decision Brown v. Board of Education, which attempted to desegregate American schools. Roberts argued that this was judicial overreach. And in 2004, VDARE published a column of his entitled it “Fifty Years Of Brown: The Age Of Kritarchy.”

When I reached Roberts by phone he said to remembered neither the column nor the term. He guessed that perhaps his co-author on the book had used the term, and that he had repurposed text from the book for the column.

Roberts said that VDARE had stopped publishing his columns because they felt that he “didn’t write about immigration enough.”

The apparent next use of the term “kritarch” on the site was in 2010, after which the term continued to appear with moderate regularity. Other far-right blogs, including The New American, have also occasionally used the term. On VDARE “kritarch” is used as something of a nose-thumbing substitute for “judge.” Given that the site, which habitually pushes un-scientific theories about some races’ superiority over others, has published authors who subscribe to anti-Semitic theories that claim that Jews are on Earth to undermine Christian values, it is not inconceivable that an ironic reference to a form of government described in the Old Testament, or Hebrew bible, would be meant as a jab at the Jews.

Per BuzzFeed, a former official with the Department of Justice responded to Tabaddor’s letter by stating that the email briefing in which the link was included is created by a contractor and “is not reviewed or approved by staff before it is transmitted.”

News of the link’s inclusion came at the tail end of a week in which President Trump drew controversy over his statement that “Any Jewish people that vote for a Democrat — I think it shows either a total lack of knowledge or great disloyalty,” and, in response to the outcry, said the statement was “only anti-Semitic in your head.”