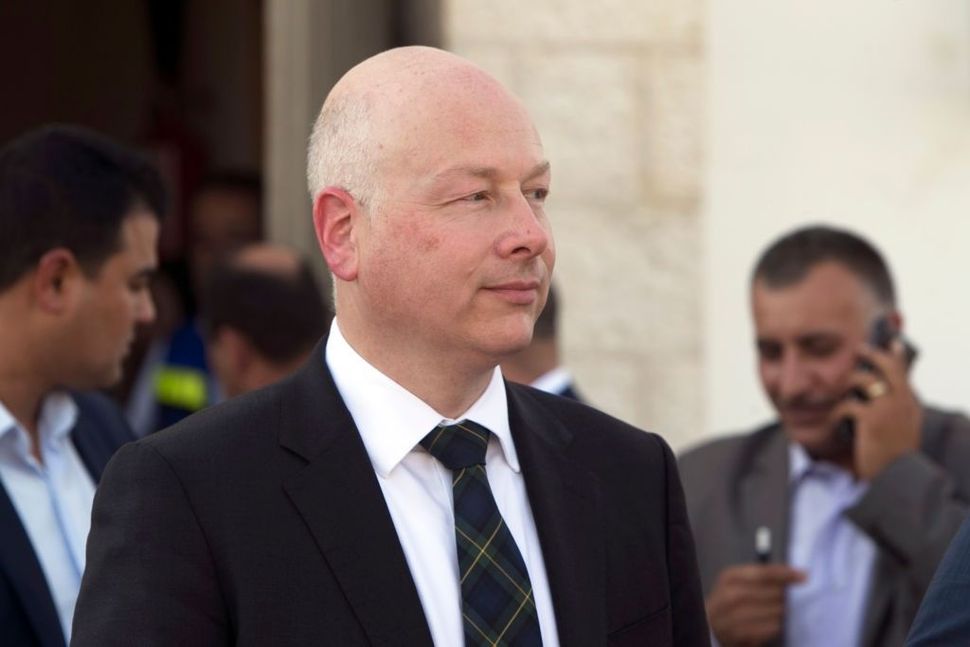 US special envoy Jason Greenblatt attends the launch of a project to improve access to wastewater treatment and water for Palestinian farmers, October 15, 2017, in Jericho, the West Bank. Image by JAAFAR ASHTIYEH/AFP/Getty Images

Jason Greenblatt, President Trump’s special envoy to the Middle East and a key figure in the administration’s work on an Israeli-Palestinian peace plan, has announced his resignation.

The White House announced Thursday that Greenblatt will leave his post in the coming weeks, after working on the Middle East issue for over two years.

According to administration sources, Greenblatt originally planned to leave the administration after two years, and ended up staying in office longer.

The administration stressed that his departure should not impact its intention to release its Middle East peace plan after Israel’s September 17 election.

The economic part of the plan was released in June ahead of an international summit in Bahrain.

The release date of the plan has been delayed several times over the past year, most notably after Prime Minister Benjamin Netanyahu failed to secure a majority coalition after Israel’s April election, forcing the country into a new election.

The U.S. administration has yet to announce an official date for the plan’s publication. Washington insists it would benefit both parties, but the Palestinian leadership has repeatedly called it biased and said it would not accept it.

Greenblatt said Thursday he is “incredibly grateful to have been part of a team that drafted a vision for peace. This vision has the potential to vastly improve the lives of millions of Israelis, Palestinians and others in the region.” This is the second time in recent days that Greenblatt has referred to the U.S. document as a “vision.”

He also said he is looking forward to spending more time with his family, which remained in New Jersey during the two-and-a-half-year period he worked in the White House.

Trump’s son-in-law and White House senior adviser Jared Kushner said that Greenblatt’s work for the administration “helped develop the relationships between Israel and its neighbors,” and that Greenblatt is “trusted and respected by all of the leaders throughout the region.”

Greenblatt was Trump’s personal lawyer for years before joining the administration following his election victory in 2016. He plans to resume his career as an attorney in New York.

It remains unclear whether a permanent Middle East envoy will be appointed in his place, but Kushner, his closest aide Avi Berkowitz and U.S. Ambassador to Israel David Friedman will continue to lead the American peace efforts.

Berkowitz, as well as the State Department’s top representative for Iran-related policy, Brian Hook, will take on a larger role in the Middle East peace team.

In July, Greenblatt said a peace agreement between Israel and the Palestinians would be the Iranian regime’s “worst nightmare,” in an opinion piece published by Fox News.

“A successful comprehensive peace agreement between Israel and the Palestinians is among the important tools we have to help bring regional stability and prevent Iranian terror,” Greenblatt wrote in the opinion piece that was co-authored by Hook.

“The Iranian regime’s regional aggression has brought the Arab nations and Israel together to an unprecedented degree, creating cooperation that can ultimately help advance diplomatic progress in other areas, including peace efforts between Israel and the Palestinians. The Israeli-Palestinian conflict is no longer — if it ever was — the core conflict of the region,” Greenblatt and Hook wrote.