Who Were The Two Bystanders Killed By Thwarted Synagogue Shooter In Halle? 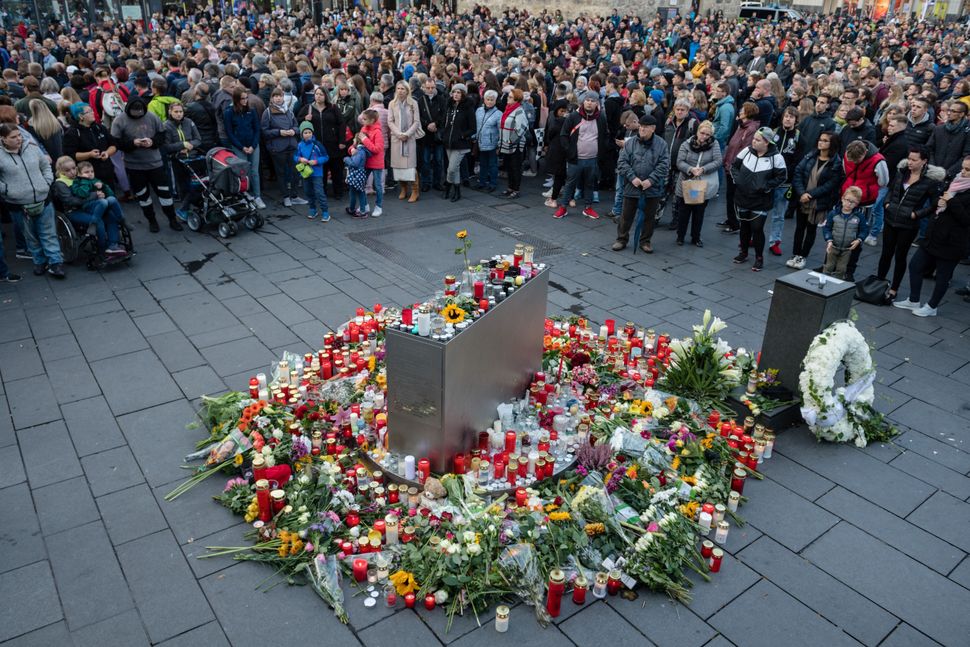 A makeshift memorial for the two victims of the Halle synagogue shooting in Germany. Image by Getty

The man who tried to kill Jews at prayer over Yom Kippur in Halle, Germany, was unable to enter the synagogue: It was locked. So the man, an avowed white nationalist, turned his gun on bystanders, killing two people.

The two victims of the #Halle attack on Yom Kippur have been identified as 40-year-old Jana Lange and 20-year-old Kevin S. They were gunned down by the shooter after he failed to break into the synagogue; innocent victims of racism and hatred. May their memory be a blessing. pic.twitter.com/ToZ4yQFQTB

Lange was killed after she criticized the shooter for making a lot of noise.

“Is that really necessary while I’m walking past here?” she said, according to the Daily Mail.

Lange was remembered as an avid music fan and was known in Germany’s music scene for her warmth and dedication, according to news reports. She could not work due to a disability.

“The rampage in Halle has taken our most loyal fan from us,” Stefan Mross, one of Lange’s favorite artists, wrote in a social media post. He added that she had “a zest for life.”

Kevin S. was shot at a Doner kebab shop near a construction site where he was working. He was a supporter of Hallescher FC, a local soccer club.

After news of the rampage began to filter out, Kevin’s father posted on Facebook, concerned that he had not heard from his son, who he knew was in the area.

“All we know is that you were close to the construction site and lost your phone,” he wrote. “Kevin, we love you over everything else.”

“He had his whole life ahead of him. He was only 20 years old,” his mother told reporters. “I don’t know how my life is supposed to carry on.”

She reportedly watched the footage that the shooter had live-streamed of her son being shot to death as he ate his lunch.

Who Were The Two Bystanders Killed By Thwarted Synagogue Shooter In Halle?