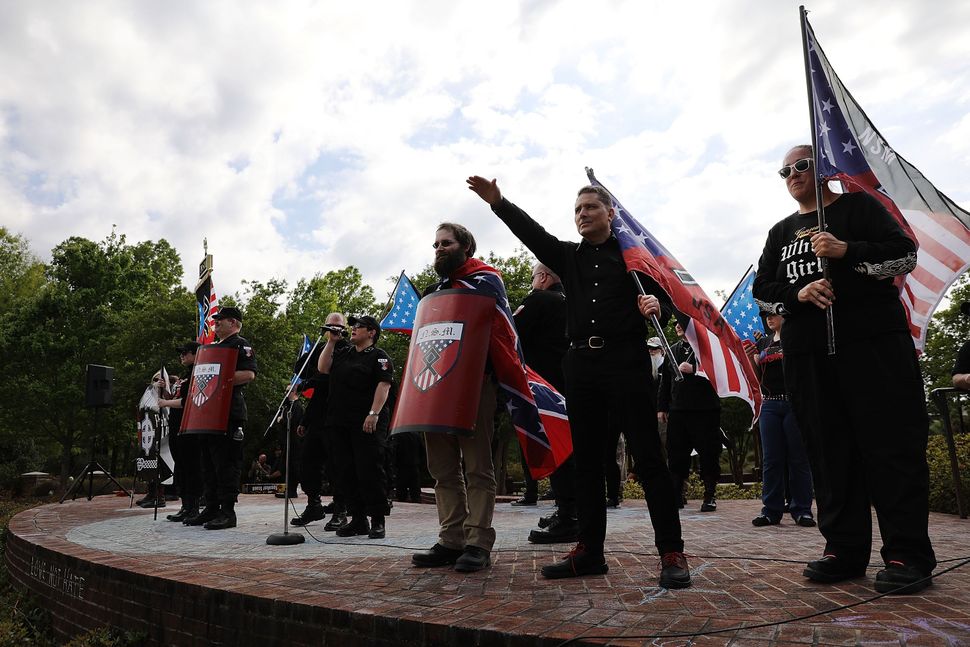 Members and supporters of the National Socialist Movement, one of the largest neo-Nazi groups in the US, hold a rally on April 21, 2018 in Newnan, Georgia. Image by Getty

Neo-Nazis considered to be domestic terrorism threats by the U.S. government are increasingly communicating and meeting with European hate groups, the director of the Federal Bureau of Investigation, Christopher Wray, told Congress Wednesday.

Speaking to the House Homeland Security Committee, Wray said that these meetings did not appear to be about organizing terrorist actions, but more about sharing their like-minded views.

“We are starting to see racially motivated violent extremists connecting with like-minded individuals online certainly, and in some instances, we have seen people travel overseas to train,” he said, particularly to Ukraine.

“Probably a more prevalent phenomenon that we see right now is racially motivated violent extremists who are inspired by what they see overseas,” he added. “They’re not working together, but they’re just fueled by each other.”

Wray noted that the lack of structure makes it difficult for law enforcement to determine how serious some of the groups are about committing acts of terrorism.

During the hearing, Rep. Max Rose, a Jewish Democratic Congressman representing Staten Island and a section of Brooklyn, asked if the FBI could more effectively monitor certain American neo-Nazi groups if the Ukrainian hate groups they communicated with were registered as foreign terrorist organizations. Wray said that the designation would be up to the State Department.