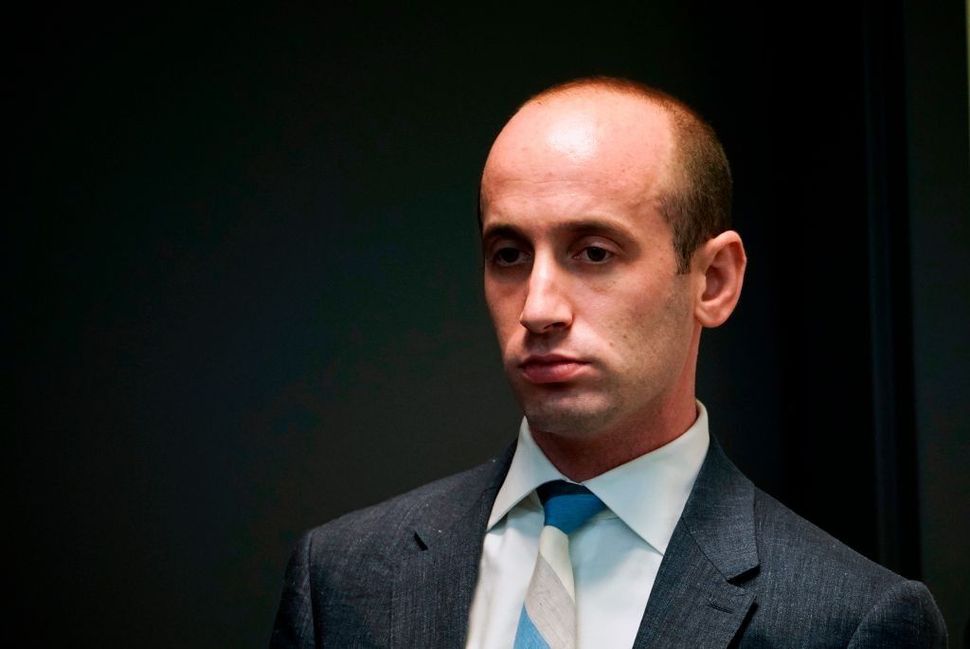 Senior Advisor to the president Stephen Miller is seen during an immigration event with President Donald Trump, June 22, 2018 in Washington, DC. Image by MANDEL NGAN/AFP via Getty Images

Many of the 900 emails sent from March 2015 to June 2016 “showcase the extremist, anti-immigrant ideology that undergirds the policies he has helped create as an architect of Donald Trump’s presidency,” according to a report on the website of the Southern Poverty Law Center.

More than 80 percent of the emails relate to race or immigration, according to the report. Miller, who is Jewish and a hardliner on immigration — his ancestors were immigrants to the U.S. — did not write sympathetically or neutrally at all about nonwhite or foreign-born people.

Miller, who recently became engaged to a Jewish woman, also sent McHugh links to VDare, a news website popular with white nationalists, and recommended that she read “The Camp of the Saints,” a racist French novel by Jean Raspail from the 1970s that has become an ideological foundation document for white nationalists.

Breitbart fired McHugh in 2017 after she posted anti-Muslim tweets. She later renounced the far right.

Miller also railed against the removal of Confederate monuments and flags after a white nationalist, Dylann Roof, opened fire at a South Carolina church and killed nine worshippers.

Before entering politics, Miller was in contact with Peter Brimelow, the founder of VDare, and white nationalist Richard Spencer when he and Spencer were undergraduates at Duke University.

Miller is engaged to Katie Waldman, the 34-year-old press secretary for Vice President Mike Pence. Waldman’s Jewish immigrant ancestors came to America at the turn of the 20th century.