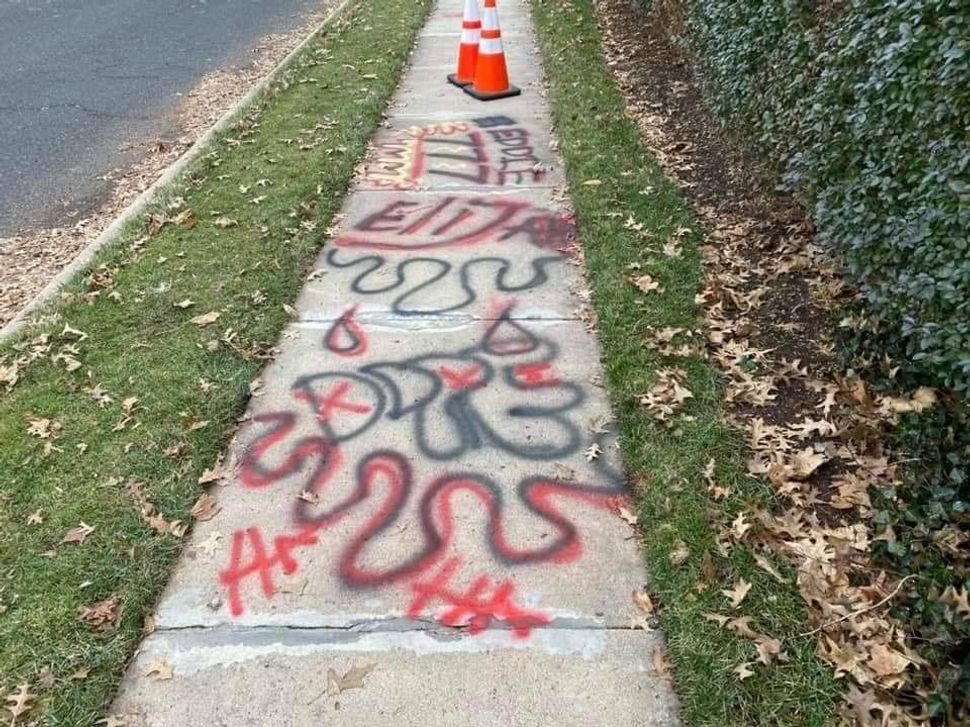 Late Saturday night, hours after the stabbing of five in a Hasidic neighborhood in Monsey, N.Y. a New Jersey resident discovered graffiti near an Orthodox synagogue in the borough of Highland Park. Now, two teens have been charged with five counts of criminal mischief for the vandalism. Absent from the charges is a hate crime, as the two are alleged to have acted without the intent of targeting Jews.

“At this point and time, there is absolutely no indication of a bias intent on the part of the young people that were involved,” said acting Middlesex County Prosecutor Christopher Kuberiet during a December 30 anti-hate meeting, according to News 12 New Jersey.

Highland Park Police Chief Rick Abrams and Kuberiet announced the charges at the community meeting, “Highland Park Stronger Than Hate,” prompted by the graffiti, My Central New Jersey reported. The names of the perpetrators were not released due to their age.

The graffiti was reported around 11:15 p.m. Saturday on the sidewalk and trees outside Congregation Ahavas Achim, which stands within the boundaries of Highland Park’s Eruv.

“A lot of members of the congregation and the community were very alarmed by the incident in Monsey and the graffiti at the synagogue,” Harry Glazer, the shul’s security chair told My Central New Jersey.

Following the news of the graffiti Highland Park Mayor Gayle Brill Mittler announced the formation of a “Community Response Team” made up of religious leaders, advisors and first responders to tackle bias crimes in a post on Facebook.

While a bias crime was ruled out for the two teens, one male and one female, Kuberiet assured the roughly 200 residents gathered for the anti-hate meeting that the youths responsible, “will know the impact their crime had on this community.”