Board member resigns from YIVO amid fallout over library layoffs 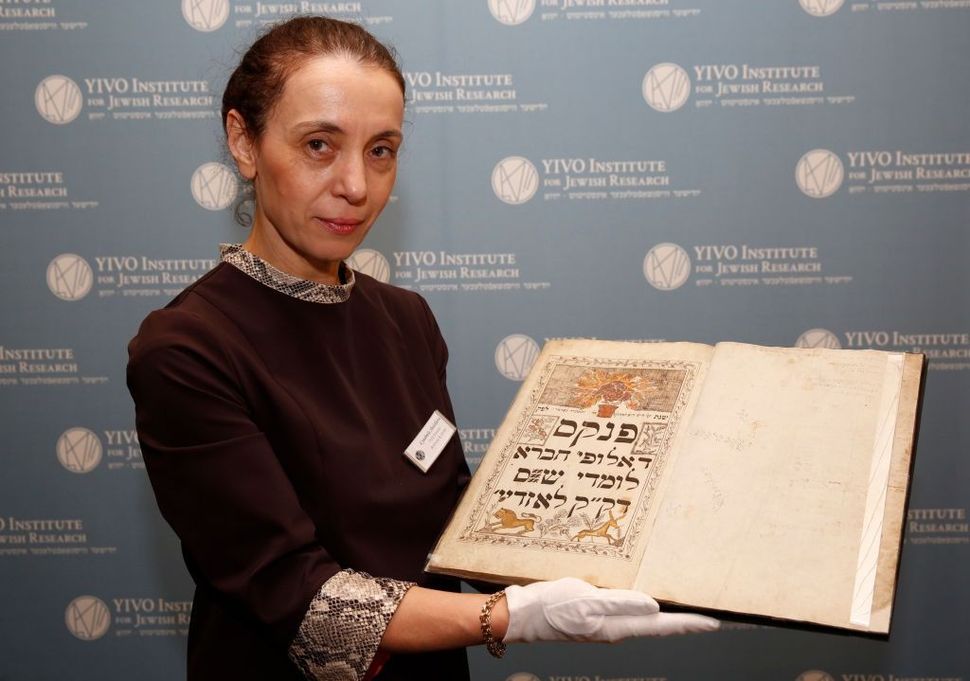 Lyudmila Sholokhova, YIVO’s former head librarian, unveils documents thought to have been destroyed during the Holocaust at an event on October 24, 2017 in New York City. Image by Thos Robinson/Getty Images for YIVO Institute for Jewish Research

A member of the board of directors of the YIVO Institute for Jewish Research has resigned, and another has been removed from the organization’s website, amid controversy over the organization’s decision to lay off its library staff.

YIVO, the world’s preeminent center for the study of Yiddish and its history and culture, laid off all four of its librarians last month in order, they claimed, to mitigate a $550,000 budget shortfall. YIVO executive director and CEO Jonathan Brent said in a statement on January 20 that the decision had been made “with the full support of the executive committee of the YIVO Board.”

But board member Karen Underhill resigned after the layoffs were announced. Underhill declined to be interviewed, but told the Forward in an email that while she remained “deeply committed” to YIVO, she stepped down from the board “in connection with YIVO’s handling of the librarian firings, and with its choice of how to respond to the concerns of the scholarly community.”

In the two days after the Forward broke the news of the layoffs on January 20, more than 1,000 people, including some of the world’s most distinguished scholars of Jewish and Yiddish studies, signed an open letter protesting the decision.

The following week, YIVO published a letter in response, written on behalf of the board by chair Ruth Levine and vice chair Irene Pletka, saying that said that they hope to raise money to restaff its library, and that its staff of archivists, who were not affected by the layoffs, will also run the library until dedicated librarians can be hired. (Levine and Pletka are Forward donors, and Pletka is a member of the Forward Association, the Forward’s governing body.)

Underhill and another YIVO board member, Stuart Schear, are no longer listed as board members on YIVO’s website. They were included as recently as January 27 — five days after the open letter was published. Schear did not respond to numerous requests for comment.

Brent declined to comment and directed questions about the board to Levine, who did not respond to multiple requests for comment.

YIVO’s library, which contains 400,000 books, newspapers and other publications, is separate from its archive, which contains 23 million items. YIVO and the Forward, the oldest Yiddish-language American news organization still in operation, have a decades-long institutional relationship. Forward president Samuel Norich previously worked as YIVO’s executive director, YIVO board members Jake Morowitz and Edward Blank are also on the Forward board of directors, and the two not-for-profits share many of the same supporters.

Board member resigns from YIVO amid fallout over library layoffs