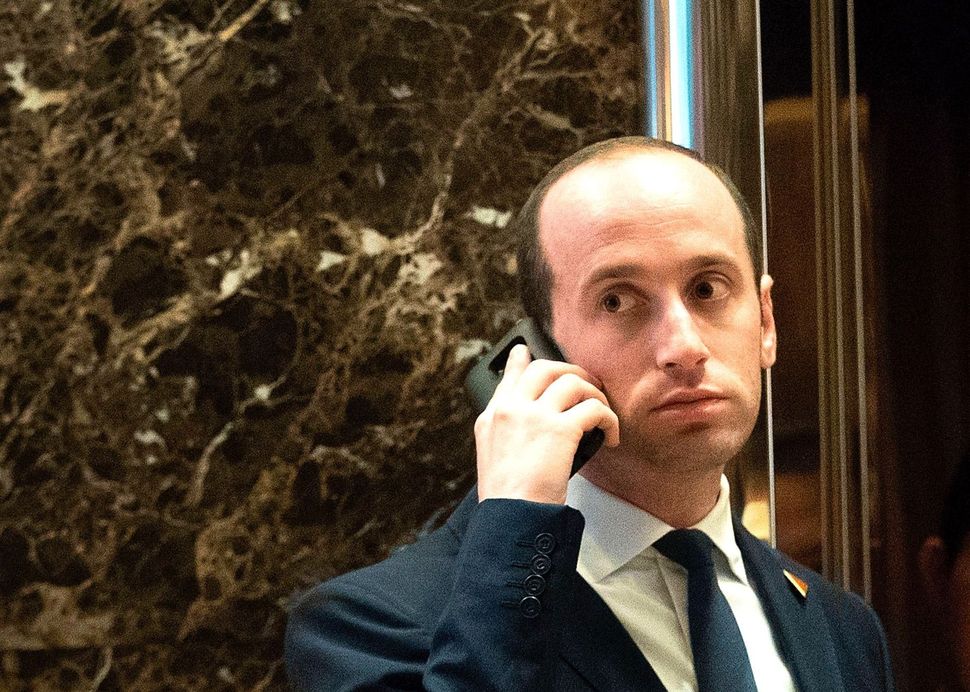 Liberal Jews on Twitter are tweeting a credo of the moment: Stephen Miller, a top aide to Donald Trump and the force behind some of his most exclusionary immigration efforts, is a white nationalist.

The tweets came in response to one from Joel Pollak, a writer for the conservative media site Breitbart, who was himself responding to a tweet from Rep. Ilhan Omar. Omar tweeted her conviction that Miller is a white nationalist, linking to an article from 2019 about his role in picking a “tougher” head of Immigration and Customs Enforcement.

Steve Miller is a Jew. An American Jew. A patriot. Not a “white nationalist.”

I don’t believe you should be calling a Jew anything, Ms. Omar. https://t.co/3WPaL2U2R6

Pollak’s tweet, which was “liked” thousands of times, received a flurry of responses from Jews mentioning their Jewish bona fides and declaring that Stephen Miller is a white nationalist.

Another Rabbi here Stephen Miller is a White nationalist and he’s Jewish. Unfortunately both can be true at the same time.

Son of a man who escaped the Nazis but who lost three dozen members of his family to the Holocaust. Stephen Miller is a white nationalist.

I would also add that @IlhanMN is serving her country even as Mr. Miller is working to diminish it.

Stephen Miller promoted white nationalist materials and ideas to Breitbart during Trump’s 2016 presidential campaign, leaked emails from Miller’s account show. The hundreds of emails, obtained by the Southern Poverty Law Center, “showcase the extremist, anti-immigrant ideology that undergirds the policies he has helped create as an architect of Donald Trump’s presidency,” the Center wrote in its corresponding report.

Miller, in pushing back against allegations that he is a white nationalist or a white supremacist, has suggested that the allegations are anti-Semitic, similar to the implication in Pollak’s tweet.

“It is an attempt on the part of the Democratic Party to attack and demonize a Jewish staffer,” Miller said after the release of the SPLC report. “And make no mistake, there is a deep vein of anti-Semitism that is running through today’s Democratic Party.”

Miller has come under scorn from his Jewish relatives, who have noted that his great-grandparents were themselves immigrants who succeeded in the so-called American dream.