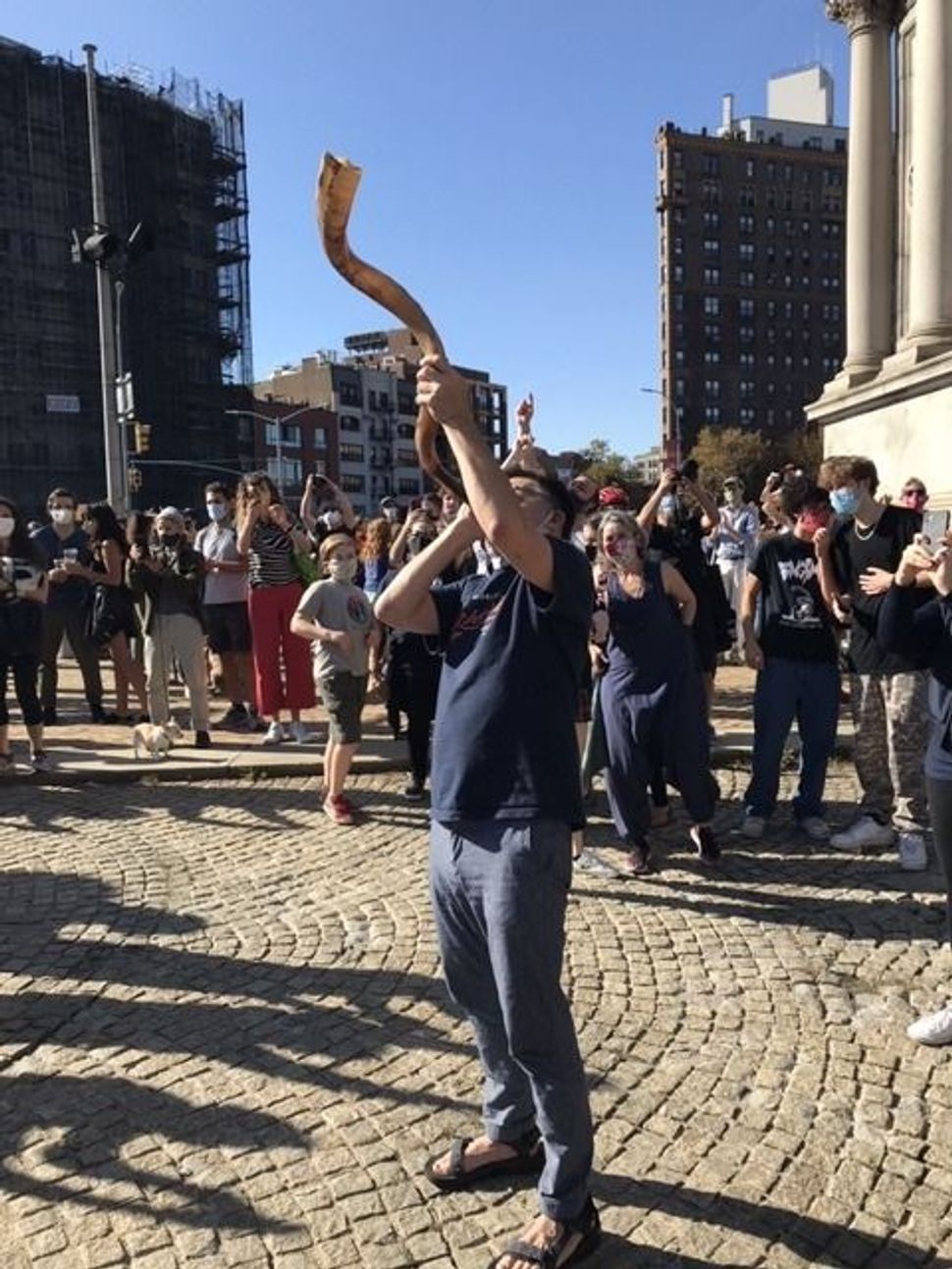 The announcement by several national publications on Saturday that Joe Biden was the presumptive winner of the 2020 presidential election triggered a joyful, Jewish-inflected gathering at Grand Army Plaza, a civil war memorial that has served as a site of protest in recent months. 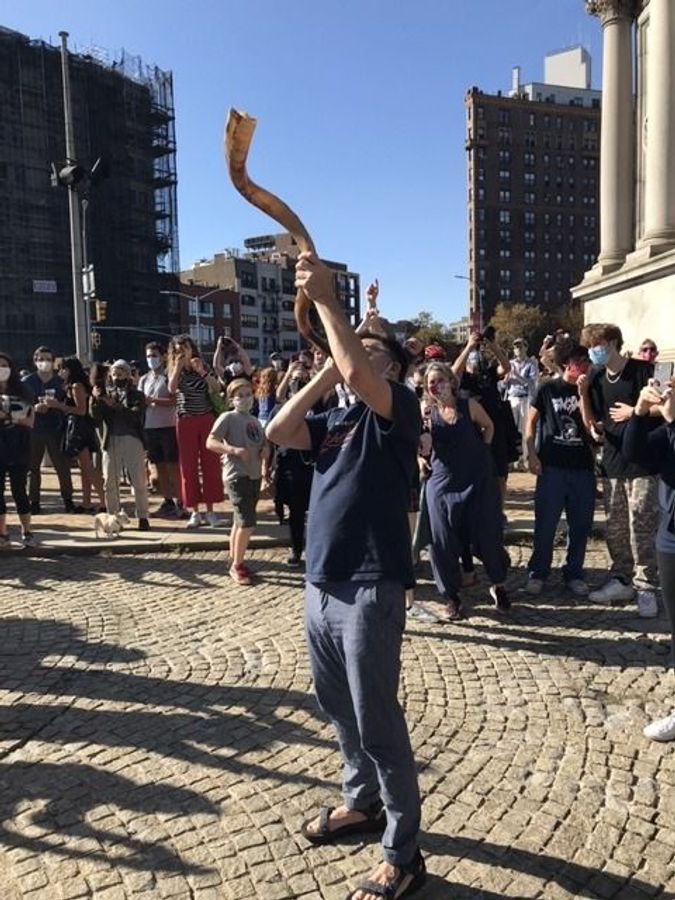 The spontaneous party drew drew Sen. Charles Schumer, a shofar-blowing rabbi and ecstatic Jewish millennials as well as countless drummers, dancers and much champagne — both drunk and sprayed over a screaming crowd.

“I came out to blow the shofar because it feels like the walls of Jericho are coming down,” said Rabbi Andy Bachman, who has held several high-profile positions in the Jewish community, including as spiritual leader of the Reform synagogue Congregation Beth Elohim, just blocks away from Grand Army Plaza. The shofar, he added, is blown on Rosh Hashanah to remind Jews that there is a God of justice.

Bachman blew the shofar several times, serving as one of the focal points of the gathering. He evoked the deceased Congressman and civil rights leader John Lewis, and led the crowd in shouting the name of Ruth Bader Ginsburg, the Supreme Court justice who died in September — on the first night of Rosh Hashanah. 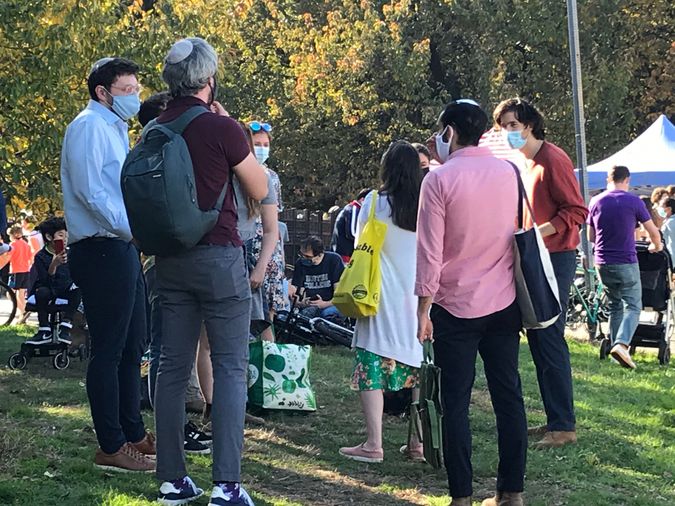 At one point, Ali Berkowitz, 25, stepped into the center of the circle, twirling a gay rights flag over her head. Biden’s victory, she said, was a monumental step in revitalizing American democracy.

The crowd also flocked to Schumer, who lives just blocks away, when he briefly appeared. The neighborhood, home to many of his most progressive constituents, has often gathered in the plaza and in front of his building to protest policy decisions they’ve seen as disappointing. But on Saturday, they chanted his nickname — “Chuck! Chuck! Chuck!” — and asked his security detail if he’d be available for selfies. 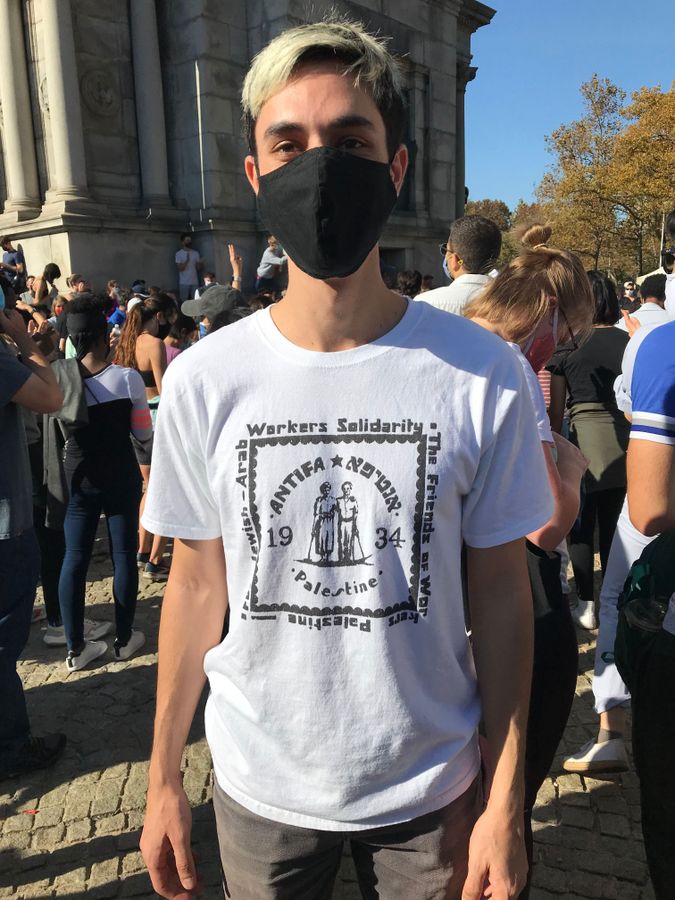 Elon Rov, 27, wears a shirt that says “Antifa” in Yiddish to celebrate the announcement of Joe Biden as the presumed winner of the 2020 presidential election. Image by Helen Chernikoff

To the side stood Elon Rov, 27, who when he heard the news put on a T-shirt bearing the symbol of a Jewish-Arab antifa group that was active in pre-state Israel. “It’s about my community’s struggle for progress and justice,” he said of the shirt.

And across the street — all over the park — were scattered groups of Jews celebrating Shabbat as they always do in good weather, with picnics, blankets and blessings.