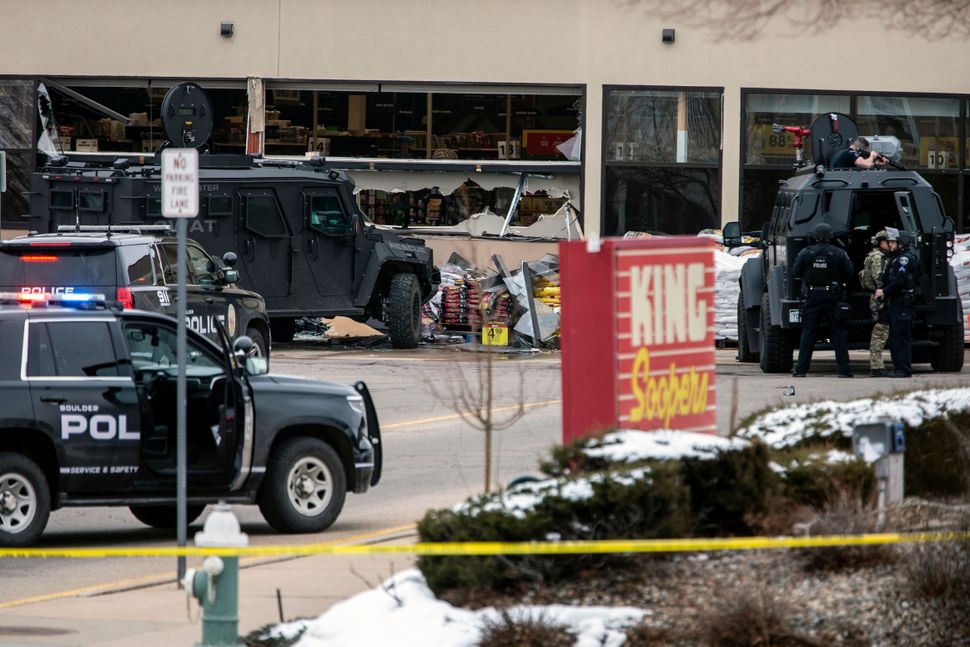 Smashed windows are left at the scene after a gunman opened fire at a King Sooper’s grocery store on March 22, 2021 in Boulder, Colorado. Image by Chet Strange/Getty Images

The Boulder Jewish community is coming together to grieve the 10 lives lost in the devastating mass shooting that took place in a Boulder supermarket on Monday.

The Boulder JCC will host “Coming Together as a Community ,” a virtual gathering of synagogues, Haver (Boulder’s Rabbinic Council), and the Boulder JCC to mourn the victims and connect with the greater Boulder community.

On Monday afternoon, a 21-year-old gunman opened fire in King Soopers, one of the most popular supermarkets for residents and university students in the immediate Boulder area.

Police officers exchanged fire with the shooter before taking him into custody less than an hour after receiving 911 calls.

Among the victims were a King Soopers store manager and Eric Talley, a Boulder police officer. Police released a full list of the victims on Tuesday morning.

“Our hearts and thoughts are with the families of the victims, law enforcement and first responders, and the entire Boulder community,” Boulder JCC executive director, Jonathan Lev, told the Forward. “We’ve all experienced such incredible loss. We are heartbroken, and we are grieving.”

The one-hour virtual event taking place at 7pm MST on Tuesday will include rabbis, singers, and musicians from congregations in the Boulder area who will share prayers and thoughts to mourn the victims and recognize the heroic acts of Boulder law enforcement. The JCC’s partners at the Islamic Center of Boulder and a number of other faith leaders and communities will also be present, according to Lev.

The event is open to anyone locally, nationally or internationally who is impacted by the shooting, or wants to show support for the Boulder community.

As of Tuesday morning, the man connected with the shooting has been charged with 10 counts of first-degree murder. The motive has not been identified and the investigation is ongoing.

“This is just the start of what will be a long process of healing,” Lev said.

Registration for “Coming Together as a Community” can be found here.