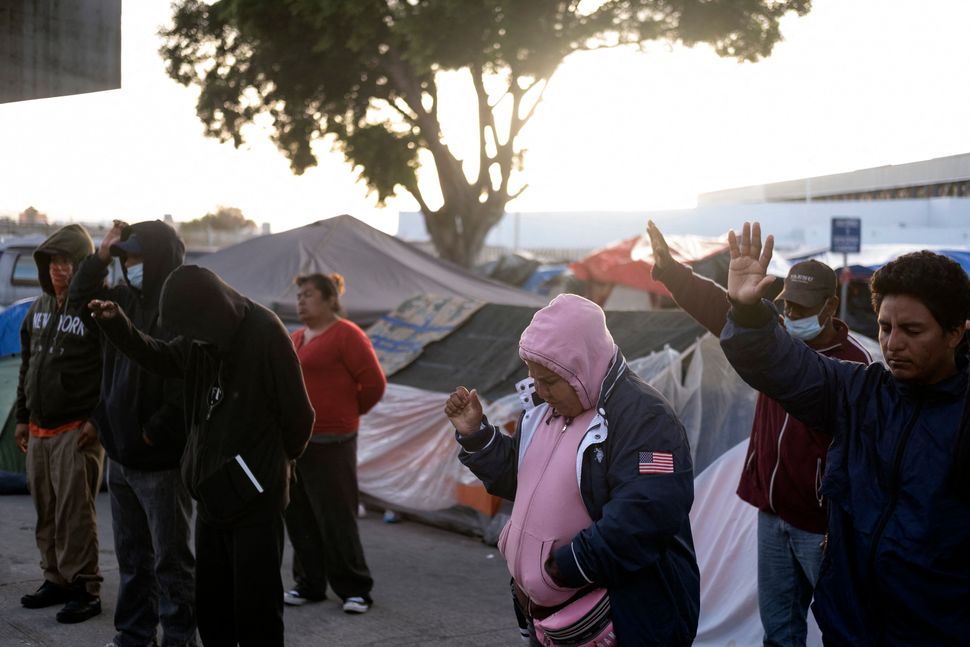 People pray during a street service near an improvised migrants and asylum seekers camp outside El Chaparral crossing port. By GUILLERMO ARIAS/Getty Images

(JTA) — Three weeks after taking office, Joe Biden announced that he would quadruple the number of refugees allowed into the United States.

For HIAS, it seemed like an answered prayer, as the Jewish refugee aid agency had endured a rough four years under Biden’s predecessor, Donald Trump.

HIAS, which once focused on resettling refugees, had confronted the first president since World War II who demonized refugees and then temporarily banned them from the United States. The gunman who killed 11 Jews at a Pittsburgh synagogue condemned HIAS by name shortly before the massacre.

So HIAS was excited for Biden, who spoke of America’s duty to be a compassionate and welcoming country. Biden’s promise on Feb. 12 to let in 62,500 refugees in 2021 seemed to be a fulfillment of that rhetoric. Trump had set the cap for fiscal year 2021 at 15,000.

And then nothing happened. Two months went by in which Biden did not actually raise the limit on refugees above 15,000, and would not say why, despite the prodding of HIAS and other refugee resettlers. More than 700 refugees who had received plane tickets based on Biden’s February promise had to cancel their flights, according to HIAS.

On Friday, Biden made it official: He would not be raising the cap on refugees above the limit set by Trump, though he would let in refugees from a wider range of countries in Africa and the Middle East. Later in the day, following pushback from activists, the White House said it would raise the cap in a month, by May 15.

“We’re relieved but disappointed,” said HIAS CEO Mark Hetfield following Friday’s initial announcement that the cap, also known as the refugee ceiling, would not be raised.

Following the second statement, Hetfield added, “There’s no reason to delay raising the refugee ceiling. It’s just a ceiling, it’s not a floor. They should be focused on what’s the goal and how are you going to reach it?”

The fight over the refugee cap encapsulates a dilemma confronting HIAS as the agency moves from Trump to Biden. On one hand, HIAS leaders are glad that the United States no longer has a president who opposes refugees, separates families at the border and fires up his base with anti-immigrant rhetoric.

On the other hand, they say that Trump did so much harm, and made immigration so heated an issue, that it will be a challenge just to bring the immigration and refugee systems back to where they were before Trump. Returning to a point in which the U.S. allows hundreds of thousands of refugees a year, and passing immigration reform through Congress, these leaders say, feels even more daunting.

“It’s just a relief to have that administration in the rearview mirror,” said Melanie Nezer, vice president for public affairs at HIAS. She  dubbed the Trump era “the fire swamp.”

But Nezer is cognizant as well of “the sheer amount of time, effort and creativity it’s going to take for the new administration and those of us who work on these issues to unravel and fix it.”

“The prior administration really decimated our infrastructure, our systems, our staffing,” she said. “It’s stunning to think about the damage that was done.”

In a sense, the Trump administration thrust HIAS into a new era in its history. Founded in 1881 as the Hebrew Immigrant Aid Society, the agency at first was a resource and aid to waves of newly arrived Jewish immigrants from Eastern Europe. Later it worked to resettle Holocaust survivors and Soviet Jewish refugees.

In the years after the Soviet Union’s collapse, HIAS shortened its name to the acronym and pivoted to resettling non-Jewish refugees and mobilizing the American Jewish community around advocating for immigrants and refugees.

Days after taking office, Trump announced that he was banning all refugee entry, and while refugees never stopped coming, the numbers plummeted to a fraction of what they once were. HIAS resettled 3,844 refugees in Fiscal Year 2016, but only 1,171 two years later with Trump in office.

Trump’s actions on immigration, beginning with the travel ban, spurred a flood of donations to HIAS. Since Trump’s term, the agency more than doubled its annual budget to $90 million. But resettling refugees — how the organization had once spent the majority of donations — became unprecedentedly controversial and difficult.

With its windfall, HIAS sued the Trump administration over its travel ban, increased its advocacy work and shifted its weight outside the U.S. The organization opened offices in Mexico to help people who were camped on the other side of the border. Overall, it opened offices in five new countries, sending its total to 16 foreign offices. Rather than helping potential refugees reach the United States, HIAS assists them in accessing resources and obtain rights and legal status in their home nations. And the agency increased its fundraising work in Europe.

“We decided we needed to do the work where the refugees are and where they need us,” Nezer said. “Resettlement is such a wonderful, humanitarian positive solution for people, but it’s only a solution for a small number of refugees.”

One advantage of the work abroad is that it can be far less dependent on the U.S. president. In Ecuador, for example, where HIAS has 420 employees and 17 offices, the group focuses on refugees fleeing conflicts in Colombia and Venezuela.

Asked whether the 2020 election changed anything, Sabrina Lustgarten, who has managed the agency’s work in Ecuador, said “We haven’t seen any change with Trump and with Biden.”

Perhaps the nadir of the Trump era for HIAS, as for the entire American Jewish community, came on Oct. 27, 2018, when a white supremacist wrote on social media that “HIAS likes to bring invaders in that kill our people. I can’t sit by and watch my people get slaughtered. Screw your optics, I’m going in.”

Soon after, he entered the Tree of Life synagogue in Pittsburgh and perpetrated the worst antisemitic attack in American history, killing 11 Jews as they prayed on Shabbat.

“It was a real wakeup call for us,” Hetfield said, adding that before the Trump era and the shooting, he had thought resettling refugees was relatively uncontroversial.

Until the Trump administration, according to the Pew Research Center, the United States consistently let in more refugees than the rest of the world combined, no matter who was president.

“We were such an apple pie issue,” he said. “We didn’t have to worry about security, and now we realized we’re just like every Jewish agency, yet we have to create an environment that’s a welcoming environment because that’s the whole theme of who we are. It’s really hard.”

HIAS was only one piece of Jewish activism on behalf of immigrants in the Trump era. Another group, Never Again Action, was founded in 2019 and quickly received national attention for demonstrating in front of ICE detention centers, blocking the entrances and being arrested. The tactics were the most explicit expression of frustration in an American Jewish community that, divided as it might be on other issues, has historically championed the rights and plights of immigrants.

Stephen Lurie, one of the group’s organizers, said the group hopes to stress that even if, from its perspective, the Biden administration is saying the right things about immigrants, it can be pushed to do more.

“One of the challenges that we’re facing, or anyone that’s doing advocacy on this front faces, is that people may believe that the administration is doing the best it can already, and that is demobilizing,” Lurie said. “There actually is still a big gap between what they can do and what they are doing.”

Friday’s announcement drove that gap home to Hetfield. He still sees the Biden administration as an ally rather than an adversary. And he’s happy that the changes Biden did make will allow resettlement agencies to meet the limit of 15,000 refugees this year.

But Biden’s decision to delay raising the limit means that, just like in past years, Hetfield is looking to the future, hoping for better news.

“We don’t know if they’re clarifying or backpedaling or what,” he said following the White House’s second announcement. “They should just raise the damn ceiling and figure out how many refugees they can bring in under that ceiling, and what’s the plan for doing it.”