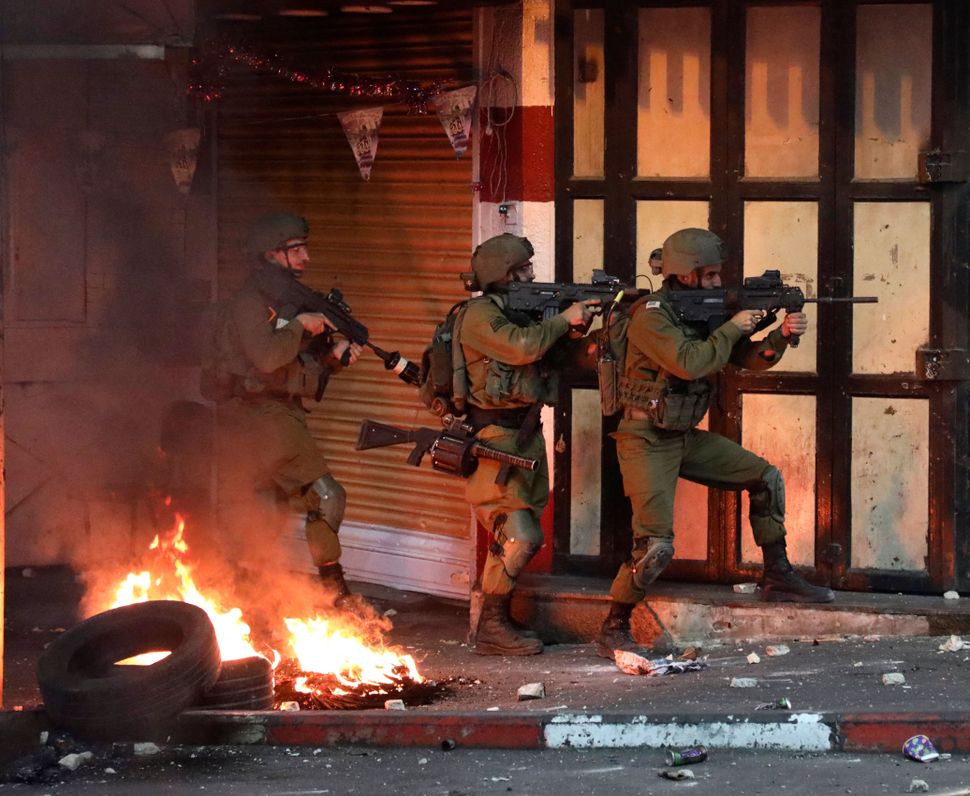 Israeli soldiers take aim during clashes with Palestinian protesters in the city center of Hebron in the occupied West Bank. By HAZEM BADER/Getty Images

At least 182 Palestinians and 12 Israelis have been killed over the last week of intense fighting between the Israeli military and militants in the Gaza Strip. The Gaza health ministry says the dead there include 52 children, and that there are about 1,2000 wounded from airstrikes and artillery fire. On the Israeli side, two children and a soldier were among the dead.

Gaza authorities reported two dozen people killed overnight Saturday in a single strike, the most severe since this round of battle began on Monday. Rescue services said the toll was likely to rise, as there were still people trapped under rubble. The dead included two doctors, the director of an internal medicine department and a psychologist, authorities said.

Earlier Saturday, Israel had drawn condemnation for an attack on a 12-story building that housed offices of the Associated Press, Al Jazeera and other media outlets. The building, called al-Jalaaa, had A.P. cameras positioned on the roof that sent images of Israeli airstrikes and Hamas rockets to news organizations everywhere.

“The world will know less about what is happening in Gaza because of what transpired today,” Gary Pruitt, president of the Associated Press, said in a statement.

The IDF Tweeted that the building was a base of Hamas military operations. But Joel Simon, executive director of the Committee to Protect Journalists, said the attack “raises the specter that the Israel Defense Forces is deliberately targeting media facilities in order to disrupt coverage of the human suffering in Gaza.”

Also on Saturday, an Israeli man was killed after a barrage of rocket fire targeted Tel Aviv and central Israel, shattering two days of relative calm in the region.

And President Joe Biden spoke separately to both Prime Minister Benjamin Netanyahu and President Mahmoud Abbas of the Palestinian Authority. The official White House readout of the calls said Biden updated both on U.S. diplomatic efforts to restore calm in the region, and on both calls expressed concern about the loss of civilian lives, including children.

On the Abbas call, the official account said the two men “expressed their shared concern that innocent civilians, including children, have tragically lost their lives amidst the ongoing violence” and that Biden “expressed his support for steps to enable the Palestinian people to enjoy the dignity, security, freedom, and economic opportunity that they deserve.”

“The president also underscored his strong commitment to a negotiated two-state solution as the best path to reach a just and lasting resolution of the Israeli-Palestinian conflict,” the readout said.

With Netanyahu, the White House said that Biden “reaffirmed his strong support for Israel’s right to defend itself,” condemned “indiscriminate” rocket attacks from Hamas and other terrorist groups in Gaza,” and “shared his grave concern” about Arab-Jewish violence inside Israel. He also “raised concerns about the safety and security of journalists and reinforced the need to ensure their protection,” the readout said, and “expressed his support for steps to enable the Palestinian people to enjoy the dignity, security, freedom, and economic opportunity that they deserve.”

The United Nations Security Council was set to meet about the crisis on Sunday, as Israeli news outlets reported mounting international pressure for a ceasefire.

But Netanyahu suggested in a televised speech on Saturday night that the fighting may go on awhile.

“The party that bears the guilt for this confrontation is not us, it’s those attacking us,” he said. “We are still in the midst of this operation, it is still not over and this operation will continue as long as necessary.”