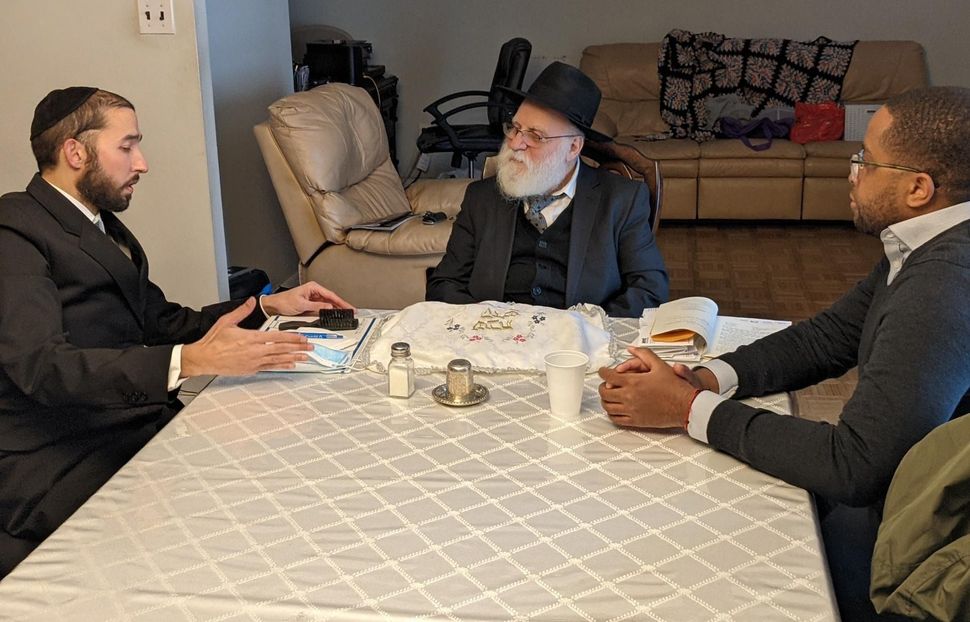 Senator Zellnor Myrie and Assemblyman Simcha Eichenstein speaking to a Holocaust survivor in Crown Heights who struggles with bank fees on reparation payments. Image by Courtesy

Two New York lawmakers have introduced new legislation that would require the state’s department of financial services to maintain a list of banks that have agreed to waive wire transfer and other processing fees for Holocaust reparation payments.

Senator Zellnor Myrie, who represents the 20th District – which includes the neighborhoods of Crown Heights, East Flatbush and Park Slope with significant Jewish populations – said the bill is aimed at fully eliminating the bureaucracy of Holocaust reparations paid by Germany, Austria, and other countries to victims persecuted by Nazi Germany or its allies.

An estimated 20,000 Holocaust survivors currently live in New York City. Last December, the agency requested state-chartered banks to voluntarily waive foreign transaction or wire fees – ranging from $15 to $40 per transaction – and published a list of the banks that have agreed to do so. But they account for less than 5% of New York’s financial institutions and, since it’s not mandated, the public is not aware of all banks that do so.

The bill, also introduced in the State Assembly by Simcha Eichenstein, a Democrat of Brooklyn, would require the department to maintain and annually update the list for the public and to encourage and incentivize other banks to waive fees.

“Survivors of the Holocaust should not at all be having to worry about fees that are tacked on to the reparations that they so justly deserve,” Myrie said in a recent interview. “One person’s $15, that is groceries, that is food.”

Myrie, the son of Costa Rican immigrants who was elected in 2018 after defeating Jesse Hamilton, an incumbent with close ties to the Jewish community, said he introduced the bill as a measure to reduce costs for all people in the midst of the recovery from the COVID-19 pandemic. But it also carries symbolism in the wake of a spike in antisemitic attacks across the city. Recent police department statistics showed a 275% increase in attacks targeting Jewish people this January, compared to the previous January.

“It’s also significant for us to pay homage to those who experienced the worst of the worst,” he added, “and to say we are going to do everything that we can as a state to honor that memory and heritage.”

Myrie said he expects the state legislature to take up the bill in the Banks Committee and hopes to sign on co-sponsors and pass it before the end of the legislative session in June. “Frankly, this bill is one of the few bills that I think should pass unanimously in both houses,” he said. 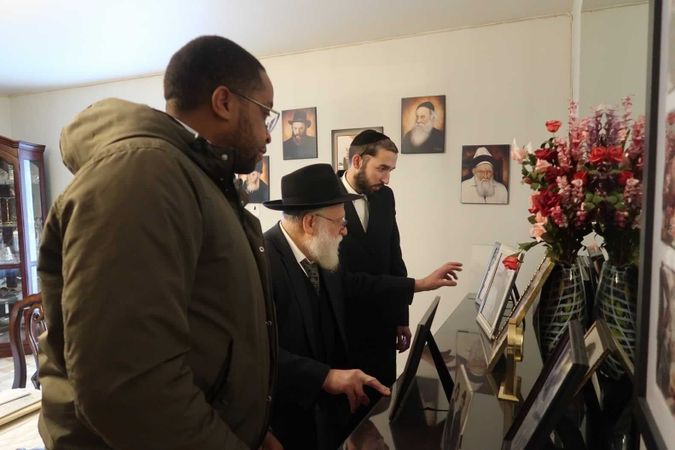 Senator Zellnor Myrie and Assemblyman Simcha Eichenstein speaking to a Holocaust survivor in Crown Heights who struggles with bank fees on reparation payments. Image by Courtesy

Myrie and Eichenstein recently met with several Holocaust survivors who shared their frustrations about the fees they are charged. Eichenstein called it “inexcusable.”

“I see these survivors on the streets of my neighborhood, and I am in awe of their spirit and courage,” he said.