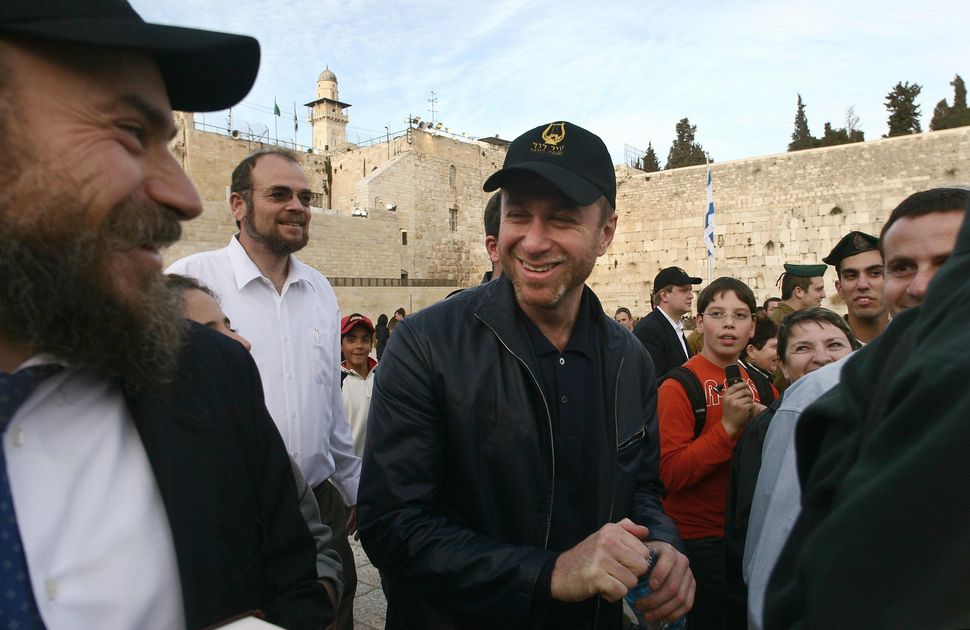 Abramovich at the Western Wall in 2006. Representatives for the Russian oil magnate say he has donated $500 million to various Israeli and Jewish causes over the past two decades. By Orel Cohen/AFP via Getty Images

The European Union froze the assets of Roman Abramovich and banned his travel Tuesday, becoming the latest governing body to impose sanctions on the Russian billionaire and Jewish philanthropist believed to have close ties to Vladimir Putin.

Abramovich, an aluminum and oil magnate who attained celebrity as the owner of Chelsea FC, a West London soccer team, is also a prominent donor to Jewish causes in Israel, where he gained citizenship in 2018 through the country’s Right of Return law.

But in spite of his efforts in recent years to establish himself outside of his home country, Abramovich, 55, has seen his wealth assailed and his reputation crumble in the weeks since Russia invaded Ukraine.

The United Kingdom added him to the list of dozens of oligarchs on its own sanctions list last week, and froze the bank accounts of Chelsea Football Club, a franchise Abramovich’s money had transformed into a juggernaut.

The Israeli Holocaust museum Yad Vashem, which recently announced an eight-figure donation from Abramovich and whose director had asked U.S. ambassador to Israel Tom Nides to exclude him from sanctions, suspended its relationship with the museum’s second-largest donor.

And in Portugal, where Abramovich gained Portuguese citizenship by claiming Sephardic heritage, his application — and the rabbi who certified it — are now being investigated.

In a statement, the EU said Abramovich “has had privileged access to the (Russian) president, and has maintained very good relations with him. This connection with the Russian leader helped him to maintain his considerable wealth.”

The sanctions came a day after the BBC published an investigative report revealing that Putin had helped Abramovich secure monopolies in the Russian oil and steel industries through rigged auctions.

Already, Abramovich — net worth estimated at $12 billion before sanctions were imposed — had been described as Putin’s “favorite oligarch.” The relationship between the two has been compared to that of father and son.

A bond that raised eyebrows in the past became untenable after Putin invaded Ukraine.

In the first few days of the Russian invasion, as calls to sanction him grew louder in Parliament, Abramovich reportedly volunteered to mediate between Russia and Ukraine, where his maternal grandparents were born. He also voluntarily stepped down from day-to-day operations at Chelsea, entrusting stewardship of the club to its charitable foundation, then announcing he would sell the team with proceeds of the sale going to “victims of the war in Ukraine.”

Russia continues its assault on Ukraine, a country that has tens of thousands of Jewish citizens, and Abramovich — whose representatives maintain has no sway with Putin — became the latest oligarch squeezed.

The sanctioning countries are hoping that targeting Putin’s oligarchs, in addition to building pressure on the Kremlin to back off in Ukraine, will reduce the influence of ill-gotten wealth in their national affairs.

What impact the asset freeze from the 27-country EU will have on Jewish organizations is not immediately clear. An Abramovich representative said in 2020 that he had donated some $500 million to Israeli and Jewish organizations over the previous two decades. Abramovich was also described by Politico, along with fellow Russian oligarch Lev Leviev, as Chabad’s “biggest patrons worldwide.”