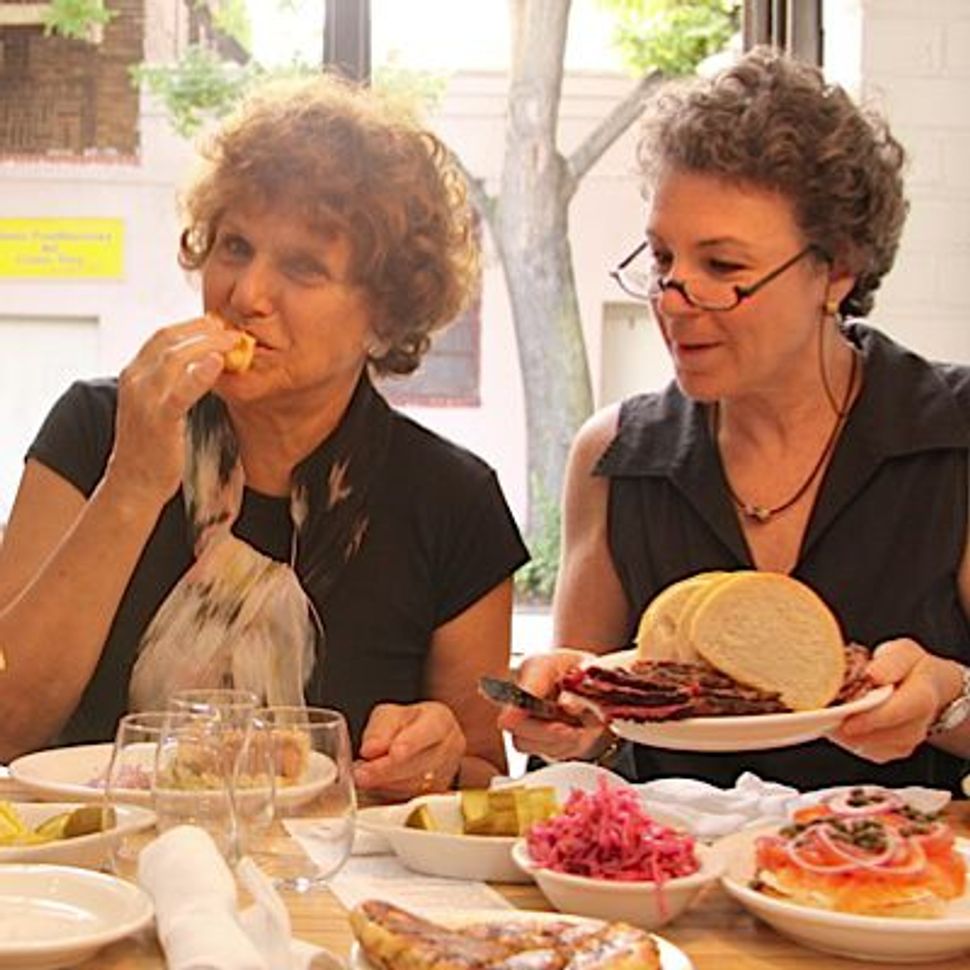 Fresn, or the Yiddish word for intense eating (in this case, in the best possible way), is really the only word to describe a day spent feasting and exploring Brooklyn with Jewish cookbook author and New York Times Dining section writer Joan Nathan.

Last Wednesday I, along with food writer Jeffrey Yoskowitz, had the pleasure of touring Joan Nathan, her son, who is a private chef, and two of her friends around the Brooklyn food world to explain why New York’s arguably most-food obsessed borough is drawing national attention.

Full of young passionate foodies, many of whom have hyper-specialized in artisanal comestibles such as pickles, ricotta cheese, chocolate and meats, the borough’s chefs and home cooks are reviving long gone food prep traditions and are mixing them with local ingredients and eco-conscious practices, creating a blend of modern and traditional food that is uniquely Brooklyn.

At The Brooklyn Kitchen, a hub of the borough’s food movement where Brooklynites can learn to bake sourdough loaves, brew beer at home, and ferment pickles from local chefs and business owners, Nathan declared: “I should’ve been in your generation.” She went on to swap straining techniques to remove sediment from home made wine — which she is preparing for a friend’s son’s bar mitzvah — with co-owner of the shop Harry Rosenblum.

While exceptionally passionate cooks in the Jewish community like Nathan may be concerned with such matters, the Jewish world has historically been more focused on kashrut than where the flour for their shabbos challah comes from, or whether its pickles are fermented or cured. But, with the effects of the Brooklyn food movement stretching far beyond the borough, Jewish foodies wonder: When will this world of slow, artisanal, eco-conscious and exceptionally delicious food come to the Jewish world?

Naf Hanau the founder and owner of Grow and Behold, a small pasture-raised kosher chicken company based in Brooklyn says, “The kosher market is yearning for it.” “Or they’re just starting to,” Forward ingredients columnist, Leah Koenig followed up, over our first lunch of the day — grilled Grow and Behold chicken, homemade chopped liver, hummus and Adamah pickles — in Naf and his wife Anna’s Brooklyn Sukkah.

Noah Bernamoff, owner of Mile End deli (the next stop on our tour), “A Montreal Jewish Delicatessen in Brooklyn,” is reinventing the Jewish deli by preparing traditional dishes like smoked meat (a cousin of pastrami) and brisket hot dogs in-house and with high quality ingredients. “We source the best quality and manipulate our ingredients as lightly as possible,” Bernamoff said of the nine-month old shop that New York magazine dubbed the best deli in the city. And while Bernamoff’s deli is not kosher, it is a prime example of a modern Brooklyn interpretation of classic Jewish fare. “What Noah and Rachel have done at Mile End is take a first step toward a new future for Jewish deli in New York,” David Sax, author of “Save the Deli,” wrote on his blog after a visit.

Another stop on the tour, where we met Jason Marcus, chef-owner of Traif, a restaurant whose cuisine centers around bacon and shellfish and is located on the border of a Hasidic neighborhood, revealed an unusual demand for “Brooklyn cuisine” from the Jewish community. His restaurant opening was attended by several ex-Hasids who were intrigued by the food and Marcus has even delivered food to a curious Hasidic man who arrived in a van outside of the restaurant after calling before and requesting a meal made entirely of treyf items, which he wanted to sample. Somewhat unintentionally (by cooking “the food I love”) Marcus offers an unusual critique on Jewish food in Brooklyn.

As we wrapped up our day in an old Italian neighborhood of Brooklyn with our stomachs full (by my count we ate 1 breakfast, 1 salad course, 2 lunches, 1 dessert and several other snacks), I felt optimistic that the Brooklyn food world is beginning to meld with the Jewish food world in unique and often surprising ways. My stomach and palate eagerly await their creations.

Editor’s Note: Check back at the end of October for a podcast on the blog with Joan Nathan and Leah Koenig about Nathan’s upcoming book “Quiches, Kugels, and Couscous: My Search for Jewish Cooking in France.”