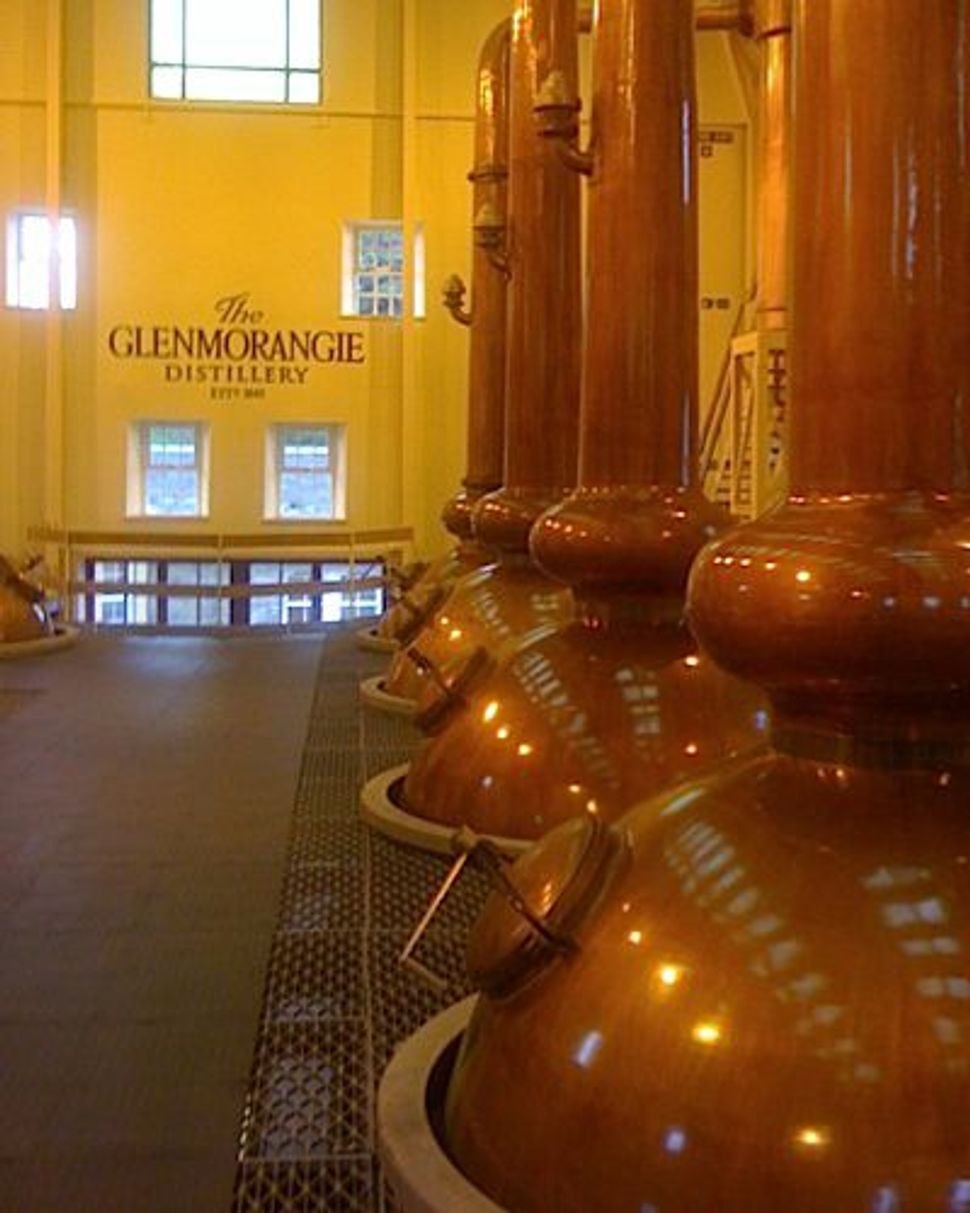 In the summer of 2010 kosher-observant whisky drinkers were surprised to hear that the OU had just certified three scotches from the LVMH Group (Moët Hennessy – Louis Vuitton) — Glenmorangie Original, Glenmorangie Astar and Ardbeg. These were three among many with no hekhsher that had long been enjoyed by minyans and at Jewish celebrations across the world.

There seems little halachic rationale for certification. By law, custom and practice scotch whisky must be produced solely from malt, barley and water with the intercession of some distiller’s yeast. No animals are harmed in the process, cultic practices are not invoked and adulteration of the spirit would be a shande to the distillery (though they might not use that word).

Ardbeg is on the island of Islay in the west of Scotland, but the Glenmorangie distillery is on the drier east coast. It’s perched above the swampy shore of Dornoch Firth just downhill from Tarlogie Springs from where it receives its pure, clear water. In my role as intrepid whisky correspondent for the Forward, I was happy to investigate what distinguishes an OU kosher malt from, well, a non-OU kosher malt by visiting the Tain distillery where the Glenmorangie whiskies are produced.

An account of his visit to the distillery will appear in the Forward soon but for those who are already thinking about stocking up for Purim here are my tasting notes, including some rarer whiskies below.

You may already have tried this but it is dependable and a description bears repeating. Fruity and with a pleasing floral bouquet, the Original is a stalwart of the casual drinker. Occasional nose notes of vanilla or the most ethereal of banana or peach vapors that are brought out with a dash of water complement a decent solid body. The sum adds up to a whisky that won’t let you down but won’t convert the masses — but you knew that anyway!

Aged in casks that Glenmorangie has specially designed from oaks on the “leeside slopes of the Ozarks” and then leased to bourbon companies for a single use, the Astar packs a pungent bite. Dark notes of cinnamon or molasses hijack the signature floral bouquet of the central Glenmorangie spirit. The kick of the first sip merely emphasizes the strong nose that it presents and suggests that it is best drunk with a little water. An intriguing attempt to counterbalance Glenmorangie’s reputation as a gentle whisky, Astar is pleasant and has a good story but is still a little unsubtle in its assertions.

This is a whisky for the discerning wine drinker. Quinta Ruban is matured in port casks whose flavors complement the floral and fruity essence of the base. The nose is markedly gentler and broader than the Original, with fuller peach notes that even tend to the tart spiciness of a damson plum. Unlike the Original, which only aspires to honey, Quinta Ruban has a honey, grapey, perhaps nectarine-y flavor. It is probably the best value of the Glenmorangie line. If you are having a good red wine with a fleyshik Shabbos meal, this is a great way to welcome the Sabbath Bride.

By using a mix that includes chocolate-malted barley (barley that’s been roasted rather than just dried — no chocolate added!), the distillery is making another attempt to play with the deeper notes of the palate. Significant proportions of older whisky ensure that the flavors of the quickly maturing chocolate-malt whisky don’t carry this away with youthful enthusiasm. It has a chocolate and caramel nose, a dark complex fudginess with some depth. And, on the palate, where the Astar was a little vague in its breadth, the Signet is precise in its variety of flavors and lingering aftertaste. An elegant and unusual bottle (with a surprisingly heavy stopper!) adds to the distinction of this newer Glenmorangie product.

At its price, the 25-year old Glenmorangie ought to be special, and it is. It’s the sort of whisky you’d want to buy Mordechai for a job well done. Where the 10-year old Original was callow, this is mature, where Astar and Signet used shortcuts to reach the darker notes, this just uses time, where the Quinta pandered to grape aficionados the 25-year old is for the single malt drinker. Complex and smooth with woody, almost hazelnut overtones in a wonderfully composed presentation, this top-of-the-line whisky revisits the promise of its younger brethren and completes them. If you have $300 (or more!) to spend on a bottle of whisky you would not go wrong with this — unless of course, you were using it to suspend your ability to tell the difference between Mordechai and Haman.