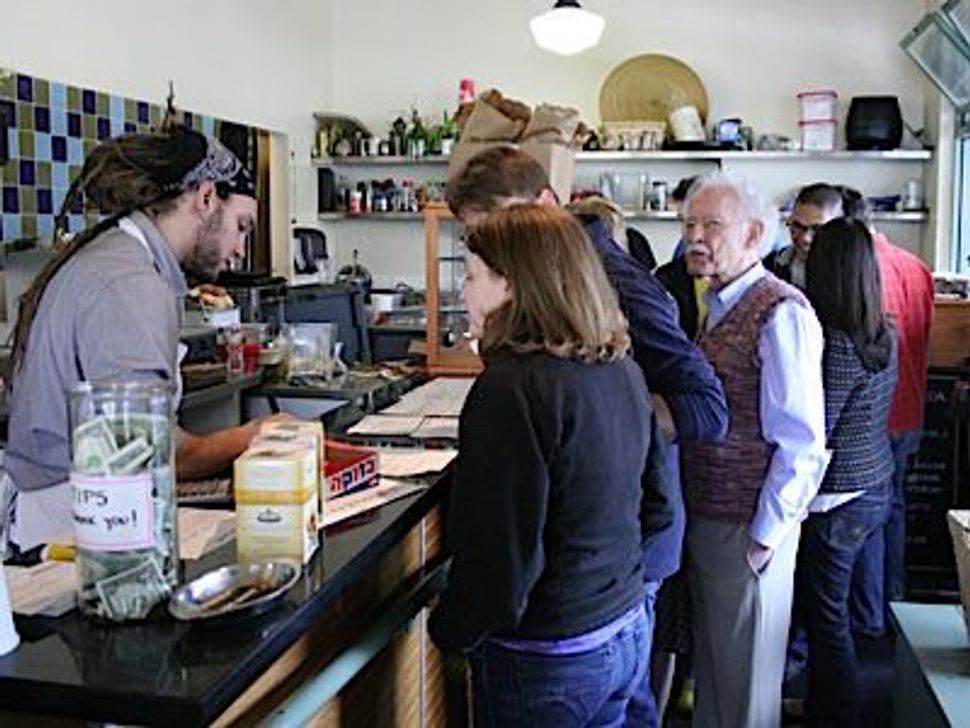 Wise Sons deli only serves food for a couple of hours once a week, but it typically draws a line that wraps around the block and often sells out of their signature pastrami as early as noon. As part of Off the Grid, a group of mobile gourmet food vendors that park in different places around the city, Wise Sons “pops-up” on Saturdays from 9 am to 2 pm at Jackie’s Café in the Mission. Much like Mile End in Brooklyn, or Caplansky’s in Toronto, the chefs of Wise Sons, two U.C. Berkeley grads Leo Beckerman Evan Bloom, house cure and hand slice their own meats, prioritizing quality and flavor over quantity and variety. Beckerman says, “The main thing is that it all has to be delicious. We’re trying to revive, refresh and educate people about this food.”

The Wise Sons menu is small and carefully curated, offering a mixture of non-kosher deli pleasures such as a pastrami and corned beef Reubens with more traditional Eastern European Jewish dishes such as potato kugel, bialys and chocolate babka. Everything is prepared by Beckerman and Bloom — even their traditional rye bread. The pastrami comes in thick slices, peppery around the edges, yet sweet and tender on the inside. The catering menu is more extensive with offerings such as matzo ball soup, beet borsht and chopped liver. They cater upon request, and are soon holding a Passover Seder at Coffee Bar in the Mission.

Beckerman and Bloom started cooking together at Berkeley Hillel and have relied on a wide range of sources from traditional cookbooks, to handwritten family recipes, to spiral-bound Sisterhood cookbooks that Bloom’s grandmother collected to cull together their shop’s recipes. Beckerman and Bloom revive these old recipes and other deli favorites with an emphasis on incorporating fresh, local ingredients. Bloom adapted his grandmother’s mock chopped liver, which called for canned vegetables, to use fresh produce instead.

Another deli that serves some of the City’s best pastrami and corned beef sandwiches does not identify itself as a Jewish deli, exactly. There is nothing on the official Deli Board menu that is traditionally Jewish. But when I first visited Deli Board and waited for my sandwich, a “Boca,” a sandwich packed with corned beef, pastrami and a secret “Board sauce” all on a sweet French roll, I was delighted when the head chef and owner Adam Mesnick stepped out of the kitchen and offered me a small serving of noodle farfel to nosh on as I stood out on the street. In subsequent visits, he has also offered matzo ball soup and blintzes as specials.

Mesnick grew up in a Jewish restaurant family in Cleveland and the Deli Board serves things that many Jewish Delis in Cleveland would serve: pastrami and corned beef sandwiches with pickles and Dr. Brown’s Black Cherry sodas. The sandwiches aren’t kosher, but the pastrami which is salty and savory, would satisfy any Jewish deli connoisseur and the Deli Board, like Wise Sons, has catered local Jewish events.

“It’s a fine line labeling [the Deli Board] as Jewish,” Mesnick says, “If I were in Cleveland, I would label myself as a Jewish deli. The reason why I don’t do it in San Francisco is because the Jewish deli doesn’t work here.” Since many local Jewish delis have opened and closed quickly in the past few years, Mesnick’s resistance to identifying his food as Jewish is understandable. Sure there are a few longstanding Jewish delis in the area, like Saul’s in Berkeley and Miller’s East Coast Deli, but opening a Jewish deli in San Francisco is not a tried and true venture.

What sets Deli Board and Wise Sons apart is that they are experimenting with the traditional Jewish deli formula and trying to reach people who are not necessarily familiar with the culture and the food. “What I’ve done is taken the Jewish deli to another level” Mesnick says, “I think it’s the evolution of Jewish deli.”

Wise Sons specifically identifies as a Jewish deli, but they want to cater to the broader community, says Bloom. “Something we want to emphasize is that we’re a Jewish deli, but we’re not just for the Jewish community. The majority of our customers are not Jewish.”