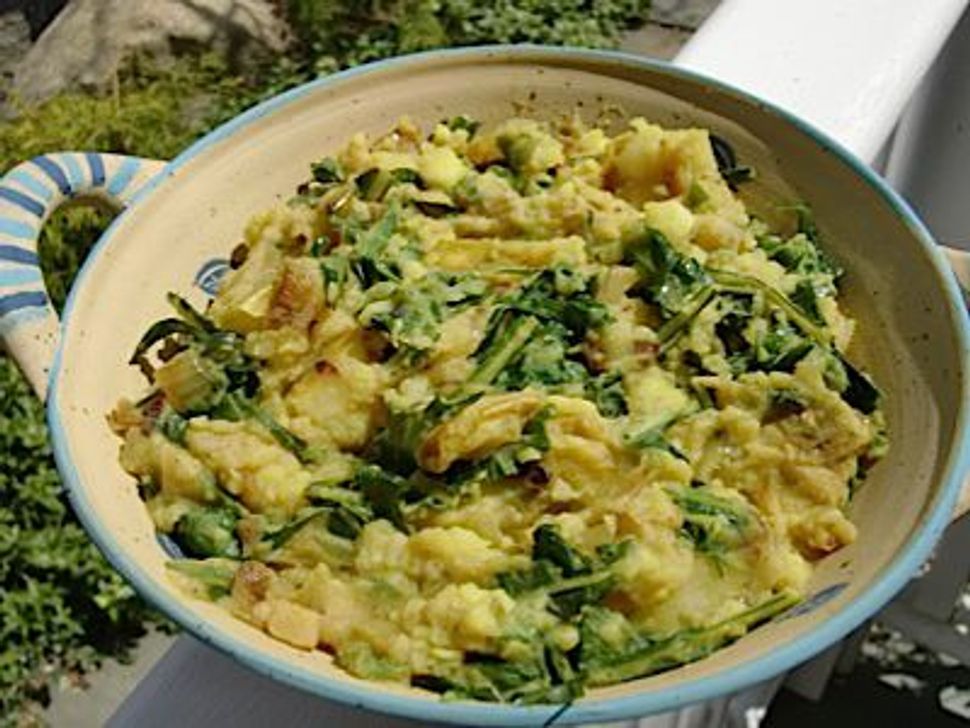 Gearing up for my trip to India in 2009, I was admittedly more excited to eat than sightsee. The curries spooned over rice, the fiery hot condiments, and the intensely sweet desserts made me salivate in nearly catatonic daydreams. I had, however, only experienced Americanized Indian cuisine — in the array of Indian restaurants in Manhattan or from a chafing dish in Whole Foods. I certainly had never prepared an Indian meal myself before. I was not at all prepared for the invaluable epiphany I had in India. The fact is, authentic Indian food is missing from the kosher kitchen and it need not be.

What was disheartening to me was the epidemic of Israeli-style restaurants I encountered in India as a whole — particularly in the Northern city of Dharamsala, where many post-army Israeli men and women seek oasis. Falafel, tehina, and even taboule are everywhere. And not only do Indians and Indian-Jews have a keen understanding of Israeli cuisine, but of Ashkenazic and Sephardic (specifically Iraqi) cuisine as well.

The Knesset Eliyahu synagogue in Mumbai served roasted chicken, schnitzel and both kreplach and kibbeh dumplings when I visited, foods familiar to me and to the pages of kosher American cookbooks. Indians have mastered both the falafel ball and the matzo ball. There is a sense of understanding, and of respect, for all walks of Jewish life through food. This was profoundly touching. Yet, in my time living in Israel and the U.S, how have Jews embraced Indian cuisine? The answer is — generally, we have not.

In an age where our proximity to the McNugget (or a kosher, equally processed equivalent) is far too close for comfort, it has become inherent that often times our attachment to certain foods is purely superficial. We know the taste, the texture, the familiar compact shape — so we keep eating it. We cling to traditions tied to lineage, out of familiarity but not necessarily taste. And in the process we have sort of neglected an entire culinary universe out of intimidation.

I have come to realize that Indian food is sorely misrepresented as difficult to prepare because of various flavor combinations and layers that appear overly complex. We often narrowly associate garlic and ginger with Eastern Asian cuisine, and cumin and tomatoes with Northern Mexican or Middle Eastern fare. Indian food is merely a layering of many of these familiar spices and fresh produce. And what is strikingly accessible yet often overlooked about Indian cuisine, is the fact that so many dishes are vegetarian or vegan and thereby perfect for the kosher kitchen. It is also a cuisine that celebrates local seasonal ingredients. Chickpeas, potatoes, lentils, spinach, rice and durable root veggies are certainly familiar ingredients for the health-conscious kosher cook.

During my trip I had the privilege of touring India with the Jewish-Indian Jhirad family. In a recent conversation with Nathaniel Jhirad, I discussed my favorite Passover dishes. However, unlike myself, Nathaniel didn’t seem to have any. He explained that his family prepares dishes utilizing all the fresh ingredients normally available to them in the springtime. The only difference is the spice profile. In India, popular red gravies are made with crushed, dried, and powdered red chilies. However, Indian-Jews indeed worry about hametz contamination and only use green, fresh and hand-ground chilies during this holiday. This change of spice does indeed alter the taste of the dish, but the seasonal spring ingredients remain the same.

Eager to create an equally seasonal yet authentic Indian dish of my own I have chosen from the produce available to me in New York in early spring — basically, weeds available in your backyard, farmers market, or grocery store. Use your array of fresh and available produce this Passover to bring some India to your Passover or simple weeknight dinner table.

Nettles (often referred to as stinging nettles) can easily be found in your backyard! They are green, low to the ground weeds, with heart shaped and jagged leaves. I recommend you wear gloves when handling and picking nettles as the leaves do benignly sting. If you cannot find any then simply replace the nettle ingredient with more dandelion greens, which are readily available in most supermarkets and health food stores.

1) Boil potatoes in large pot of water with turmeric and cinnamon stick. Cook potatoes until just about fork tender, remove them from the pot and set flavored water aside.

2) Soak and drain nettles and dandelion greens in bowl of very cold water. Be sure to remove grit.

3) Chop onion and sauté in ghee until lightly browned. Add garlic, ginger, and chili paste and cook for a minute.

4) Add greens, peas, and ½ potato water to the sauté. Let simmer for 10 minutes and mash gently with spatula or slotted spoon.

5) Brown mustard and cumin seeds separately in a small pan with ghee and pour over curry mash. Serve with steamed basmati rice or by itself with chopped red onions and cilantro for garnish.

Talia Blau is an Environmental Studies major at New York University and alumnus of Kivunim, a gap-year program in Israel that promotes coexistence and travel and interaction with Jewish communities around the world. In 2009 she visited, studied, and ate her way through ten different countries from Bratislava to Bombay.