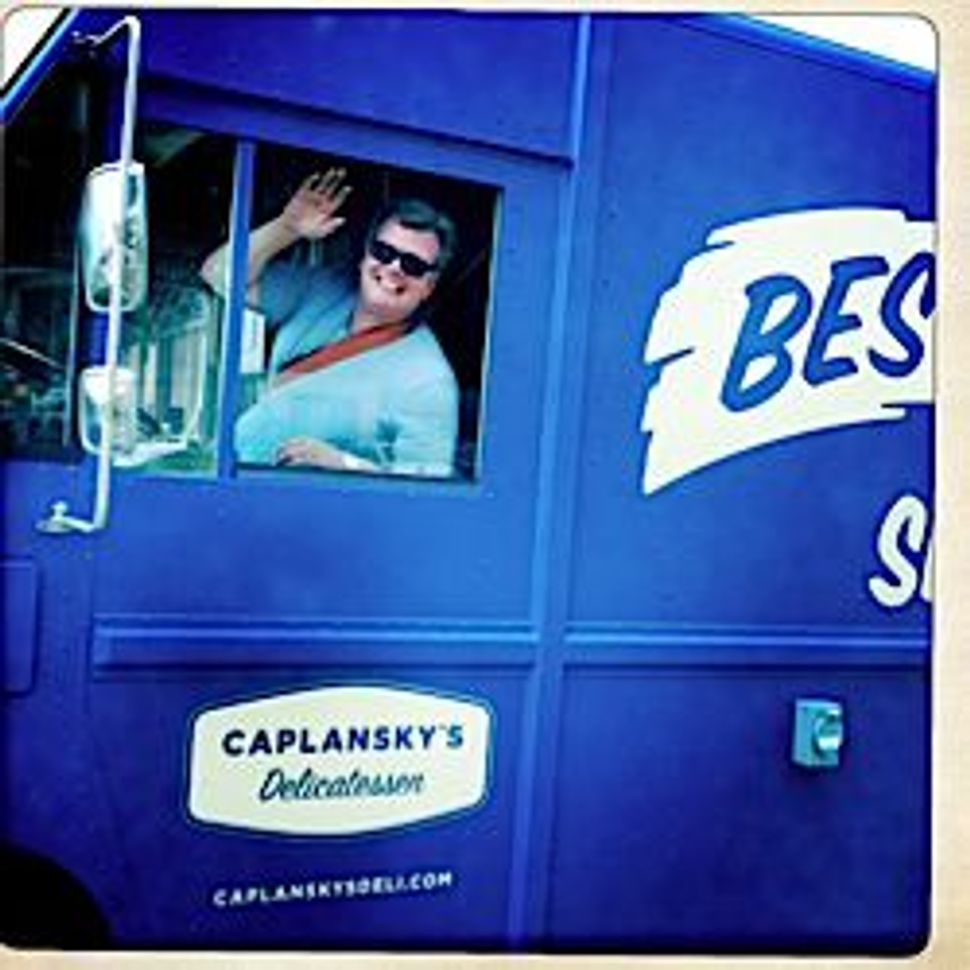 Bad news for the aspiring vendor became a boon for Toronto foodies. Caplansky instead started selling smoked-meat sandwiches from the back of a Toronto bar. Insane demand, fueled by word of mouth, led to the 2009 opening of Caplansky’s, his massively successful deli on the northern edge of the city’s historically Jewish Kensington Market neighborhood. “Caplansky’s did more to put Toronto on the map as a deli city than anyone else in half a century,” says David Sax, author of “Save the Deli” and a Forward contributor.

Last week, Caplansky’s venture came full circle with the debut of “Thundering Thelma” — a bright blue food truck, named for Caplansky’s grandmother, and emblazoned with his bespectacled visage. Thelma dished out its first smoked-meat sandwiches, pickles, French fried, and coleslaw on July 23. A second truck should roll out by fall; along with street food, both mobile kitchens will bolster Caplansky’s thriving catering and special-events operations. Caplansky’s even plotting a national franchise of mobile delis.

Smoked meat — the Canadian cousin of pastrami-like beef that’s spiced, marinated, and smoked to high intensity — is the star at Caplansky’s restaurant location. An old-school-with-a-wink menu also showcases chopped liver, versht (beef salami) and eggs, and brisket, along with a lox-and-onion scramble with latkes named for Rush singer and Caplansky’s regular Geddy Lee.

The 42-year-old Caplansky is fanatically secretive about his much-touted smoked-meat formulation, even demanding that deli employees sign non-disclosure agreements. But — on the weekend his truck hit the road — the peripatetic deli owner did open up to the Jew and the Carrot about rolling out his sizzling brand to Toronto streets and beyond.

“Our smoked meat begins with a long process of brining, curing, smoking with our signature spice rub, which all happens here at the deli,” Caplansky said. As press accounts of the truck’s rollout have noted, its sandwiches are “pre-portioned;” the tiny mobile kitchen made it impossible to hand-slice meat in volume the way Caplansky does at the deli. He opted to heat meat sous-vide — at low temperatures, in a vacuum-packed bag — to expedite his truck orders and maintain tenderness.

In addition to the deli’s regular offerings, the truck will also serve up some unusual specials – think deli tacos, pickled tongue sliders, smoked meat Reubens. “We also have maple bacon ‘glory-hole’ doughnuts on the truck — made with beef bacon, of course,” said Caplansky. Like the restaurant’s offerings, the truck’s fare is Jewish style, but not kosher.

The truck will take Caplansky’s brand of Semitic retro-cool play outside the historically Jewish Kensington Market neighborhood into different downtown neighborhoods. “He brought Jewish delicatessen out of the Jewish neighborhoods and into the vibrant, cosmopolitan heart of downtown. Some love his food, some despise it, but he remains the most important deli man in this city,” commented Sax.

The new meals on wheels also mobilize Caplansky – literally – in his tireless crusade to popularize deli fare. Caplansky is optimistic that the larger Toronto community will embrace it. “Our flagship location offers a sense of nostalgia to many people who grew up…eating deli. I think the truck will get a response that isn’t necessarily related to Jewish nostalgia. People are excited about food trucks roaming the city and about trying new kinds of food,” he said.

Caplansky’s truck comes on the tails of Sixth and Rye. The D.C. based kosher mobile smoked-meat operation was launched in May by ex-Montrealer Spike Mendelsohn.