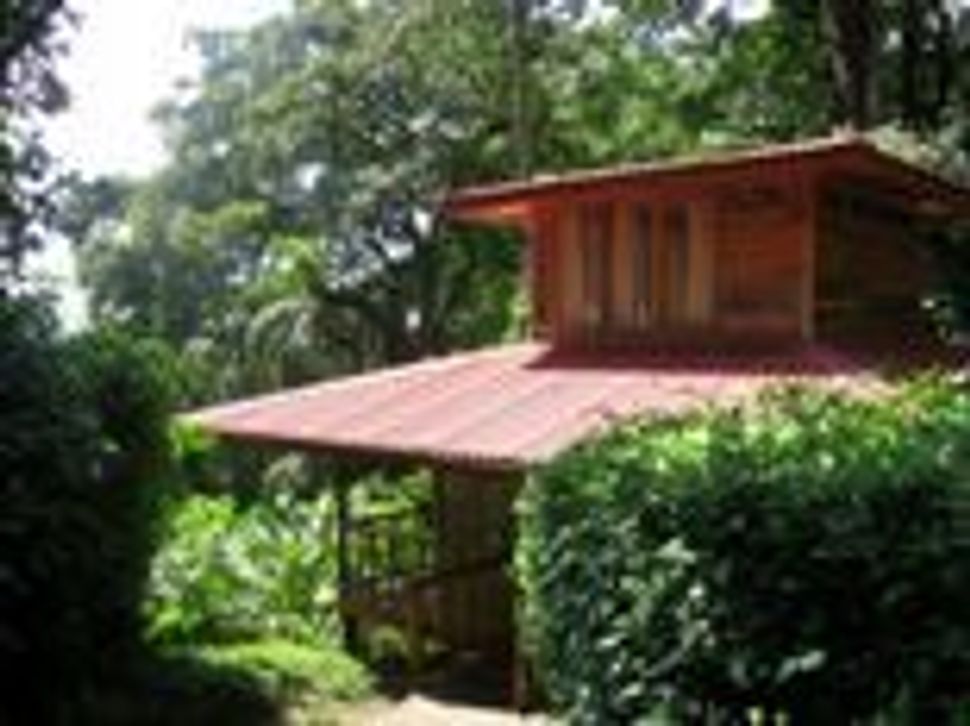 Our bungalow overlooked the mountainside and we woke each day to the sunrise (about 5 am) and the chattering of the monkeys. It was the off season in the Caribbean coast, so we had the resort mostly to ourselves. My family had de facto private sessions with the yoga teacher in the beautiful, octagonal studio.

It rained hard most days we were there but at different times of the day. In the capital city of San Jose, the streets have deep and wide gutters, up to two feet in parts. The locals, called Ticos, carry their babies everywhere, not bothering with carriages, strollers or even slings. People can even steer their bicycles, while holding up umbrellas.

All of us but my husband have studied Spanish — my daughter who is a recent college grad is the most fluent but I surprised myself by remembering words and phrases not used since high school. I realized my mistake in studying only the words of the foods we can eat but not words for the non-kosher species we do not eat. As other friends just back from Barcelona remarked, “there are so many ways to describe pork!” The food offered at the Samasati itself was good vegetarian fare (fish can be ordered for Friday night).

We chose to spend a quiet Shabbat on the mountaintop instead of seeking out the Chabad rabbi in San Jose. We reserved a private tour that was listed as “easy.” What we got instead was a guide who wielded a machete — necessary to hack away at the lusty vegetation — and a sweat-inducing, heart-thumping hike through muddy riverbanks, steep inclines, and rocky streambeds. We were up close and personal with the bugs, fauna, and flora.

Sunday in a Catholic country is pretty quiet, but we stumbled upon a cacao educational plantation and the polyglot European owner consented to giving us a tour. We saw and touched the various plants necessary in the chocolate-making process. We participated in the grinding, kneading, and molding. We were invited to “eat as much as we wanted,” because authentic Costa Rican chocolate is so rich that no one can eat more than a piece or two. We learned that families traditionally make chocolate together during their social gatherings. My daughter wanted to bring cacao beans back to her college campus as a different fun activity, but we couldn’t find any on our last days before heading to the airport.

As our first eco-trip, it offered a phenomenal education. The rain forest is God’s gift to mankind. Scientists are studying the therapeutic and medicinal properties of the plants there as well as the inter-relationships of the creatures. Did you know that a certain species of mosquito has the divine purpose of being the pollinator of the wild banana? We have much to learn and appreciate about this precious Earth on which we live.