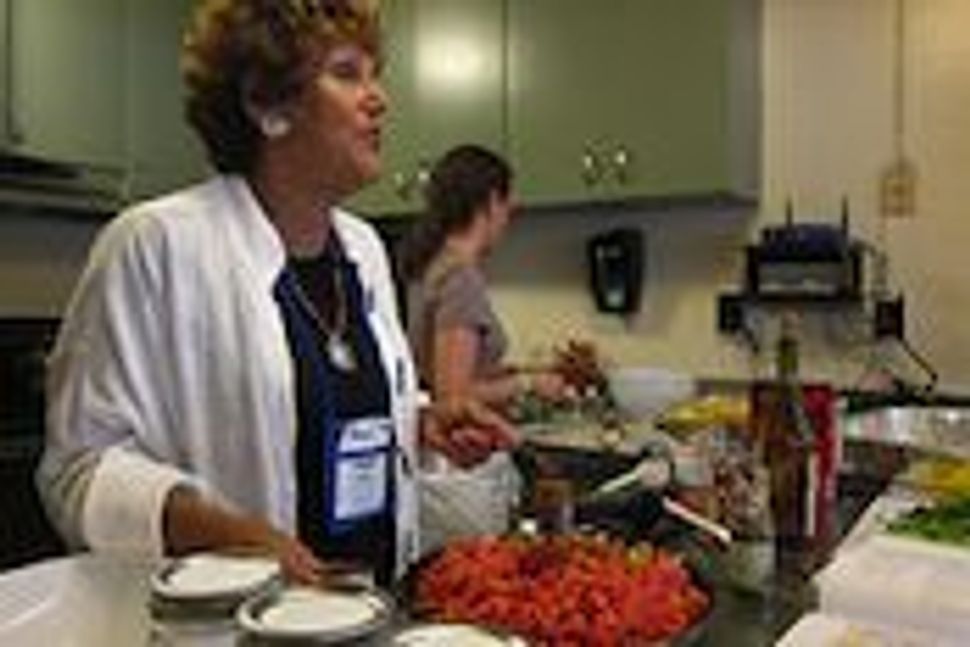 Writing about food can be an experience to savor, according to Jewish cookbook author Joan Nathan. “For me, writing about food is talking about culture and history,” Nathan said at a presentation on food writing on Friday at the Hazon Food Conference in Davis, Calif. The author of ten cookbooks, Nathan also writes about food for the New York Times and other publications from her home in Washington, D.C.

New York journalist Jeffrey Yoskowitz and California food blogger Amiee Kushner also shared their insight into the field of food writing to an audience of around 35 people at the University of California Davis. Yoskowitz, who keeps kosher, chronicles Judaism’s complicated relationship with pork at the website porkmemoirs.com. Meanwhile, Kushner writes a blog for an audience of Jews and non-Jews alike called Jewish Food in the Hands of Heathens.

A central question for food writing is whether or not kosher food and Jewish food are one and the same. “Generally speaking, the vast majority of American Jews are not keeping strictly kosher in their house,” said Kushner, who grew up eating pork and incorporates recipes that are not kosher in her blog. For example, Kushner included a latke recipe styled after In ‘n Out, a burger chain that started in California, made from hamburger meat and cheese.

All three authors offered advice to aspiring food writers on how to create a recipe for success. Nathan emphasized the importance of forming relationships with editors and timing story proposals. “Don’t pitch an article for the Jewish holidays a month in advance,” said Nathan, who said holiday coverage is often planned several months ahead. Nathan also shared with the audience that she received 13 rejection letters from editors for her first cookbook, which she wrote at the age of 27 “on a lark” after living in Israel.

Yoskowitz, who started out writing about food for the Jew and the Carrot, also recommended developing a thick skin for the inevitable rejections writers face. Furthermore, Yoskowitz said online comments made on articles can sting, especially for publications in Israel when politics are involved. “I think the worst invention ever was the [online] comments sections in newspapers,” he said. Yoskowitz recalled an article about pig farmers in Israel that provoked a storm of negative comments from all sides of the issue.

Meanwhile, Kushner advises bloggers to inject personal stories into their writing, as opposed to traditional print journalism that avoids first-person narratives. “I write about myself, my family and my friends. To engage [your readers] in a blog, you have to do that,” Kushner said.

However, all of the authors on the panel enjoy sharing their passion for Jewish food. “I figure if you have good recipes out there, people will make them,” said Nathan.

Nina Davidson, a freelance writer, covers events in her hometown of Denver at http://denver.about.com.