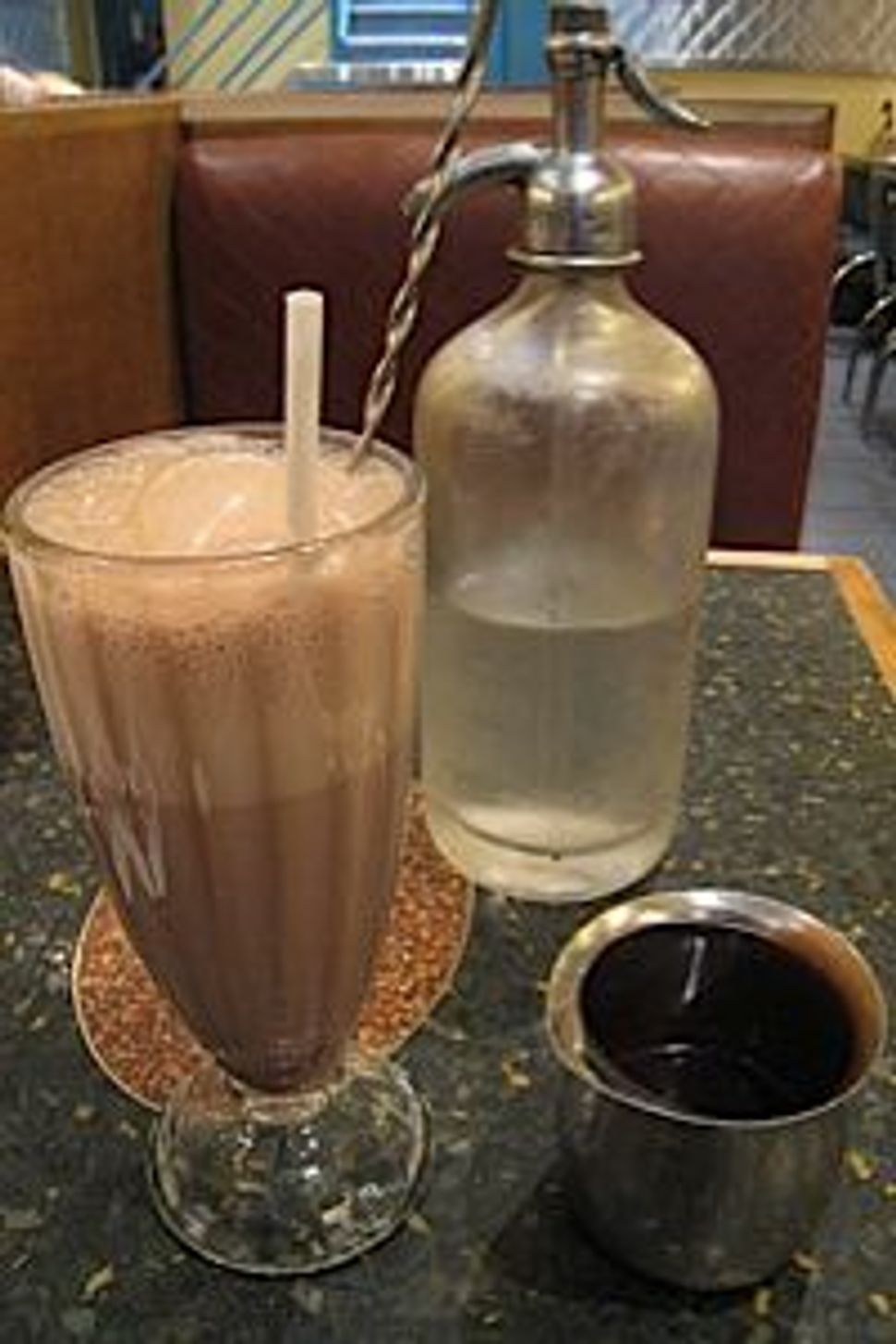 There’s something about an egg cream that can bring out the debate in some people. “There is egg cream on your face,” wrote one reader, “if you fall for those explanations of the egg cream.” Another simply wrote “Hogwash!” Luckily these were letters not to us but the New York Times, throughout the 1970s, in response to articles making one claim or another about the correct way to mix the drink. No egg cream article comes without a slew of detractors. Luckily our readers were more polite in response to Leah Koenig’s recent article, “Egg Creams Make a Comeback”, but were no less contentious. When Koenig described the delicious drink re-imagined to include maple, coffee, and even olive oil, some readers cried foul.

Arguments over the correct way to make an egg cream are nothing new. Disagreements can arise about the ingredients (most traditionalists say nothing will do but Fox’s U-bet chocolate syrup, milk and seltzer), the order they’re placed in the glass, or the proper length of the mixing spoon. As a publication of record, the Forward might not be able to settle this historic debate, but we can at least contribute to the latest round. We want to hear from you on the new breed of egg creams, from the return to classic to the provocative nouveau. To get it started, we asked a range of experts for their take on the topic, inquiring, “What do you think of non-traditional egg creams?” Check out their positions below and add your own.

New York is a constantly evolving city, and with that, its cuisine evolves as well. I certainly love the traditional egg cream — it is almost an art form — but what I love more is that this city allows us to re-create our own versions of the original. And that’s what cooking is all about finding inspiration from somewhere and then using your creativity to make it your own. I know that it is hard to accept change, but in a city of constant forward movement, we must embrace it!

Josh Konecky is the owner of New York City’s Eisenberg’s Sandwich Shop which opened in 1929.

Would I drink one? No. Our restaurant is not going to branch out into anything other than chocolate, vanilla, and coffee (when I can find it). Eisenberg’s is a very traditional place so I stick with the traditional way to make an egg cream.

Jeremiah Moss writes the blog Jeremiah’s Vanishing New York a.k.a. “The Book of Lamentations: A Bitterly Nostalgic Look at a City in the Process of Going Extinct.”

This trend of dressing up the egg cream and slapping a big price tag on it is part of a larger trend in which foodies take the ordinary food of ordinary New Yorkers, like hot dogs and pizza, and upscale them for a more affluent and “discerning” clientele. It’s not unlike the movement of the wealthy into poor and working class neighborhoods. The new egg cream becomes “artisanal” and “exclusive,” just like the new real estate across the Lower East Side. So you could call this the gentrification of the egg cream. It’s a hostile takeover. Leave the egg cream alone — it’s perfect just the way it is.

I think non-traditional egg creams are great. I’m a traditionalist with a broad world-view. I make vegan egg creams with dark chocolate syrup, and I try to use biodegradable cups and paper straws because my audience demands it. I have seen egg creams in bottles, and can’t bring myself to drink one. The food universe is an evolving place, and our tastes fall in and out of fashion.

Barry Joseph, recently profiled David Fox, the owner of Fox’s and Co, the manufacturer of u-bet’s Chocolate Syrup, as part of his upcoming book on seltzer.