Without Flour There Is No Torah 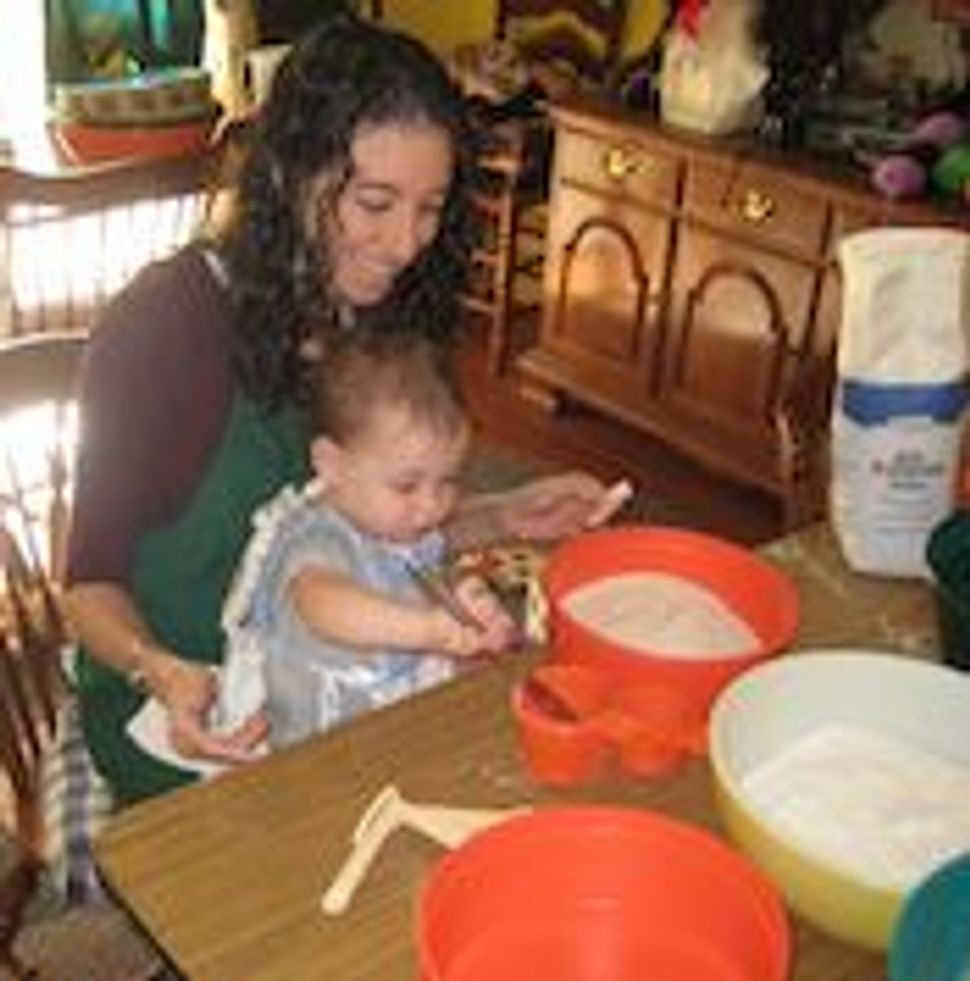 Image by Photo from Noah Farkas

A decade ago, living in New York City, I met the woman who became my wife. During our courtship, she invited me to fly out to California to meet her family, and she warned me about “Baking Day.” For generations, all the women of her family have gathered together on a Sunday during the winter holiday season to bake. They get up before dawn and set to work mixing the various amounts of eggs, sugar, flour, and yeast to make enough breads, pastries, and cookies for all of the extended family members as gifts. My wife informed me that Baking Day is the most important day of the year and not to be missed, and once I caught a glimpse of what Baking Day really was, I knew why.

When I walked past the kitchen door, I could spy the women scurrying about between powdery clouds of flour that hung low in the air like some kind of baker’s fog, sisters and wives arguing over rye seeds and chocolate chips, all over the clamor of the mixer. I heard grandmothers and daughters analyzing the stiffness of egg white peaks like doctors over an x-ray. Yet somewhere between focaccia and snickerdoodles, all basking in the heat of the oven, these matriarchs spoke of the most important things: memories of the past and plans for the future, loves lost and gained. It was almost as if wisdom itself were punched right down that day into the mounds of rising dough.

It’s been ten years since my first Baking Day, and what I learned is that the mixing of butter into flour or the melting of chocolate really isn’t the point. It’s the stories that are told, the wisdom imparted, the values passed on year after year that make Baking Day sacred. Baking Day brings to life the ancient adage “Without flour, there is no Torah. Without Torah there is no flour.” (Avot 3:21) The truth one speaks in the most precious of moments can bring comfort, it can inspire to change the world, or both. And with my wife’s family, it begins in the kitchen. (Without flour there is no Torah.)

What is in a story? Everything. Stories make us who we are as individuals, as families, and as a community. Food, of course, plays an illimitable part of our personal stories, even those from the Torah. Who doesn’t remember the famed lentil pottage that bought Jacob his birthright? What about the night-meal of lamb and matzah, eaten at midnight on the eve of our march to freedom? How about the manna from heaven, which the rabbis claimed came in an every flavor imaginable and likened to Torah itself? Food is the vehicle for transformation, for learning, and for redemption. It sits at the center of our narrative of self, community, and history.

Rabbi Nachman of Bretzlov, the great Chasidic master, taught: “People say stories put them to sleep. I say stories wake them up.” He’s absolutely right. What arises in us as we hear a truth that draws out our empathy should not be taken lightly. It is that emotional tug on our heartstring that pulls us closer, entwining us like the braids of a challah. As a rabbi, I have the privilege to experience these stories everyday. Whether it is under the chuppah or on the bima, I hear the root narratives of hundreds of families. Like the couple that met for the first time when they both wanted the same cake at a bakery, or the Bar Mitzah girl who was the first in her family to have such an honor. I’m so grateful for those truest of moments. Unfortunately, I also hear the stories of heartbreak and anguish, when families are broken by poverty or sickness. Like the family who can’t make it to the end of the month and needs to ration their food because dad has been out of work for a year. Or the mother who has to take a bus for an hour to reach a grocery store with fresh produce because their aren’t any in her section of the city. Or the family I met the other day that won’t go on food stamps because they are ashamed of their loss of standing in the community.

As a Jewish Food Movement, we must not forget that food is only the beginning; it’s a deeper truth we seek, nothing less than a change in how our society is stitched together. Every morsel has a story; every baker, grower, harvester, and eater — we all have stories. For a loaf of bread is not a mere thing, it is product of a series of choices, based on values, that tells us as much about the baker as it does about the consumer. When I hear these darker stories about food something indeed rises within me. I feel angry that our system is failing them, and I feel sad they are in pain; but I also feel heartened to do something about it. All it takes is for one person to hear another’s story and say, “It doesn’t have to be this way.” All it takes is for one hand to take a hold of another, one foot stepping in front of another, one voice adding itself to another, and we move from being sympathetic views of our community to being actors within it. All it takes is an ear to listen, a heart to beat, and a foot to march. Together, when we make better food choices like buying local or joining a CSA, we can manifest a food system that matches our values of goodness and truth. Without Torah there is no flour.

Ever wonder what the very last mitzvah of the Torah is? According to Sefer Chinuch, the 613th commandment, the one to end them all, is to write your own Sefer Torah. As heirs to our very ancient and sacred tradition, each one of us is encumbered with the task of telling and retelling our story. I’d like to think that each one of us has a Torah to write with all of our stories inside, like a sacred cookbook of life. The question is which recipe will you add? What values do you want to bake into your world? This year my daughter turned three. She took her rightful place in the kitchen on Baking Day, amongst the cracked eggs and the strawberry jam, listening to her elders speaking of important things, and I watched as she began to write her own Torah.

Rabbi Noah Zvi Farkas of Valley Beth Shalom in Encino is the founder of Netiya, an L.A.-based network of Jewish organizations focused on food education for environmental and social justice. He can be reached at nfarkas@vbs.org.

Without Flour There Is No Torah