The Best Jewish Food Books of 2011 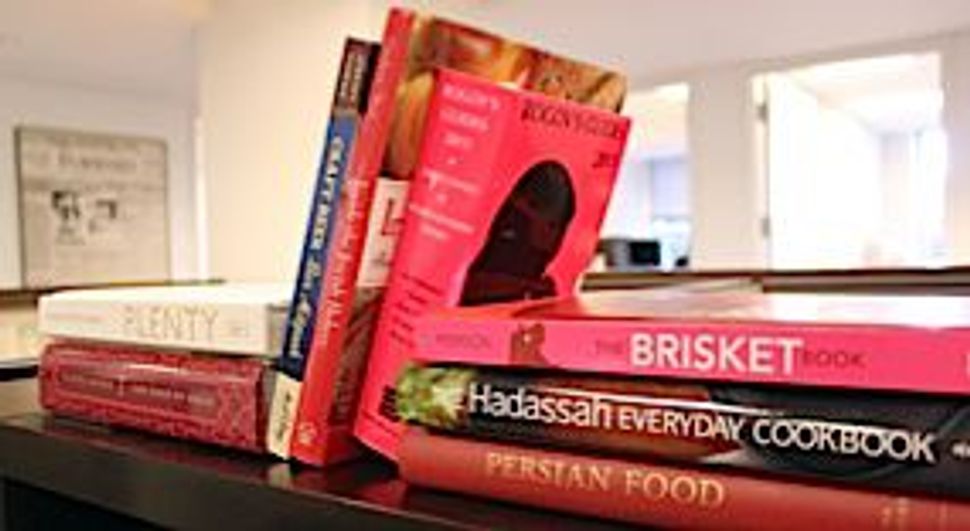 You may not be familiar with many of the authors of this year’s top Jewish food books, but don’t let that keep you from devouring their delicious books. They preserve the recipes of the classic Jewish bakery, provide an easy primer for Persian Jewish cuisine, explore global vegetarian fare and chronicle the path of America’s only Jewish beer. Each would make a great addition to your cookbook collection or the perfect Hanukkah gift. If you’re giving them as a present, consider preparing one of the recipes or purchasing a bottle of wine or beer from the book to go along with the gift.

“Inside the Jewish Bakery: Recipes and Memories from the Golden Age of Jewish Baking” by Stanley Ginsberg and Norman Berg
The marriage of a passionate home baker and a professional bakery, this book lovingly preserves the recipes of traditional Jewish bakeries which are fast dwindling in numbers. Filled with recipes, food history and particularly helpful tutorials for breads like complicated multi-stranded challahs, this book is a valuable resource for anyone interested in making their bubbe’s strudel or recreating a classic bialy.

[“The Hadassah Everyday Cookbook: Daily Meals for the Contemporary Jewish Kitchen”][2] by Leah Koenig
This is not your grandmother’s Hadassah cookbook with recipes from Mrs. Goldstein for gribenes-topped chopped liver. Forward Ingredients columnist Leah Koenig’s first cookbook is a large tome of simple, straightforward and healthy recipes for weekday meals and snacks. As well as recipes for Israeli classics like shakshuka and sabich Koenig puts twists on a handful of Jewish mainstays like tzimmes, which she grills instead of stews. Unlike countless Jewish cookbooks, Koenig’s book thankfully offers numerous dairy recipes and alternatives to using fake cream for pareve desserts.

“The Food of Spain” by Claudia Roden
With recipes from this pork and seafood loving country, “The Food of Spain” is not the obvious choice for the kosher-keeping cook. But, look deeper and you’ll see Roden pays special attention to the tracing the origins of the dishes in her encyclopedic book, several of which have Jewish connections like cocide madrileno, a hearty meat and chickpea stew, which grew out of a Spanish recipe for cholent. The artful matte photos accompany numerous vegetarian dishes and recipes that can easily be made kosher like eggplant fritters soaked in milk and drizzled with honey and several fresh tapas.

“The Brisket Book: A Love Story With Recipes” by Stephanie Pierson
Stephanie Pierson’s brisket book is more ode to this most iconic of Jewish meat cuts than a cookbook, but we don’t mind. Pierson compiles cooking recommendations from Southern BBQ pit masters to famed brisket makers like Nach Waxman and Joan Nathan. Pierson peppers her book with entertaining quotes about brisket like Jamie Geller’s “Nothing says ‘I love you’ like the breast of a cow — or maybe that’s diamonds.” The book’s 30 or so recipes, including cranberry caramelized brisket and brisket braised in stout and onions, provides intriguing options for both the novice and the advanced cook.

Persian Food From the Non-Persian Bride and Other Kosher Sephardic Recipes You Will Love! by Renya Simnegar
For many home cooks, Persian food is intimidating. It calls for spices unfamiliar to many Americans and requires an understanding of cooking techniques like making a tadig (a crust on the bottom of a rice pan). Simnegar breaks down these techniques and introduces readers to common Persian spices and holiday traditions, dedicating a chapter to holidays with a complete menu for feast days. Another chapter focuses on the king of the Persian table, rice, in its many classic iterations. While the book’s tone is often slightly goofy, the book is nonetheless beautifully assembled and photographed and is a good primer for Persian Jewish food.

“Plenty” by Yotam Ottolenghi
London-based Israeli chef Yotam Ottolenghi is a conundrum. He authored the “The New Vegetarian” column for the Guardian for four years, but has never been a vegetarian himself. His exquisitely photographed book “Plenty,” which is also meat free is organized around vegetables and chapters have names like Eggplant, Roots, Leaves, Cooked and Raw and Green Things. While his lists of ingredients for vegetarian fare from around the globe are long, they’re worth it. Hints of his Israeli background seeps through in recipes like roasted eggplant with tahini, shakshuka and his family’s leek fritters.

“Rogov’s Guides 2011: Israeli Wines; World Kosher Wines” by Daniel Rogov
In September Daniel Rogov, Israel’s foremost wine critic passed away. Serving as a food and wine critic for the Israeli daily Haaretz for nearly 30 years, he helped shape and advance the Israeli wine scene. His annual guides to Israeli wine are indispensible for any Jewish wine aficionado and his last one is no exception. His guide to Israeli wines, which is sold with his guide to “Kosher World Wines”, provides an overview of Israel’s wineries and details the characteristics of their wines, rating each with a straightforward star and numerical system.

“Craft Beer Bar Mitzvah” by Jeremy Cowan with James Sullivan
Many a passionate cook and home brewer have fantasized about starting an artisanal food company someday. Jeremy Cowan, the founder and owner of He’Brew (the only American Jewish beer company we know of) documents his company’s coming of age in the beer biz in this beer-memoir. While Cowan’s book won’t give you an exact guide for how to start your own beer company it’ll give you insight into just how far enthusiasm and a bit of shtick can take you.

The Best Jewish Food Books of 2011